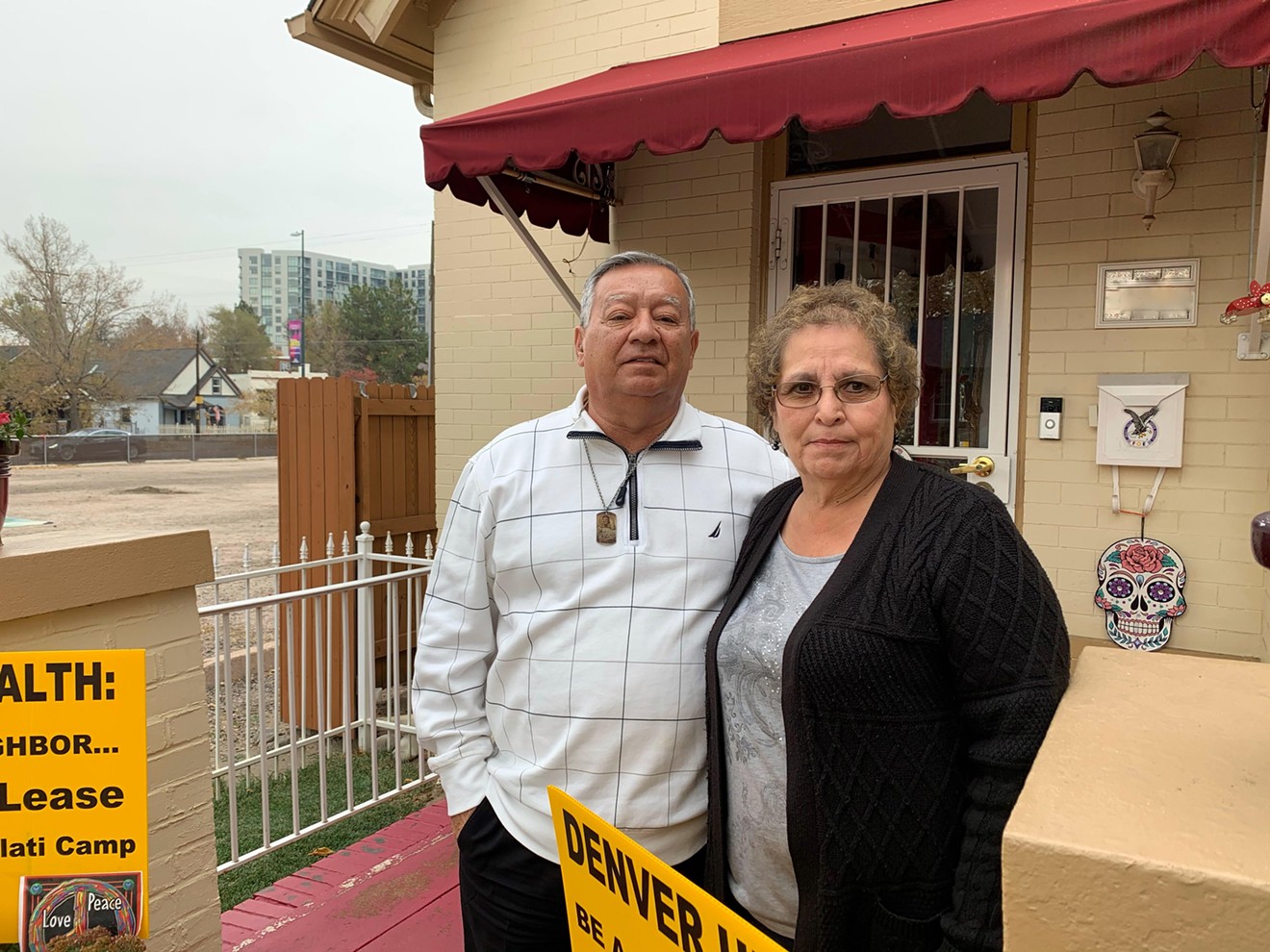 "I, too, am concerned about the unintended consequences, if you will," said boardmember LeAnn Anderson during the four-hour hearing. "I agree that the zoning administrator could not have predicted, perhaps, that parts of that operating plan would not be implemented."

While the five-person board voted unanimously to reject the appeal filed by neighbors, which asserted that Denver zoning administrator Tina Axelrad had erred in issuing a temporary-use permit for the site that is run by the Colorado Village Collaborative, all of the members expressed concerns that the current system for issuing safe-camping site zoning permits isn't working well.

"I agree — there should have been a lot more communication with the neighborhood, with all parties. It definitely lacked that. There’s obviously a lot of issues still trying to be resolved," said Jim Keavney, the chair of the board.

Added boardmember Frank Schultz, "I think the considerations of the neighbors were greatly unconsidered."

Dozens of neighbors had signed on to the appeal that led to the April 5 hearing. And a handful of them testified during the meeting, sharing complaints about the safe-camping site, where 41 residents had slept the night of April 4. The site is equipped with uniform ice-fishing tents, as well as centralized access to sanitation and services.

Although initially wary of the safe-camping site concept, Mayor Michael Hancock had endorsed the program by July 2020, with the first sites going live at church parking lots in the Capitol Hill area in December of that year. The city originally approved the sites as harm-reduction tools to help keep people experiencing homelessness out of harm's way during the COVID pandemic. But the Hancock administration has since bought into the model; Denver City Council approved $3.9 million of funding for the CVC in February to keep running the sites.

Although the concept has proponents among elected officials, city bureaucrats, homeless-rights advocates and even other Denver residents who view the sites as a more humane and cleaner alternative to unsanctioned encampments, opposition has followed the program from the start. Neighbors in South Park Hill filed administrative appeals and a lawsuit to block a site in the parking lot next to Park Hill United Methodist Church. The appeals failed, as did the lawsuit, and the safe-camping site was able to finish out its lease on the property.

Currently, there's a safe-camping site in a parking lot of the Regis University campus, which has been largely non-controversial, and another site in a parking lot next to a Denver Human Services building at 3815 Steele Street. That site is the subject of a permit appeal by three nearby property owners; a Board of Adjustment hearing of that appeal is set for April 19.

This parking lot now houses a safe-camping site.
Conor McCormick-Cavanagh
But the hottest debate revolves around the Elati Street site, which is located on a parking lot owned by Denver Health.

The site is "six feet from my home," Davida Gonzales, who lives with her husband just next door to the site, testified on April 5. Gonzales complained about light from the site entering her home and said she needs to wear an eye mask in order to sleep. "Two years is too long," Gonzales said, referring to the fact that the site could be there until near the end of 2023, since there's an option for two six-month leases after an initial one-year lease ends.

Another neighbor, Jason Robinson, said he worries that site management does not perform criminal background checks and sex offender-registry screenings, and added that "drug and alcohol use should not be tolerated."

A third neighbor, Troy Halouska, pushed back against the idea that the appellants are simply NIMBYs. "It doesn’t have to do with NIMBYism for unhoused individuals. It has to do with the real-life crime elements that have been injected into the neighborhood without any sort of proper process involving the neighborhood to help mitigate that stuff," he said.

Testifying in response, CVC executive director Cole Chandler said that criminal background checks and sex-offender screenings would have a disproportionately negative impact on Black, Indigenous and other people of color. Chandler also noted that the CVC does not allow alcohol or drug use on site, but that staffers employ a "harm reduction approach" when dealing with a resident found using alcohol or drugs on site.

"What we do when an individual is caught with drugs or alcohol, we first make a referral to services, we make services available," Chandler said. "We’ve had a number of individuals who have been able to gain sobriety on site through a number of the services offered here."

Chandler also challenged assertions from neighbors that the Elati safe-camping site is lax on rules, noting that the site has served a total of 68 residents, including 41 there now, and another 14 people that were kicked out of the site for rule violations. Thirteen more former residents have since moved into permanent housing.

The safe-camping site at 780 Elati Street is a Native American-inclusive site, designed to be culturally sensitive to Native American practices and service needs. For example, residents and some CVC staffers hold drum circles on certain mornings. Creating a Native-inclusive site became a priority after the City of Denver swept an encampment located next to the Four Winds American Indian Council at West Fifth Avenue and Bannock Street; that unsanctioned encampment had developed a reputation as a safe space for Native individuals experiencing homelessness. Indigenous people are highly overrepresented in the homeless population in Denver.

Mateo Parsons, executive director of the Four Winds American Indian Council, testified during the April 5 hearing that "approving this appeal will create a disparate impact" for Native individuals. He also hinted that it could open the city to the risk of a civil rights lawsuit.

Although all the boardmembers ultimately agreed that the zoning administrator did not err in issuing the permit for the Elati Street site, they want her to take the concerns expressed by neighbors into account when crafting future permits for other sites.

"What I heard Ms. Axelrad say is that she was listening and that she will take that under advisement when the next permit is issued," said  Anderson.

Safe-camping sites have uniform tents.
Evan Semon
This and the Steele Street case on April 19 will be two of the last major appeals considered by the current Board of Adjustments.

The current members will be able to reapply for their positions as long as they're not prevented from doing so by term limits.
KEEP WESTWORD FREE... Since we started Westword, it has been defined as the free, independent voice of Denver, and we'd like to keep it that way. With local media under siege, it's more important than ever for us to rally support behind funding our local journalism. You can help by participating in our "I Support" program, allowing us to keep offering readers access to our incisive coverage of local news, food and culture with no paywalls.
Make a one-time donation today for as little as $1.