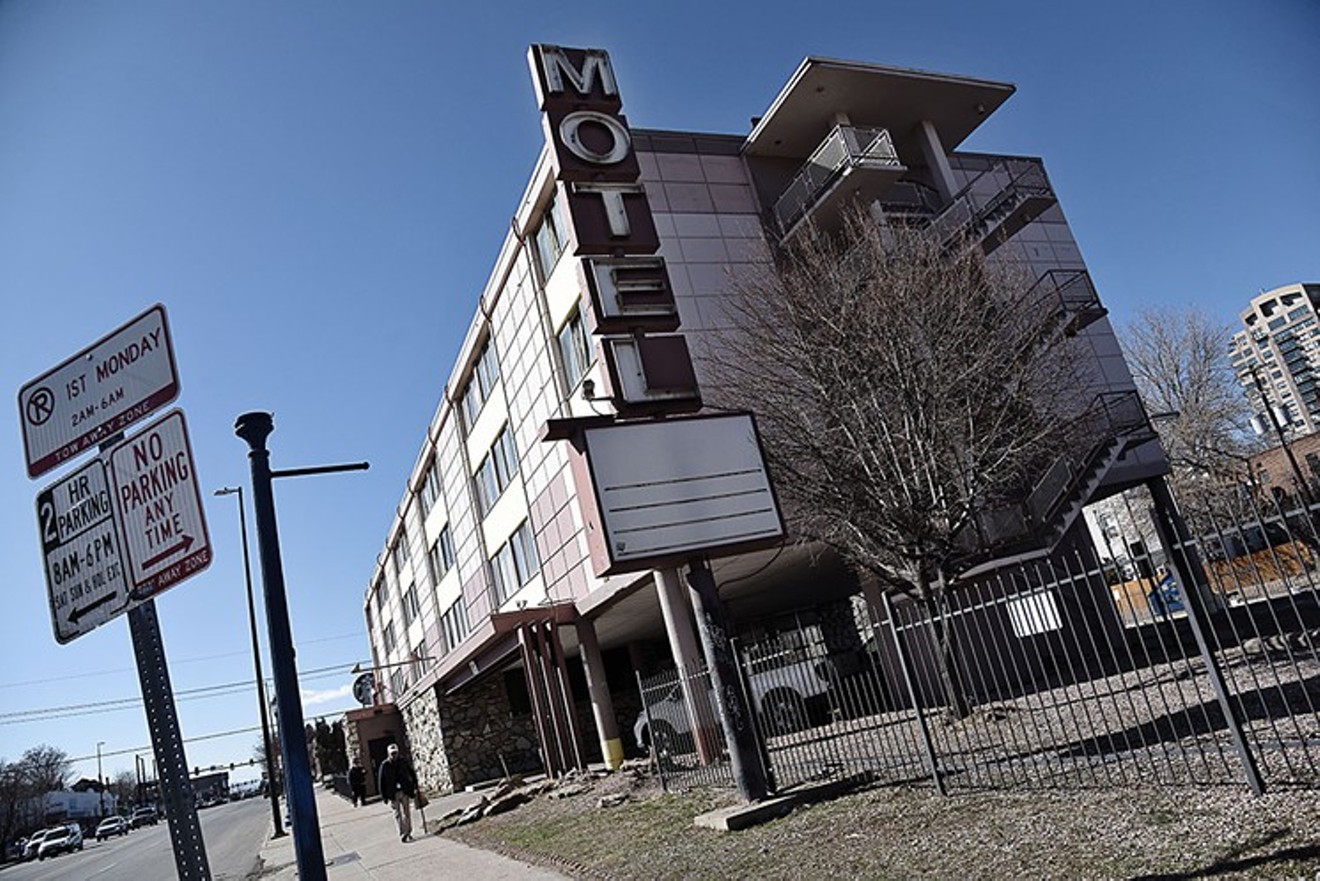 The All Inn today. Anthony Camera
A plan to redevelop the All Inn Motel at 3015 East Colfax Avenue into a boutique motel and restaurant is headed to Denver City Council for a key vote.

On May 24, council's Land Use, Transportation and Infrastructure committee voted to send a proposal to provide Denver Urban Renewal Authority funding for the project to the full council, which will vote after a public hearing at its meeting on June 20.

"Everything just kind of hinges on that date. I’m optimistic, but cautiously so," says Brian Toerber, the project's developer.

"We’re pleased that we’re able to salvage and repurpose a structure that had originally been designed as a hotel in the ’50s and bring life back to it without demolishing it and putting something in that doesn’t match Colfax," he adds.

Working with New Waterloo, a hotel operator based in Austin, Texas, Toerber wants to transform the All Inn Motel, which most recently had been used as housing for low-income individuals and people experiencing homelessness, into an 81-room boutique motel. Fifty-four of the rooms would be built as redesigned versions of the existing All Inn units, while 27 would be built in a new four-story building that Toerber and New Waterloo plan to construct on the property. There would also be a restaurant, pool and cafe.

The All Inn has a rich history. Julius A. Buerger Sr., a local barber and beauty-supply mogul, wrapped up construction on the Fountain Inn Motel at 3015 East Colfax Avenue in 1959. As one of the major motels along East Colfax, the Fountain Inn was able to capitalize on Americans road-tripping across the country, back in the days when Colfax was a main thoroughfare for travelers heading from the eastern United States to the western section of the country.

A major draw was the Gold Room, a restaurant where patrons could get lobster fresh from the “frozen fjords of Iceland” as well as prime Colorado beef, all while sitting next to a wall paneled in 14-karat gold. The Gold Room also offered live jazz piano performances.

But as the construction of Interstate 70 wrapped up in many parts of the West in the ’60s and ’70s, Colfax lost its importance as a major cross-country transportation artery. Crime also became an issue. The Gold Room shut down in 1969, and operators of the motel and new restaurants shuffled in and out for decades.

In 1998, Jong Min Kim, a Korean immigrant, purchased what was then the Executive Inn; he renamed it the All Inn. The Kims owned and ran the motel until they became swamped by debt, which led to the property going into foreclosure.

They were saved as motel operators in 2005, when Jesse Morreale, a Denver restaurateur and music promoter, purchased the All Inn. He kept the Kim family on to manage the motel. 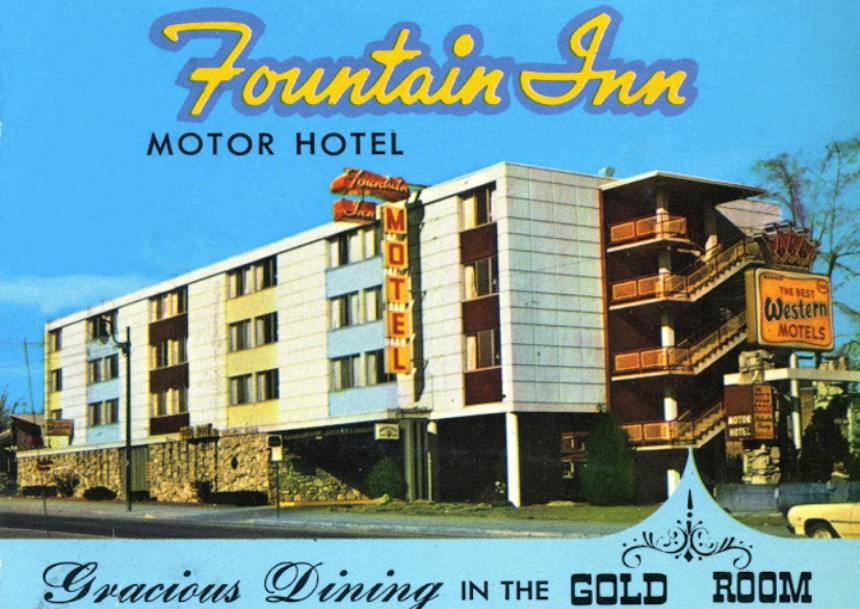 The Fountain Inn catered to tourists who were driving along Colfax Avenue as they traversed the U.S.
Courtesy of Colfax Museum
Morreale's first order of business was reopening the Gold Room as Rockbar in 2006. The venue, which was named both for the building’s facade and the band-themed booths in the bar, was an instant hit with hipsters and lovers of gritty Colfax nightlife. When the Democratic National Convention came to Denver in 2008, Morreale temporarily rebranded the place BarackBar, and hosted such celebrities as Spike Lee, Susan Sarandon and Anne Hathaway there.

But Rockbar closed in 2012, when the City of Denver denied an application to renew its liquor and cabaret licenses in the wake of neighbor complaints. 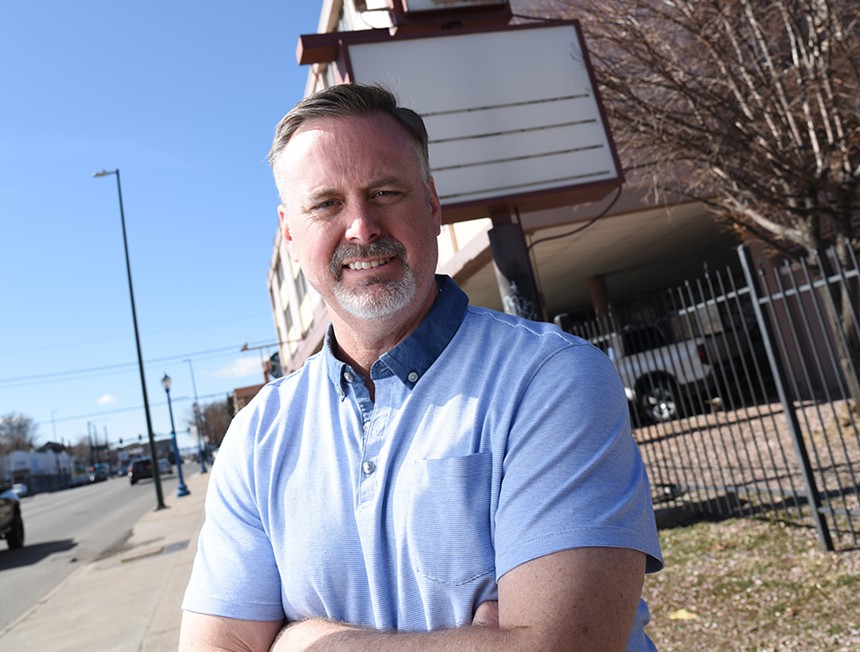 Brian Toerber first discussed his plans for the All Inn in early 2020, right before the pandemic.
Anthony Camera
In 2016, Toerber purchased the motel with the idea of building micro-unit apartments. But when he met with Albus Brooks, the councilman then representing the area, Toerber learned that nearby residents, who had continued experiencing crime and safety issues in the area after Rockbar closed, wanted to see the property become a boutique hotel.

Not long after that meeting, Toerber linked up with New Waterloo. And eventually, they began pitching that vision to lenders, all of whom balked at the idea of a boutique hotel on this section of Colfax.

Although they finally landed a lender, Toerber and New Waterloo also wanted to secure funding from DURA to make the finances of the project work. But by then, Brooks, who had been supportive, had lost in a run-off election in 2019 to Candi CdeBaca, who opposes giving any taxpayer dollars to the project.

The pandemic sidelined Toerber's efforts for a while, but he's now persuaded DURA, which helps fund projects in blighted parts of town, to support the All Inn Motel proposal. The place has strong bones and is now on the National Register of Historic Places, and it checks all the required boxes for official blight status in Colorado, according to DURA.

"This is really a heavily blighted property, both in the interior and the exterior of the building," DURA's Jeff Bader said at the May 24 committee hearing.

Toerber hasn't heard how much DURA might provide; he estimates that the overall cost of the project will be above $30 million. The team behind the All Inn project also has a lender in place, contingent on the Denver City Council vote approving the DURA funding.

But another hurdle remains. The All Inn Motel stopped accepting new guests in March. At that time, 37 people were staying at the motel, so DURA has promised to provide relocation assistance and stable housing for those individuals. So far, DURA and other city staffers have managed to secure stable housing for nine, and others are in the pipeline. But ten individuals have been non-responsive, and a handful may not have a place to go if social workers can't connect with them.

"If you’re not at 100 percent, you’re not spending enough resources talking to those residents," Councilwoman Robin Kniech said during the May 24 committee hearing.

"I think this runs counter to all of our goals," added CdeBaca, "and it will do it with public dollars, and that’s very problematic at a time like this."

While CdeBaca made it clear that she's going to vote against the project, Kniech expressed a willingness to approve it if DURA is able to find a stable situation for everyone currently staying at the motel. And that leaves Toerber with hope.

"I’m optimistic that when we follow through with this relocation, council will see that we’ve done right by those individuals that have been using this for housing, and that we care deeply about the outcomes for those individuals," he says.
KEEP WESTWORD FREE... Since we started Westword, it has been defined as the free, independent voice of Denver, and we'd like to keep it that way. With local media under siege, it's more important than ever for us to rally support behind funding our local journalism. You can help by participating in our "I Support" program, allowing us to keep offering readers access to our incisive coverage of local news, food and culture with no paywalls.
Make a one-time donation today for as little as $1.