Getty Images
Amazon has named Denver one of twenty finalists as a possible location for its second headquarters, HQ2, a facility that's expected to create 50,000 new jobs and result in a $5 billion investment for the winner. But while entrepreneur and Republican candidate for governor Victor Mitchell says he thinks HQ2 would be good for the state, unlike plenty of naysayers, he's launched an online ad campaign and petition calling on officials such as Governor John Hickenlooper not to get suckered into an expensive bidding war to secure this prize.

"I think we absolutely should attempt to bring Amazon here," Mitchell stresses. "It would be in the long-term interest of Denver and Colorado. But not one red cent of economic-development money should go to them."

Colorado officials earned criticism in some quarters for a lack of transparency in the lead-up to the state's HQ2 application, submitted prior to Amazon's October 19 RFP [Request for Proposal] deadline. The following month, some of this material was released by the economic development group representing nine metro-area counties, but significant details were redacted, including specific references to potential monetary incentives.

After the announcement about Denver making the HQ2 short list, plenty of politicians celebrated, including Mayor Michael Hancock, whose statement on the subject reads, "We are proud that Metro Denver is being increasingly recognized as one of the nation’s most innovative, progressive regions with global connectivity that is helping home-grown businesses and major industries thrive here. Our economic gains have been some of the strongest in the country, and companies of all shapes and sizes are discovering that Denver’s workforce is second-to-none. We are focused on bringing good employers with sustainable jobs for our people today and in the future, and together with our state and regional partners, we look forward to continuing to explore this opportunity with Amazon to determine if we are the right fit for each other."

Victor Mitchell, a Republican candidate for governor of Colorado.
Vic4Gov.com
Others have offered mixed messages, including Hickenlooper, who recently told a group at the City Club of Denver that if Amazon picked a city other than Denver, he would feel a sense of relief. Hickenlooper later insisted that he'd been joking, but he acknowledged that Colorado would face significant challenges if it bests competitors for HQ2.

As for Mitchell, the CEO and founder of Lead Funding, which offers private funding for the real estate investment market, he sees emptying the state's wallet to romance Amazon as both unnecessary and wrong-headed.

Big offers of cash or equivalents "don't mean anything to them," he maintains. "I think the value of the company is $620 billion. So you have the richest company, and it's owned by Jeff Bezos, who's now richer than Bill Gates. He's personally worth $100 billion. So what would it mean for Colorado to give them hundreds of millions or even billions of dollars? The value of their stock changes more each day than the value of economic incentives we could give them."

As such, Mitchell regards the bidding process for HQ2 to be "a public-relations stunt." Moreover, he believes that "Amazon already knows where it wants to go. They're likely focused on how educated the workforce is, how nimble colleges in the area will be for training employees, plus infrastructure, quality of life — things that really matter long-term to their business and their employees." 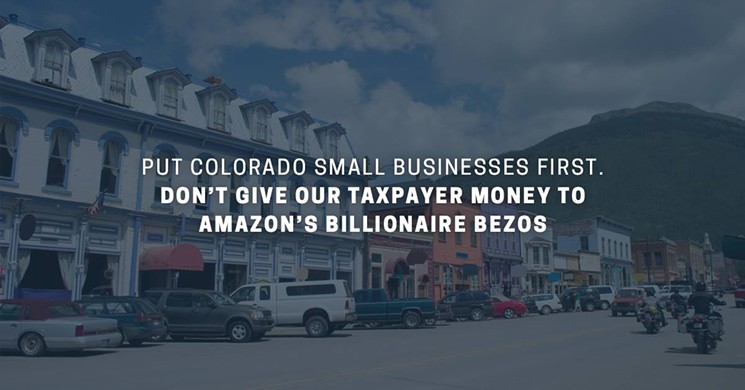 One of the images circulated by Victor Mitchell opposing a sweetheart deal for Amazon.
Facebook
Another reason Mitchell opposes a hefty Amazon payoff is because "we could use that money for small and medium-size employers, where it would really mean something to them. It would let them hire an extra ten or twenty or fifty employees or consider relocating to Pueblo or Cortez — places that are hurting and could really benefit from more private employers coming into their community. It's totally ridiculous and frankly outrageous that the taxpayers of Colorado could be giving the richest company in the world economic-development incentives when many other companies are so desperately in need of them."

If Colorado doesn't dangle a carrot in front of Bezos and company, will the state be eliminated from consideration? Mitchell scoffs at the idea.

"We have a competitive advantage over many other places in the country — places like Newark, New Jersey," says Mitchell of one of the other cities on the HQ2 finalists roster. "It's not about a few dollars of economic-development incentives. We should be focused on talking to Amazon about our high-quality workforce, access to high-quality medical care, our quality of life, our geographic location and where we're going to be five, ten, twenty years from now."

He adds, "I started a telecom company in Centennial, and do you know how much I got in economic-development incentives? Zero. I built five other companies, and how much did I get for them? The same. I didn't come here for an economic-development incentive. I came here because this is the greatest place in the world to live and work. And that's why Amazon should come here, too — not because we give them millions of dollars."

These are among the points made in Mitchell's online ad campaign. Here's one of the videos:


In addition, Mitchell's website includes a petition titled "Support Small Business, Not Bezos." Its introduction reads in part: "The state has a finite number of dollars for tax incentives, and Amazon must not be allowed to pocket all or even most of them. It would only deepen a growing urban-rural divide in Colorado, creating a system of haves and have-nots, and lead to fewer job opportunities back home for young people from rural communities."

According to Mitchell, the response to the campaign so far has been "overwhelming, to be honest with you. We've had people saying, 'You're 100 percent right, Vic.' And they've also raised other concerns."

"A lot of people have brought up affordable housing," he replies. "I think that should be addressed by dealing with the construction-defect law that's completely chilled out the building of condominiums. We have seniors who want to downsize but can't because they don't have an available option. We have to fix that, and when we do, I don't think Amazon will have that big of an impact. But people are also worried about congestion, and I understand that, because the Colorado Department of Transportation is bureaucratic and badly managed. They can't seem to fix anything. When I'm elected governor, dealing with issues around traffic and our bridges and roads will be among my administration's highest priorities."

In the meantime, Mitchell says that anyone who thinks Denver's hopes for landing HQ2 are doomed unless government types break the bank "are simply wrong. Economic incentives aren't a factor at all. But we've got a lot of incompetent politicians who don't know anything about free enterprise. The only thing they can think about is, 'If we give them more money, they'll come here.' And that's ridiculous and unfair."