Denver Cop Shot in the Neck While Transferring Suspect to Jail 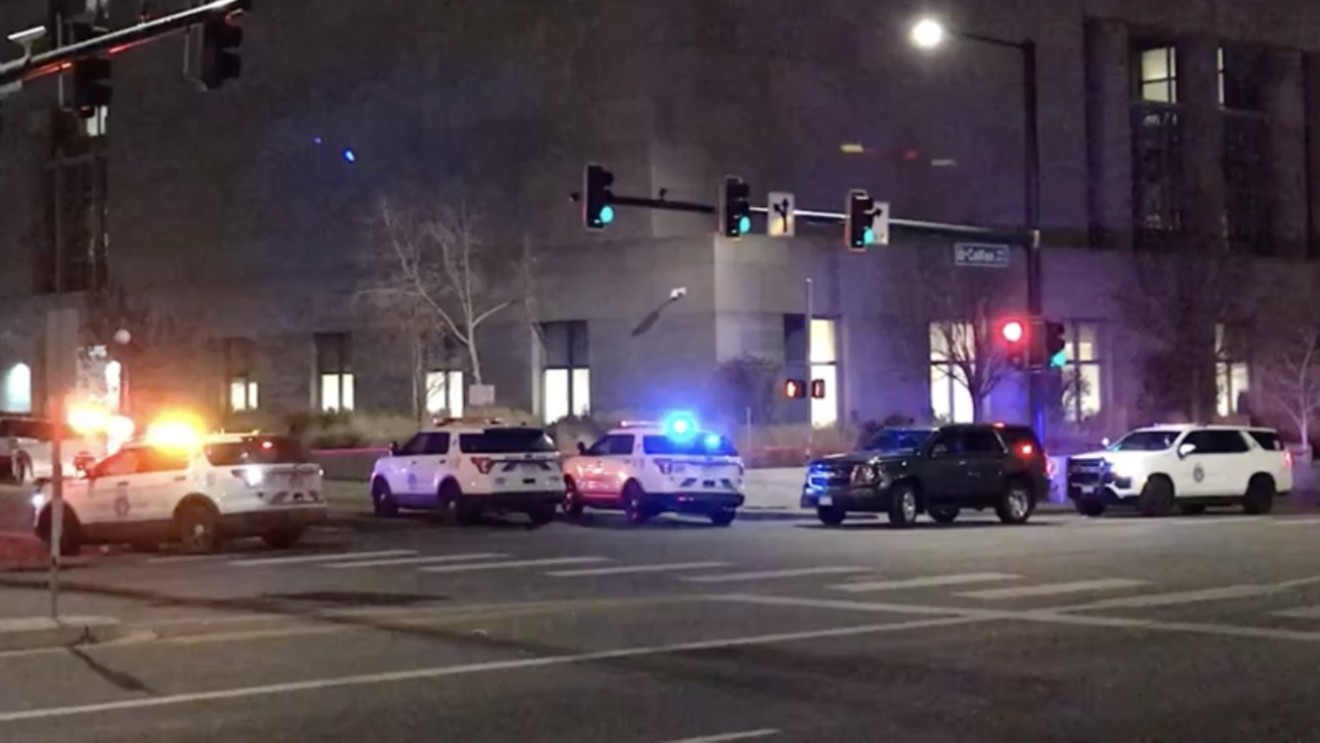 Police vehicles outside Denver's main jail after a November 28 shooting. Courtesy of Denver7
It's highly unusual for the Denver Police Department to stage a press conference at 1:30 a.m. But so was the event that brought Chief Ron Thomas to a microphone as snow fell early on the morning of November 29.

The task: to provide a briefing on an officer-involved shooting that happened around 11 p.m. on November 28 at an entry point to Denver's main jail, the Van Cise-Simonet Detention Center. According to Thomas, a suspect who'd already been searched and relieved of a weapon produced a previously undiscovered gun and shot an officer in the neck before at least one other cop opened fire on him.

Neither the suspect, who was said to be in critical condition, nor the wounded officer, suffering from what Thomas characterized as "non-life-threatening injuries," have been identified. But the incident is under investigation, and the answers to questions Thomas left open could result in significant changes to DPD procedure.

"Good morning, I suppose," Thomas began before detailing "a critical incident" that unspooled over the course of approximately two hours.

Once the car had come to a halt, the adult male suspect "walked away from that vehicle," Thomas continued, but "officers were able to detain that individual [and] confirm that the vehicle had been stolen." After the man was taken into custody, he was searched and "a handgun was recovered from him, as well as a large quantity of suspected narcotics."

The handcuffed suspect was subsequently placed in the back seat of a police cruiser and driven to the jail's sally-port area, inside the facility's parking structure. But as the officers "were removing him from the vehicle, he was somehow able to access another weapon and fire at least one round, striking one of the officers in the neck," Thomas said.

Other law enforcement officers were present in the sally-port area, and "at least one of those officers returned fire, striking the suspect multiple times."

Both the suspect and the officer were transported to Denver Health Medical Center. The officer was talking, alert and in good spirits, Thomas said, adding that his mother and wife were with him. He's been a member of the Denver Police Department for about seven years; he estimated that the other officers involved have been with the DPD about as long.

The Q&A portion of the gathering didn't provide many more details. Thomas said he didn't know exactly where the suspect had hidden his second weapon, "but we believe it was concealed somewhere else on his person." He called the presence of an additional firearm "uncommon, but not out of the realm of possibility" and stressed that "certainly, officers take precautions to search individuals for weapons and other items that could be used to harm themselves or the officers. We'll have to identify in the investigation exactly where this weapon was recovered from."

Meanwhile, the DPD's officer-involved-shooting protocol has been activated. Denver Police investigators looking into the situation will be joined by representatives from the Colorado Bureau of Investigation and the Colorado State Patrol under the Office of the Independent Monitor's oversight, and the results will be presented to the Denver District Attorney's Office for review.

"This is a good reminder that officers are out there every day doing very dangerous police work, protecting the citizens of Denver," Thomas said.

Continue to watch the press conference:


Watch: DPD provides information regarding the officer-involved shooting that occurred at the Downtown Detention Center. https://t.co/oMyB1fDANe