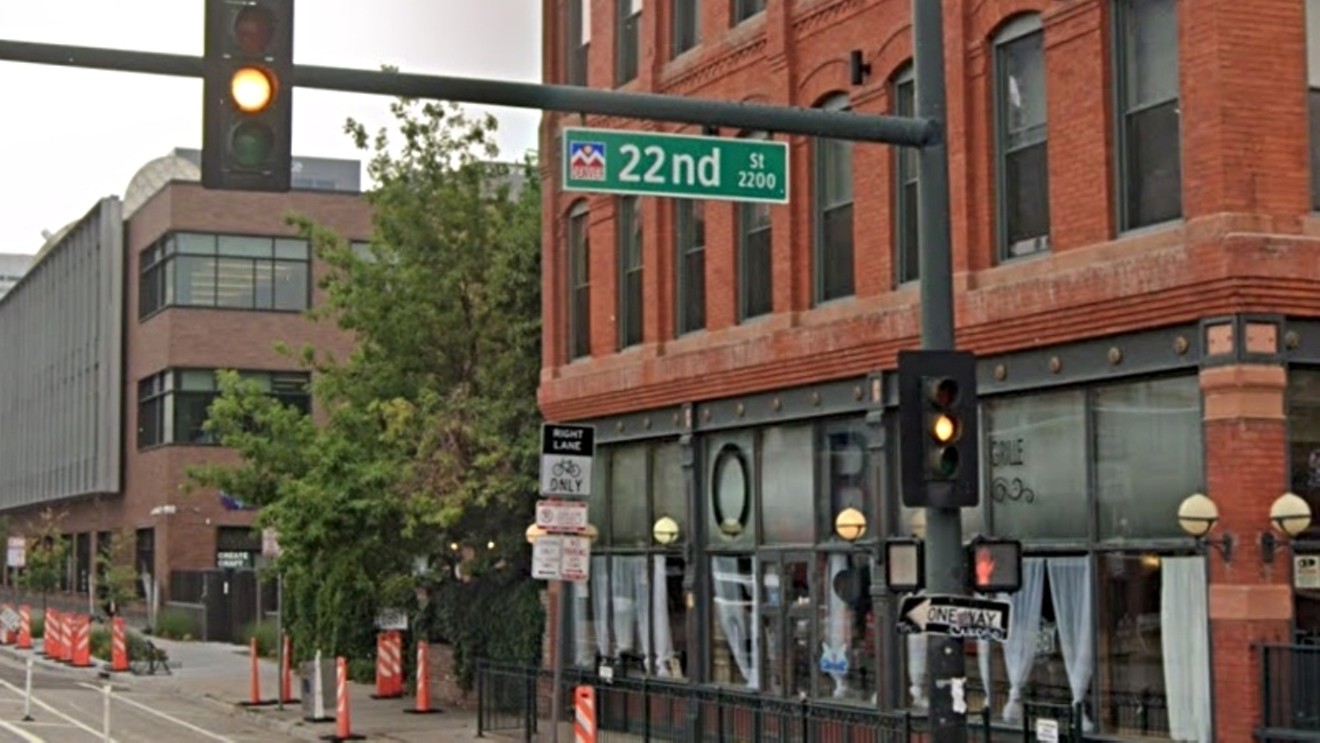 A shooting took place near the intersection of Arapahoe and 22nd Street on the afternoon of Sunday, December 4. Google Maps
Five shootings and two stabbings took place in Denver over the December 2-4 weekend. Meanwhile, violent crime continues to be concentrated in central-city neighborhoods.

The first alert about a shooting was distributed via the Twitter account maintained by the Denver Police Department at 3:16 p.m. on Friday, December 2. The location: the intersection of East Andrews Drive and North Dillon Street, near Montbello Central Park. One person was transported to an area hospital with injuries described as "unknown."

Less than four hours later, at 7:11 p.m. on December 2, the DPD reported a stabbing on the 4300 block of Danube Way, in the Gateway-Green Valley Ranch neighborhood. The wounds sustained by the victim weren't thought to be life-threatening. The same was true for a person stabbed during an attack on the 4400 block of South Quebec Street, in the Hampden South neighborhood, circa 8:08 p.m. on December 2.

A fourth violent incident Friday — a shooting on the 4400 block of Quieto Court, in the Sunnyside neighborhood — was the subject of a tweet at 8:41 p.m. No details about the single victim's injuries were publicly shared.

The area near East Hampden Avenue and South Akron Street, along the southern border of the Hampden neighborhood, was the scene of a shooting whose bulletin was time-stamped at 1:13 p.m. on Saturday, December 3. No specifics about injuries were provided, although the DPD noted that officers were working to develop suspect information.

Two more shootings happened on Sunday, December 4. As pointed out in a 1:38 p.m. tweet, the first happened on the 1100 block of 22nd Street, in the Five Points neighborhood. The victim: an adult male with unknown injuries. Then, at 7:43 p.m., Denver Police offered basic information about an adult male who sustained non-life-threatening injuries on the 8900 block of East 47th Avenue, in the Central Park neighborhood.

According to the Denver Crime Map operated by the DPD, eleven Mile High City neighborhoods had the highest rate of violent crime — defined as murder, aggravated assault and/or robbery — from November 19 to December 3, the most recent two-week period for which statistics are available. The neighborhoods in question are ranked from lowest to highest crime density — the number of violent incidents per square mile.

CBD
Offense Count: 8
Crime Density: 18.56 per square mile
KEEP WESTWORD FREE... Since we started Westword, it has been defined as the free, independent voice of Denver, and we'd like to keep it that way. With local media under siege, it's more important than ever for us to rally support behind funding our local journalism. You can help by participating in our "I Support" program, allowing us to keep offering readers access to our incisive coverage of local news, food and culture with no paywalls.
Make a one-time donation today for as little as $1.