Dogs: experts in "most active" being a double-edged sword. Wedstock 2011 at Flickr
Denver has once again rated at the top of a dog-related ranking, this time with Mile High dog owners declared “most active” in a Rover.com survey. Fur-baby parents from ten American cities were surveyed about their habits, beliefs and practices in categories that included indulgent, eco-friendly and obsessive. It’s notable that Denver came in dead last in that last category, and given that most of us know someone who’s seriously obsessed with their canine pal, that might be cause for a second look at the data set, the scientific method employed, and how many Denverites might have just plain lied on their survey forms in a rare show of pet-related shame.

Still, Denver winning “most active” makes a lot of sense, as the well-worn park trails of Denver will attest. It’s tough to go for a walk in the city without running into at least a handful of dogs and their people. So it also makes sense that Rover.com’s list was perhaps incomplete.

Here’s a list of categories it might want to consider for the next round — and why Denver’s dog owners will be strong contenders for every one of these dubious titles:

Worst Excuses for Having a Dog Off-Leash
Examples that you’ll commonly hear as a strange dog barrels toward you, teeth bared: “Don’t worry, he’s friendly!” or “It’s a park; it’s for everybody!” or “I have his leash right here!” or “I desperately want a reason to appear on Judge Judy.”

Most Bandannas
Bandannas are so ubiquitous in Denver, they adorn even breeds with no apparent neck. On a Bernese Mountain Dog, a bandana can serve as a neckerchief, or maybe an ascot. On a pug, it’s something else entirely. Maybe a skirt? It’s like tying a bow on a watermelon. 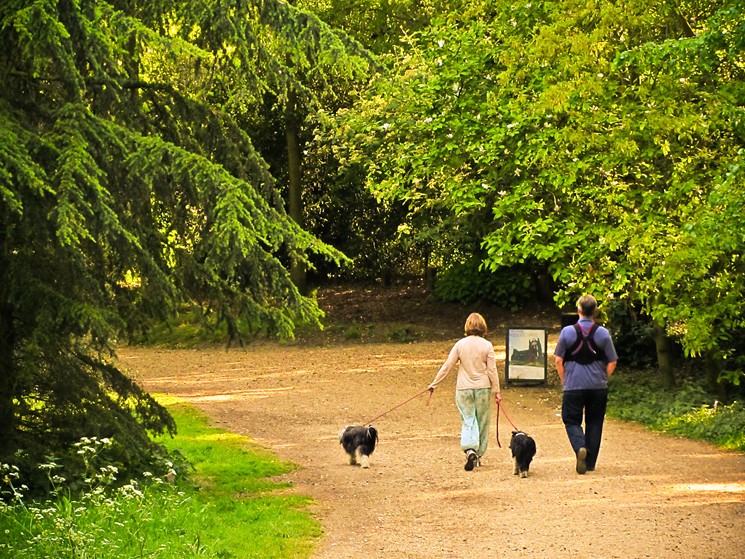 Hey, I'm walkin' here!
Garry Knight at Flickr
Least Likely to Make Room on the Walking Path
Who has to move over for whom? Do dogs have right-of-way across the whole path? Does it make a difference if you’re running with the dog, or just casually strolling? And what happens when a dog owner who doesn’t want to clear the way runs into a jogging stroller-mom who also believes that she has the right to not have her straight-line path disturbed? This is Denver’s version of the irresistible force meeting the immovable object. Imagine the sheer potential outrage that confrontation would generate: It could blow Cherry Creek right off the map.

Most Often Maskless
This is a new category just for 2020 — and maybe the next couple of years, as the American disaster of COVID denial and governmental malfeasance rolls on. In Colorado, it’s recommended that you wear masks even outdoors, but dog-walkers in Denver seem to think they’re exempt from this policy. Of course, that just puts them on the same list as too many joggers, bikers, science-deniers and assorted future victims who think that the rules of the pandemic are somehow negotiable.

Finest Dog Cuisine
The new fad in feeding your dogs better than your own children is human-grade dog food that requires refrigeration. Denver pet owners have taken to this idea with relish. (Not with actual relish, because dogs prefer whole pickle spears, thank you.) There was a time not long ago when dogs ate essentially the animal parts that Americans wouldn’t, bound together with some grain meal and various preservatives. Then we formed it into kibble, or if you wanted to be real fancy, made it look like raw hamburger patties. But now, dogs are eating high on the hog: concoctions of meats and veggies that in a slightly altered form any college student would enjoy.  Today, does human-grade dog food differ from a good ol’ can of Dinty Moore Beef Stew, which doesn’t even need refrigeration? The answer, as with all fondly remembered canned food from our childhoods: better not to ask.

Phil Collins (left) and Theodore (right): staunchly pro-lap.
Stephanie March
Fewest Laps per Canine Capita
It’s sort of the downside of being crowned “most active." Too many dog owners in Denver are up and off the couch and on the go, doing their hiking and their power walking and their backpacking and whatnot. And when you’re not on the couch, you’re not providing a lap upon which dogs can lie. This is a big issue in the canine media, right next to heartworm and “Should I eat this thing on the ground right now?” Come on, Denver: Make Laps Available Again.
KEEP WESTWORD FREE... Since we started Westword, it has been defined as the free, independent voice of Denver, and we'd like to keep it that way. With local media under siege, it's more important than ever for us to rally support behind funding our local journalism. You can help by participating in our "I Support" program, allowing us to keep offering readers access to our incisive coverage of local news, food and culture with no paywalls.
Make a one-time donation today for as little as $1.