Earlier this year, however, "Eternal Youth" proved its mortality by toppling from its perch during a storm, and with a single exception, it's been out of view for months. But Cari Ervin, community life manager for the Windsor Gardens Association, says some residents are hoping that the statue — which pre-dates divisive public artworks such as Denver International Airport's Blucifer and the Colorado Convention Center's Big Blue Bear — will stage a comeback and continue a history marked by controversy that went beyond inspiring grown-up thoughts among Mile High City pre-teens. An illustration of the tower and its appearance in a 1968 edition of Time magazine.
Courtesy of Windsor Gardens
In 1962, Ervin recounts, "Denver artist Alford Terry presented a winning design for a sculpture contest initiated by developers Howard Farkas and Werner Livingston for the Windsor Gardens Association. Terry’s 'Eternal Youth' alabaster statue was commissioned to preside over the main entrance of Windsor Gardens at Alameda Avenue. Standing twelve-feet tall, the statue was dedicated in June 1963 to mark the community’s one-year anniversary." Among the dignitaries who attended the event was actor Franchot Tone, who earned a Best Actor nomination for the 1935 version of Mutiny on the Bounty and starred in one of the craziest, most enjoyable film noirs of the 1940s, director Robert Siodmak's Phantom Lady.

Fans of the statue began referring to the pair as "Dick and Liz," a reference to the then-current romance of actors Richard Burton and Elizabeth Taylor. But not everyone was thrilled with Terry's offering. "Before the statue's official dedication, a petition began circulating debating the 'artistic and moral merits' of the nude figures," Ervin acknowledges. "Governor Ed Johnson publicly denounced the statue, and the controversy attracted national media attention, which inadvertently assisted in the growing interest and success of Windsor Gardens."

There was another issue, too. Ervin reveals that "the statue was installed on a six-foot turntable, 35 feet above the ground. Three times daily — 9 a.m., noon and 5 p.m. — a curtain was lifted and 'Some Enchanted Evening,' 'Younger Than Springtime' and a cycle of other melodies played as the embracing couple slowly revolved." But nearby residents complained about the noise, causing the statue to be "covered for nearly a decade, until it was unveiled again in 1975." Ervin assumes that the music never played again, but she's unable to confirm that. 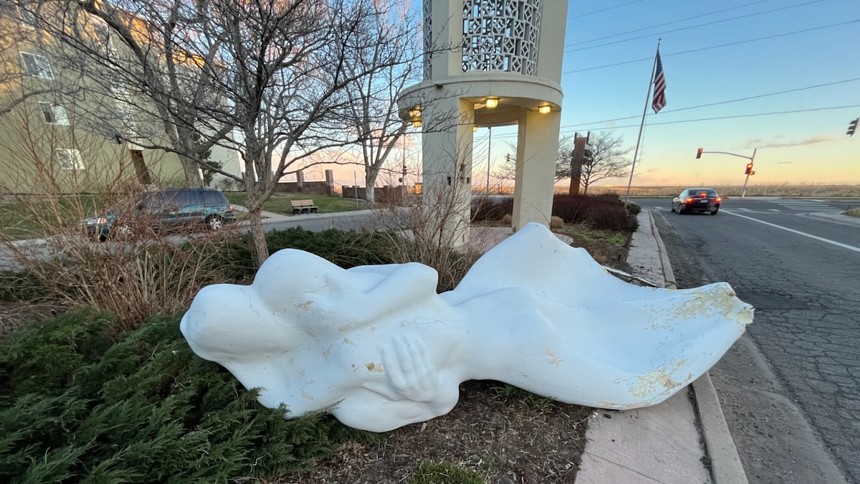 The fallen statue after the April windstorm.
Photo by Jane Doyle courtesy of Windsor Gardens
In the years that followed, "Eternal Youth" stood tall, if silent. But around 8 p.m. on April 5 of this year, the statue fell from its tower during what the Windsor Gardens Association's social media announcement characterized as "a significant windstorm." The sculpture was found "in one piece, despite some visible damage," the post added.

On June 25, the couple made an appearance at Windsor Gardens' sixtieth-anniversary festival, with a little help from a forklift.. "The association will soon embark on structural repairs to the tower and evaluate the future placement of the 'Eternal Youth' statue," says Ervin.

Much to the delight of Denver's eleven-year-olds — and plenty of other folks, too.
KEEP WESTWORD FREE... Since we started Westword, it has been defined as the free, independent voice of Denver, and we'd like to keep it that way. With local media under siege, it's more important than ever for us to rally support behind funding our local journalism. You can help by participating in our "I Support" program, allowing us to keep offering readers access to our incisive coverage of local news, food and culture with no paywalls.
Make a one-time donation today for as little as $1.