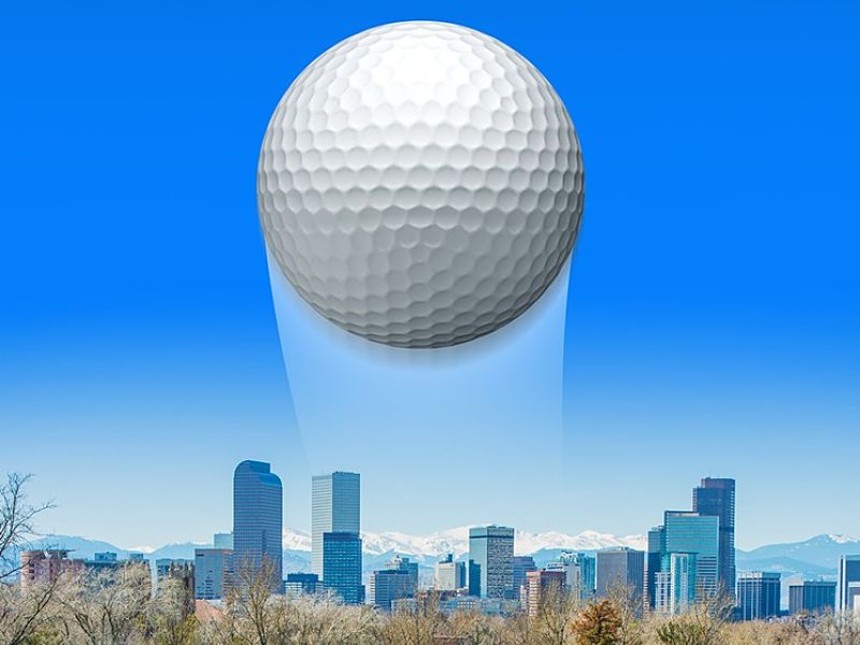 The auditor gave Denver Golf a good whack.
Getty Images/Westword
A new report from Denver Auditor Tim O'Brien tees off on Denver Golf, criticizing the city agency that oversees Denver's municipal golf courses for not having a strategic plan — and not wanting one.

O'Brien's team released the audit report on September 21. In his response to the audit, Denver Golf director Scott Rethlake said that he agreed with many of the recommendations, including those related to minor aesthetic improvements to golf courses and facilities, safety issues, and better integrating a credit- card system so that no-shows can be charged for having reserved a tee time.

However, Rethlake disagreed with the auditor's recommendations related to strategic planning.


"Due to Denver Golf being a service-based demand responsive organization, our goals of providing the best value, customer service, being stewards of the environment, good members of the community and inclusivity don’t change. We keep up with industry best practices. We use the Parks and Recreation Department-wide Game Plan for a Healthy City as our guidance," Rethlake wrote in response to the auditor's findings.

Denver Golf, which operates as an enterprise fund sustained by revenues derived from its golf operations, is largely independent from the city's general fund, even though it is part of Denver Parks & Recreation. It has seven golf facilities in Denver and a golf course in Evergreen; it had budgeted $13.9 million for expenditures in 2021.

Denver Golf released a strategic plan in 2011, but that plan expired in 2019.

"Not only does Denver Golf not have a strategic plan, management said they did not think developing one was a worthwhile investment," the auditor's office notes in a statement attached to the report. "Management said they prefer a more fluid approach and that documentation is mostly an unnecessary hindrance. The director said goals with attached timelines are neither necessary nor helpful."

The Denver Auditor, an elected position, can audit aspects of city government, issue reports, seek compliance with the recommendations, and then follow up to determine whether compliance actually occurred. But the auditor's office does not have the authority to set policy or actually require a city agency to take any action.

"The director of Parks and Recreation, Happy Haynes, could say, 'Well, on further thought, we could do this,'" O'Brien notes. Instead, she cited the cost and time that would be required to craft a strategic plan for Denver Golf, and "was pretty dug in that she wasn’t going to do this," he adds.

"I don’t think that it’s that costly or time-consuming, and I think it’s worth it in the long run," O'Brien says, noting how challenging it could be if Rethlake leaves his post and someone new comes in. "If you’re new coming in as the director of any organization and there are no plans in place, you’re really at a deficit," he explains.

Rethlake is out of town and was not available to comment further on the report. Haynes has not yet responded to a request for comment.

Aside from O'Brien's major concern over the lack of a strategic plan, he also highlighted a possible safety hazard at his favorite Denver municipal course, Wellshire. (His second favorite is Willis Case.)

"I think the golf courses are a true asset to the City and County of Denver, and some of the aesthetic or safety issues should be addressed," he says. "I regularly play golf on the city courses. I appreciate the courses. But at one of the holes over at Wellshire, one of the tallest trees on the course is dead, and it’s been dead for a couple of years. And I think that’s a safety hazard."
KEEP WESTWORD FREE... Since we started Westword, it has been defined as the free, independent voice of Denver, and we'd like to keep it that way. With local media under siege, it's more important than ever for us to rally support behind funding our local journalism. You can help by participating in our "I Support" program, allowing us to keep offering readers access to our incisive coverage of local news, food and culture with no paywalls.
Make a one-time donation today for as little as $1.