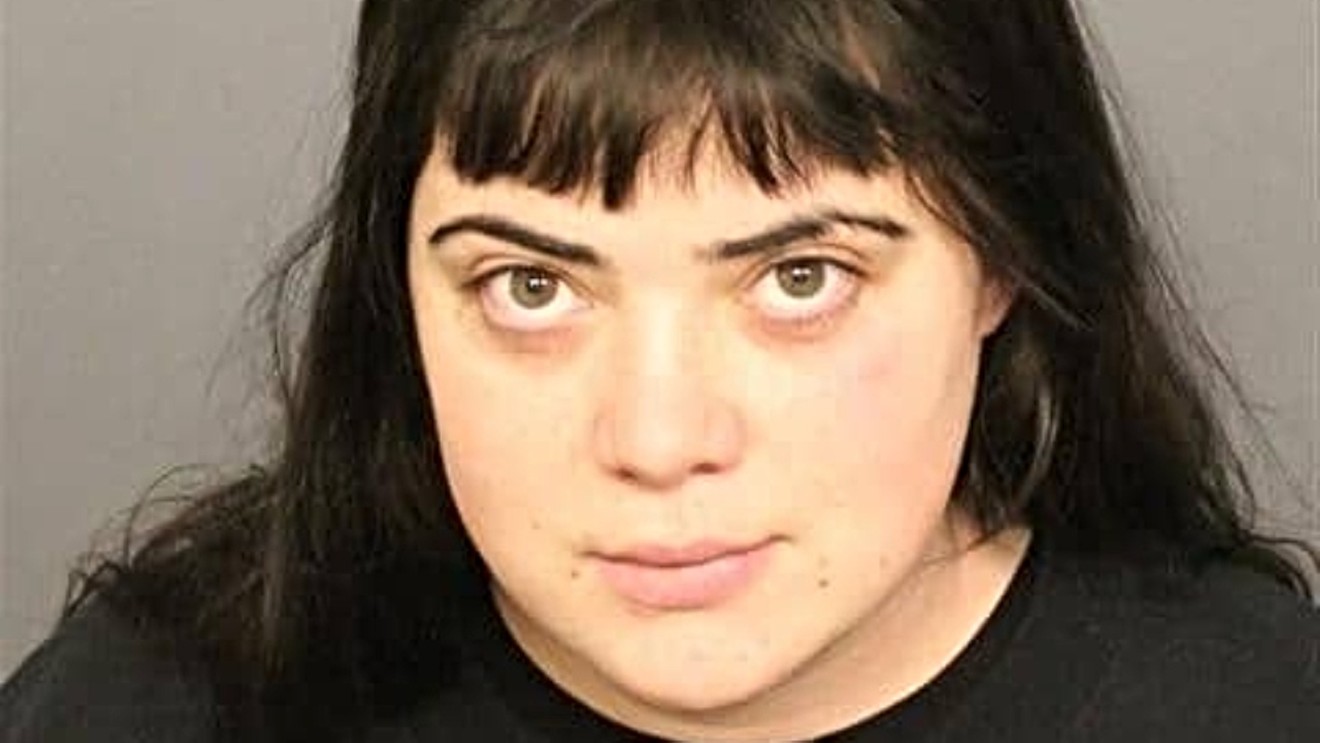 A booking photo of Madeline Cramer. Denver District Attorney's office
On January 13, the Denver District Attorney's Office announced hate-crime charges against 26-year-old Madeline Cramer over her alleged graffiti attack on the building and grounds of the Cathedral Basilica of Immaculate Conception, the Mile High City's most iconic Catholic church. Among the phrases prosecutors believe she sprayed: "Child rapist faggots," "Suck my dick" and "Satan Lives Here."

Hate crimes and bias-motivated offenses like this one are all too common. The U.S. Justice Department counted 283 hate crimes statewide in 2020, the most recent year for which statistics are available, and information from the Denver Police Department lists nearly 500 busts for such offenses from 2010 until early 2020.

The timeline from the arrest warrant for Cramer begins at 7:40 a.m. on October 10, 2021, when a suspect later identified as Cramer parked a vehicle in front of 406 East Colfax Avenue, then walked across the street to the Basilica. She then used red spray paint to emblazon phrases and slogans on the building and nearby statues. Here's the list of messages compiled by the DA's office:

According to the affidavit, a church-goer confronted Cramer, who was wearing a black-brimmed hat, a black shirt, black skirt and black shoes; she fled the scene. But HALO video captured her license plate, which was traced to her home address. A subsequent search of Cramer's car appears to have yielded "evidentiary items," but the specifics are blotted out in the public version of the warrant. Total damage to the Basilica is estimated at $10,000.

Cramer was initially arrested on an outstanding felony warrant from Fremont County, the warrant states, but "due to COVID-19," that jurisdiction denied extradition. She subsequently split for Oregon, but turned herself in to local law enforcement on the evening of January 12. She's been charged with one count of criminal mischief, a felony, and committing a bias-motivated crime, a misdemeanor.

The Justice Department's page about hate crimes in Colorado shows that the number of such offenses more than doubled during the two-year period between 2018 and 2020, going from 123 to 283. Around 65 percent of the 2020 crimes are linked to race, ethnicity or ancestry, with bias involving religion accounting for 12.4 percent of the total. Here's a graphic comparing crimes over that three-year period:

The Denver DA's office has not responded to Westword's request for information about hate-crime prosecutions in the Mile High City. However, the agency touted the April 2019 sentencing of Ryan Austin Lee, 43, on two counts of bias-motivated crimes, and two more for assaults in the third degree, over a 2017 incident during which he is said to have threatened and chased a mixed-race family around southwest Denver's Garfield Park with a hammer. He received a five-year sentence.

Other bias-motivated crime prosecutions have taken place more quietly. Denver's open-data catalogue pertaining to hate crimes lists 495 arrests from January 7, 2010, to January 4, 2020. During 2019, the most recent full year for which stats are available, the roster lists 86 incidents, of which 26 are said to have been "accepted by DA." The crimes vary widely and include assault, harassment, burglary, criminal mischief and more.

Cramer's next court appearance is scheduled for February 14. Click to read the Madeline Cramer arrest warrant.
KEEP WESTWORD FREE... Since we started Westword, it has been defined as the free, independent voice of Denver, and we'd like to keep it that way. With local media under siege, it's more important than ever for us to rally support behind funding our local journalism. You can help by participating in our "I Support" program, allowing us to keep offering readers access to our incisive coverage of local news, food and culture with no paywalls.
Make a one-time donation today for as little as $1.