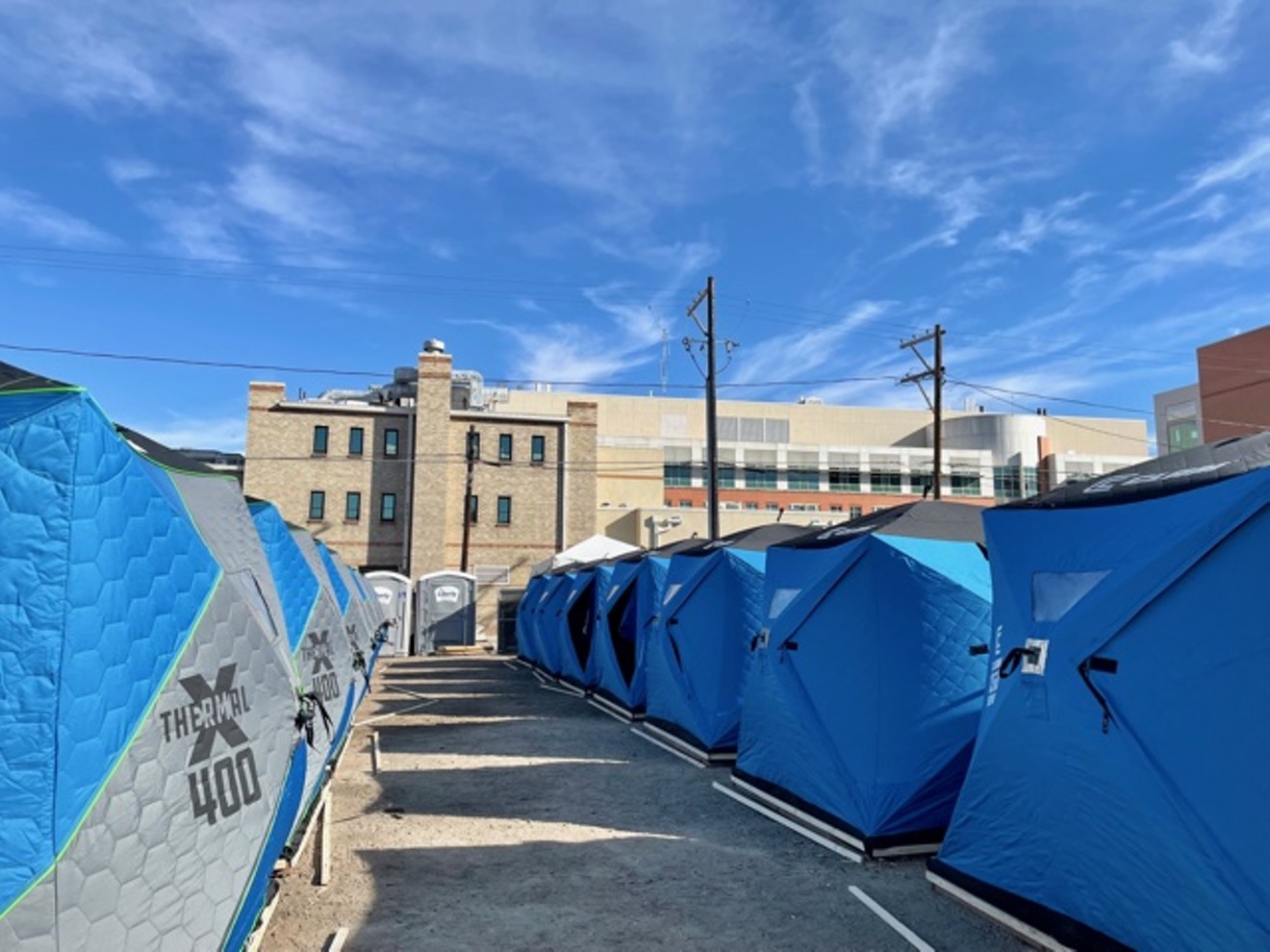 A safe-camping site in Lincoln Park is moving to Montbello. Courtesy of Jennifer Forker
A safe-camping site in the Lincoln Park neighborhood will be moving out by year's end. "We are so grateful to the leadership and support of Denver Health for opening its campus to our work and supporting us as we served so many people,” says Shay-La Romney, the interim CEO of the Colorado Village Collaborative.

Since last November, the safe-camping site, which provides individual tents, on-site bathrooms and connections to services for people experiencing homelessness, has been located on a dirt parking lot at 780 Elati Street owned by Denver Health. Unlike Denver's two other current safe-camping sites, this one catered to Native American individuals.

The CVC had a one-year lease for the lot with Denver Health, crafted to allow for two six-month renewals; they've negotiated an extension until December to make the move smooth.

The location was never ideal, as the site was located just feet away from a nearby home, whose owners protested its arrival.

"It was also building a site on dirt, which is really rough on our community members. While we attempted to work with the mud during rain and snow, the efforts we attempted still resulted in muddy tents. We didn't realize the level of impact that the dust would have during really dry times, either," says Jennifer Forker, the CVC's development and communications director.

The CVC has negotiated a lease with the City of Denver for a new site in a section of the parking lot at 4685 Peoria Street, which is home to the Arie P. Taylor Municipal Center, which comprises a Denver police district headquarters, a DMV branch and a section of Denver Human Services. Denver City Council will still need to approve the agreement, which is for a year with the option for two six-month renewals.

The new site will be a continuation of the Lincoln Park location, which has served 95 people to date, including 53 Native Americans. At least 24 of those 95 individuals have moved into longer-term housing, according to the CVC.

The CVC has been running safe-camping sites in the city since December 2020, just a few months after Mayor Michael Hancock gave his approval for the program, citing it as an alternative to unsanctioned camping on the streets of Denver. Although the Hancock administration was initially opposed to the safe-camping-site model, it has since bought into it completely, with the city budgeting $4 million this year for the program.

But while the city supports the concept, some neighbors do not. They've filed administrative appeals and even sued to block certain sites from staying in operation.

The CVC established the Lincoln Park site just a few months after the Hancock administration swept an encampment that was located outside the nearby Four Winds American Indian Council community center.

In the run-up to that sweep, encampment residents and Four Winds leadership met with Hancock virtually to ask the city to cancel the sweep and provide a "Native-preference" outdoor space for those staying in the encampment, which had developed a reputation as a safe place for Indigenous individuals. Native Americans are significantly overrepresented in metro Denver's homeless population.

While the Colorado Village Collaborative, which has been around for five years, has spent much of its time moving tiny-home villages and safe-camping sites to new parts of town, the organization has decided that it's ready to settle at a permanent location. After proposing that idea at a strategy document, the longtime head of the CVC, Cole Chandler, announced that he'd be leaving the organization for a newly created job as director of homelessness initiatives at the Colorado Department of Human Services.

"I leave my role with hope. I leave with gratitude. I leave in celebration of the strong foundation that we have built together," Chandler wrote in his August 12 farewell letter. "I can't wait to see the life that this organization continues to bring to so many across the City of Denver and beyond."
KEEP WESTWORD FREE... Since we started Westword, it has been defined as the free, independent voice of Denver, and we'd like to keep it that way. With local media under siege, it's more important than ever for us to rally support behind funding our local journalism. You can help by participating in our "I Support" program, allowing us to keep offering readers access to our incisive coverage of local news, food and culture with no paywalls.
Make a one-time donation today for as little as $1.