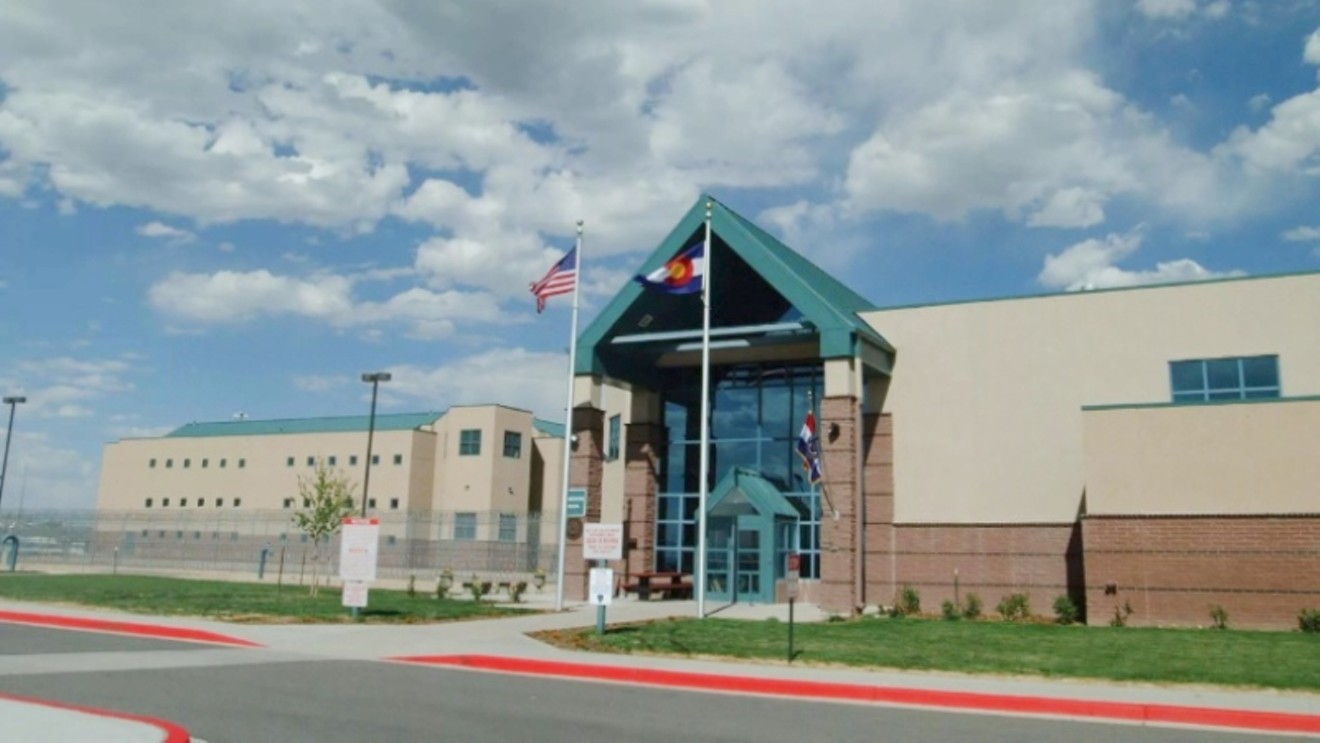 The incidents took place at the Denver Women's Correctional Facility. Colorado Department of Corrections
The events at the center of a lawsuit filed by former inmate Susan Ullery against various Colorado Department of Corrections representatives are flat-out bizarre. Indeed, the actions of Bruce Bradley, a former CDOC captain with an overwhelming foot fetish, would seem unbelievable if not for the fact that they just cost the state $300,000.

Attorney David Lane of Denver-based Killmer, Lane & Newman LLP, who represented Ullery in the complaint along with Eytan Nielsen LLC's Iris Eytan, shares the strange story, whose roots stretch back to 2014, when Ullery was an inmate at the Denver Women's Correctional Facility, a CDOC institution at 3600 Havana Street.

"Susie was working on the loading dock at the facility, loading and unloading trucks for the canteen, and Bradley was her superior officer — her boss," Lane begins. "He had a couple of sergeants working underneath him, and he's got a foot fetish, which he admitted in a deposition. These female inmates, after a hard day, took off their boots and were rubbing their feet, and he came over for a 'pedi-inspection.' He would ask, 'Do you wear toenail polish?' and all of these foot-fetish questions."

The inmates "were creeped out," he continues, "but after that, he would make them take off their boots and show their feet. And with Susie, he would talk endlessly about sex and what she liked, and when she walked past, he would grind his pelvis into her butt and grope her."

Ullery didn't simply shrug off this abusive behavior. "She would complain to the sergeants, who were her bosses but below Captain Bradley," Lane says. "And they would laugh and say, 'He just likes you. Keep the old man happy and your life will be much easier.' They would do nothing about it, despite numerous women complaining about him." According to the lawsuit, witnesses had observed Bradley harassing female inmates since at least 2008.

Nothing was done to stop the captain's bad behavior until the spring of 2016 — and the tactic employed put Ullery at risk.

"One day, Susie was working on the dock, and she got a call to report to a particular office, which was very unusual," Lane maintains. "She goes there, opens the door, and inside there's the warden, the deputy warden, people from the attorney general's office, some brass from DOC. They say, 'We know Bradley is a pig and he's been sexually harassing women for years. We've just never been able to prove it. We want you to wear a wire and get the evidence for us.'"

Ullery initially rejected the offer. "She'd already been approved for parole in ninety days, and she was afraid this would make her vulnerable to DOC staff," Lane recounts. "She didn't want retaliation to result in her parole being denied. But after she said no, they started pressuring her, and she got nervous that they were going to mess with her parole. So she finally said, 'I'll do it,' and they assured her that there weren't going to be any problems. If anything happened, they promised they would race in and take care of her."

The plan made Ullery nervous "because if other inmates saw she was wearing a wire, she would immediately be in physical danger from them, because only snitches wear wires," Lane says. "But the staff got her through the security — they made sure the wire didn't set off metal detectors — and she went to work. Then Bradley called her into his office upstairs and started talking to her about the usual stuff: her feet, her breasts.

"She told him, 'There's something wrong with you,'" Lane continues. "That made him angry. He came around the desk and grabbed her in the crotch, grabbed her breasts. As she was struggling, she thought, 'Where the hell are my protectors?' They were nowhere to be seen. But finally, after about five minutes of that, somebody finally came in and Bradley backed off. Susie ran out, told them what happened, and Bradley was taken away — escorted out of the office. He wasn't seen in the prison again."

Not that he faced any criminal charges for his behavior. "What ended up happening was that he admitted it, but they allowed him to resign," Lane says. "He should have been fired and prosecuted, but instead they said, 'You can resign,' and he got sort of an honorable discharge."

The situation faced by Ullery was considerably worse, Lane notes: "Rumors were going all over the DOC that she was a snitch — that she snitched on Bradley, she was wearing a wire. And she started getting death threats from other inmates, since it doesn't matter who you snitch on — a correctional officer who is sexually assaulting you or another inmate. You're still a snitch."

Ullery was paroled about three months later, and in July 2018, she filed a civil-rights lawsuit, which described her as "the victim of a system that not only looked the other way as Defendant Bruce Bradley treated inmates as objects of his own sexual gratification, but actually set Ms. Ullery up to be sexually assaulted by a man with a known history of sexual misconduct."

As Lane summarizes the next four years of legal wrangling, the State of Colorado "filed a motion to dismiss that was denied, so they took the case up to the 10th Circuit. We won in the 10th Circuit, which sent it back for trial. After that, they said, 'Okay, we give up,' and $300,000 later, we're done with the case."

As Lane sees it, "There are plenty of honorable DOC employees. But it's always a corrupt system when the cops are investigating cops. And that's what happened here, even though there was an admission of a sexual assault. Bradley should have been prosecuted, but he didn't even get fired — and he didn't lose a paycheck. I call that corruption."

The Colorado Department of Corrections issued the following statement about the settlement: "Ms. Ullery reported staff misconduct several years ago, which the department took very seriously and which was investigated by our Inspector General’s office. The staff member involved, Mr. Bradley, is no longer employed by the Department. Ms. Ullery filed a lawsuit and alleged additional complaints that she had not reported during the investigation, including claims the department disputed. The department has no further comment on the litigation that resulted from this matter."

Click to read Susan Ullery v. Rick Raemisch, et al. (Raemisch is the former CDOC executive director), and the settlement agreement, which was signed on July 29 and made public yesterday, August 16.
KEEP WESTWORD FREE... Since we started Westword, it has been defined as the free, independent voice of Denver, and we'd like to keep it that way. With local media under siege, it's more important than ever for us to rally support behind funding our local journalism. You can help by participating in our "I Support" program, allowing us to keep offering readers access to our incisive coverage of local news, food and culture with no paywalls.
Make a one-time donation today for as little as $1.