The Grand Sued by Tenants It Kicked Out Last Summer 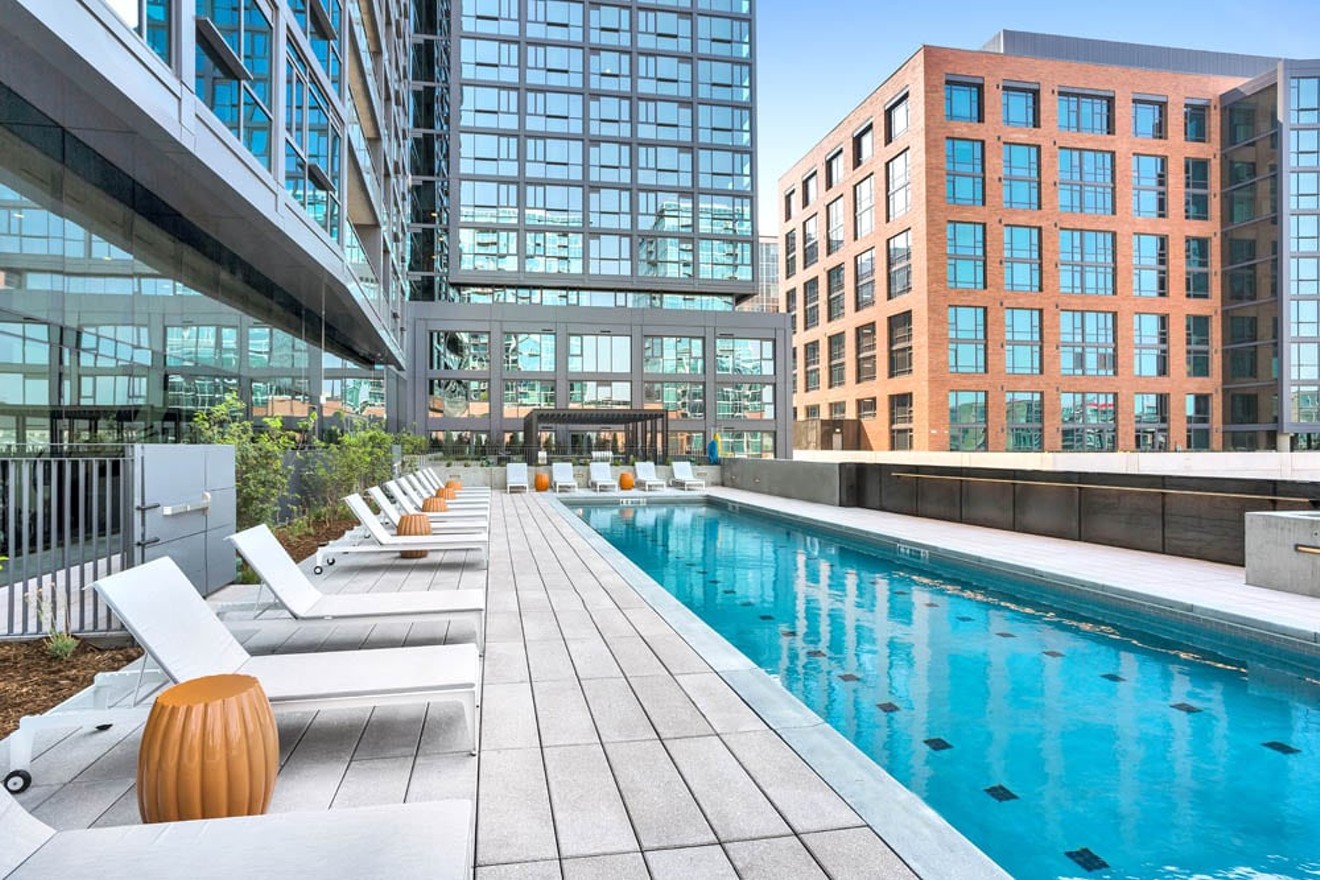 Life wasn't so grand at The Grand. thegranddenver.com
On July 6, The Grand, a 508-unit luxury apartment complex behind Union Station, ordered all of its tenants to move out within thirty days so that it could make long-pending repairs. Now it’s facing a lawsuit from eleven named tenants for breaking lease contracts, engaging in deceptive practices and breaching the Colorado Warrant of Habitability.

Ian Hicks is representing the plaintiffs. An attorney who mainly focuses on consumer protection law, Hicks knew a few people who lived at the Grand and had even considered living there himself. So this case hit home.

In December 2021, Westword reported on lousy conditions at the complex at 1701 and 1777 Chestnut Place, which had just opened in 2018. That summer, the property had flooded, causing a power outage during a record heat wave; problems from the flood persisted for months. The pool was often closed because of unsanitary conditions, despite it being presented as one of the amenities that helped justify the high rents — $1,500 for a studio up to $8,000 for a penthouse.

Last fall, the Denver Fire Department had cited the property for a series of violations, including accessibility violations, fire doors in need of repair, no current conveyance certificate of operation for the elevators, and an outdated generator, boiler and swimming pool permit. In a follow-up inspection in December, the fire department noted a compromised fire suppression system, resulting in an order that the Grand obtain a master suppression construction permit and submit a structural design in order to avoid further fire code violations. The Department of Community Planning and Development received the design proposal permit on December 20.

But six months later, the work wasn't complete. And then the Grand served all of its tenants with a thirty-day notice to vacate.

"What is better than living in an outrageously expensive building that seems almost possessed, to hate its occupants?” asks the lawsuit filed in Denver District Court. “Being defrauded into signing a lease. Then — because why not? — being lied to during your tenancy. Into this milieu, add the indignity of being shuttled, from one unit to another, because moving during a Covid-19 pandemic is convenient. The worst came last: Plaintiffs were unceremoniously dumped into the wilderness of an overpopulated city, with limited housing options, in the throes of a housing crisis and historic inflation, through a contrived ‘eviction.’”

According to Hicks, the plaintiffs are aiming for class certification so that more of the tenants can join. However, the lease they'd initially signed contained a class-action waiver, so the first order of business is showing why that waiver should be voided.

“There's a strong argument that Colorado public policy is against that...residents and tenants waiving any sort of rights that they might otherwise have,” Hicks says. “There's no statute saying that, per se. There are other statutes, however, that say you can't waive the Warranty of Habitability. You can't waive a jury trial, things like that. I think there's a pretty clear intent there.”

The lawsuit specifically names Chestnut Place, the owner of the property and an entity of Shorenstein Properties LLC created for the purpose of developing luxury real estate assets in Denver. It also names Greystar, one of the country’s largest property management companies, which ran the building; Gina Vilar, who is a Greystar property manager; and Anna Jensen, a Greystar operations manager.

“For all their experience and knowledge, Defendants are factually and legally responsible for turning The Grand to the Not So Grand: When your penthouse lives like an outhouse, and each day brings some new and different violation of the law, indignity visited upon the tenants, or cosmic absurdity that turns home into a basket of bad surprises,” the complaint says. 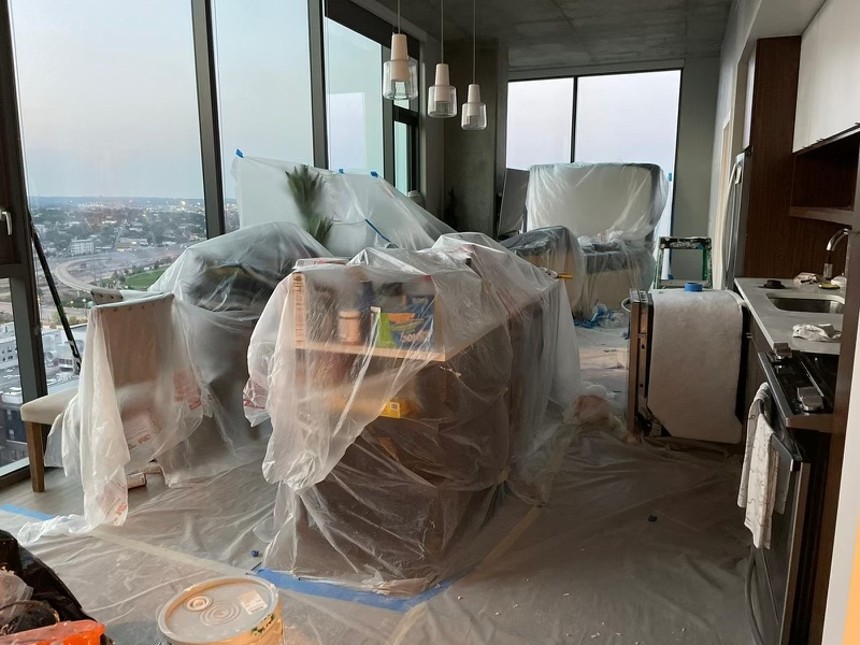 Residents at the Grand, 1777 Chestnut Place, lived through floods, power outages and then being abruptly booted out of their homes.
Special to Westword
The companies knew there were issues before any of the plaintiffs moved in. All of them signed leases that started after December 2020; that November, Chestnut Place had acquired a construction permit from the city for drywall repair and replacement on three floors of the south tower.

Because the company apparently knew of many of these problems before the plaintiffs signed leases, the lawsuit argues that it deceived them.

“There were a couple of my clients who saw fans in the hall and stuff when they were looking at it at first,” Hicks says. “They'd ask about it, and [the employee would] say, ‘Oh, yeah, we've never had any flooding or any conflict.’ Just straight up lying about it.”

In the construction company litigation, Chestnut Place claims that Saunders Construction is responsible for the glass balconies that would randomly break; last year, tenants who lived in balcony units suddenly found that their door handles had been removed, in order to prevent them from going outside on the unsafe balconies, according to the Hicks filing. 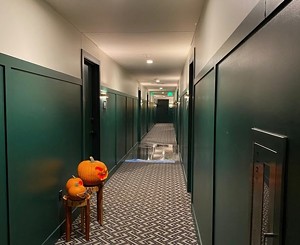 This hallway at the Grand flooded.
Instagram @notsogranddenver
In the suit against Saunders, the Grand claims that it acquired losses in the form of tenant relocation and rent reduction. But in their suit, the plaintiffs say that they “received no reduction in rent and no payment for having to relocate to hotels for long periods of time due to flooding issues, despite false promises from The Grand that such compensation would be paid.”

Their filing also addresses safety issues with the elevators and the lack of fire suppression systems. “In order for a fire-suppression system to work properly, as a matter of simple physics, the plumbing system must be capable of holding and delivering large quantities of water at high pressure,” it says. “Because The Grand’s plumbing system was in effect like a block of Swiss cheese, riddled with leaks, holes, and constantly draining itself into the tenant’s living spaces, it was incapable of performing its most basic task in two high-rise luxury apartment buildings: putting out fires.”

The fact that there was no working pool or gym despite tenants theoretically paying a premium for those amenities plays into the deceitful nature of the leases that the tenants signed, the lawsuit argues: “The Grand’s website, to this day, reflects a community that bears no resemblance to the surreal hellhole inflicted upon the tenants."

And in eventually kicking them out, there was further deceit, the suit charges.

“Planning to shut down the whole building when they weren't really required to by the city or anybody else, that's not something that happens in a vacuum,” Hicks says.

In July, both the Denver planning and fire departments confirmed to Westword that neither entity had forced the Grand to close.

At first, tenants were told they would get 65 days' notice before having to move out before the company shortened the time period to thirty days. “This communication falsely stated that requiring tenants to move out was in compliance with the lease,” the lawsuit says. “This communication also falsely stated that the tenants, including Plaintiffs, could be lawfully evicted if they did not comply. The Grand failed and refused to compensate the tenants, including Plaintiffs, for their move-out expenses, which were done last-minute because of The Grand’s own fraud, and packed an already overwhelmed Denver marketplace for moving companies to such a degree as to impose additional costs on the Plaintiffs.”

Hicks says he'd never seen anything like it. “Whatever the lease says, the Warranty of Habitability specialists say that the only time you can get someone to leave like that is if there's what's called a catastrophic casualty event,” he notes. “That's like a tornado. That is an unpredictable, one-time event where the building was fine before.”

To cap it off, the Grand tried to get tenants to sign non-disparagement and confidentiality documents so that they wouldn’t be able to speak about their experiences. While Hicks says he doesn’t believe any of his current clients signed those documents, in the complaint he argues that such documents should be voided because they were rooted in the illegal procedure of kicking the tenants out without the required amount of notice or a proper eviction procedure. He hopes the court will agree so that people who did sign the documents can join the case if it's certified for a class action.

Official claims for relief include breach of contract, violation of the Colorado Consumer Protection Act, fraudulent misrepresentation, deceit based on fraudulent concealment, breach of Warrant of Habitability, unlawful removal or exclusion, and breach of duty of good faith and fair dealing.

The filing also asks for declaratory judgment so that the case can qualify for class action, and anyone who'd signed the confidentiality agreement would have it automatically voided.

Hicks originally submitted the suit on October 31, then dismissed and refiled it on November 1 after Judge David Goldberg told him that the filing was too colorful and included “trite and inflammatory language.” No judge had said that to him before, Hicks says, but he admits that he tries to keep legal filings interesting, because "there's nothing worse than being boring."

Except, perhaps, what the Grand did to these tenants.

Greystar, Chestnut Place and Saunders Construction did not respond to a request for comment. But they'll have a chance to state their case in court.
KEEP WESTWORD FREE... Since we started Westword, it has been defined as the free, independent voice of Denver, and we'd like to keep it that way. With local media under siege, it's more important than ever for us to rally support behind funding our local journalism. You can help by participating in our "I Support" program, allowing us to keep offering readers access to our incisive coverage of local news, food and culture with no paywalls.
Make a one-time donation today for as little as $1.