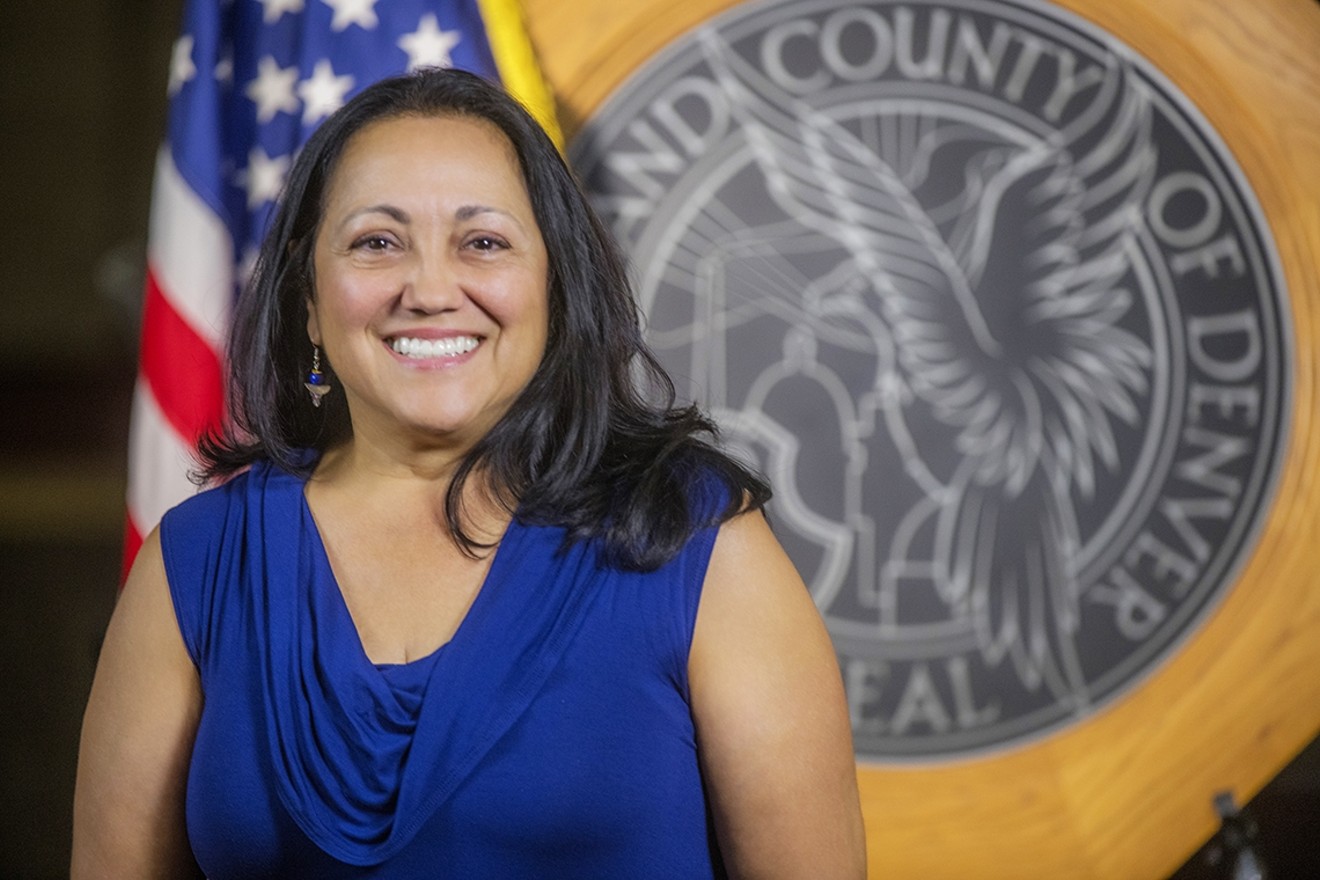 Debbie Ortega got a boost for her mayoral candidacy. City of Denver
Of the 23 people now vying to become Denver mayor in 2023, many are planning to get a public-financing boost through the new Fair Elections Fund. One of those candidates, Debbie Ortega, is getting an extra lift through an old-school independent expenditure committee, though not through any of her own doing.

"A group of supporters reached out to me. They believe that Ortega is the perfect person to be the next mayor of Denver," explains Amy Sanchez, a political consultant who set up Protect Denver's Future, an independent expenditure committee focused on getting Ortega, now ending her third term as an at-large member of Denver City Council, elected Denver mayor. Sanchez previously worked in Ortega's council office, and also served as manager of government affairs at Denver International Airport.

Independent expenditure committees, which must register with the Denver Election Division, can take as much money as they want from any source, and don't need to reveal those donors if they set up a shell organization. But they also cannot coordinate their efforts with whatever candidate they might be promoting.

"There are no loopholes in the city. There's no coordination," Sanchez says of Protect Denver's Future.

Ortega, who served on council from 1987 to 2003 and again starting in 2010, says she did not know about the existence of the committee created to boost her candidacy. "Wow. It's nice to know I have support out there," she acknowledges.

Committee for a Great Denver, an independent expenditure committee, was set up to support Mayor Michael Hancock's candidacy in the 2019 race. At the same time, a second IEC, Friends for Denver's Future, opposed Hancock's candidacy. Hancock and newcomer Jamie Giellis got the most votes in the first round and headed to a runoff. During the intervening weeks, another independent expenditure committee funded mailers opposing Hancock, while a fourth IEC paid for mailers opposing Giellis.

The field of mayoral candidates has grown rapidly in the past month as the April 4 election to replace the term-limited Hancock nears.

"It's a wide field. I'm sure it'll expand and shrink as we go," says Sanchez. "I don't need to tell you Debbie's experience and years of working in the city. She's very desirable for folks. She spent a lot of time busting and serving the people."

Sanchez declines to say how much money Protect Denver's Future has taken in, but on November 16, the committee made its first expenditure: $10,000 to the Strategy Division, a company with offices in New York and Denver, to create digital ads that have already started showing up online.

According to a recent audit by the office of Denver Auditor Timothy O'Brien, Mission Yogurt reported making over $46 million in 2021 from its nine concessions at DIA. The audit criticized DIA's oversight, citing Etai's Cafe, a Mission Yogurt concession, as an example of a business that did not receive enough scrutiny. Even so, the audit did not suggest any wrongdoing by Mission Yogurt.

Independent expenditure committees, which are largely protected by the 2010 U.S. Supreme Court decision Citizens United v. FEC, allow for supporters of a certain candidate to essentially skirt contribution limits and also hide funding sources. That's why IEC funds are often referred to as "dark money," and sometimes pay for the dirtiest parts of contested campaigns.

Owen Perkins of Clean Slate Now Action, which focuses on getting rid of big money in politics and pushed the Fair Election Funds, isn't sure of the role that IECs will play in the crowded 2023 Denver mayoral race.

"There historically has not seemed to be a direct correlation, but where the main factor gets pointed out in studies over and over again — the competitiveness of the race — that's the biggest factor in attracting dark money," Perkins says. "When people can see where the money is coming from, it makes a big difference. I think the voters in Denver are pretty well educated on these kinds of issues."

"We have only had one IEC report any spending so far. We do not have a good enough amount of data to make any apples-to-apples comparisons between other cycles," says Andy Szekeres, campaign finance administrator for the Denver Elections Division. "That being said, in other municipalities that have fundraising matches, the trend is more outside spending has been commonplace. But generally the trend overall across the political spectrum is that outside spending groups are getting more involved in the electoral process."

While Mission Yogurt's association with Protect Denver's Future is no secret, Sanchez still won't reveal who asked her to form the committee. "I would say there's a group of three to six folks that wanted to get behind this and wanted to get the ball rolling," she says.

Rod Tafoya, Mission Yogurt's owner, did not return an email or voicemail seeking comment about the contribution to Protect Denver's Future.
KEEP WESTWORD FREE... Since we started Westword, it has been defined as the free, independent voice of Denver, and we'd like to keep it that way. With local media under siege, it's more important than ever for us to rally support behind funding our local journalism. You can help by participating in our "I Support" program, allowing us to keep offering readers access to our incisive coverage of local news, food and culture with no paywalls.
Make a one-time donation today for as little as $1.