How Different Are Hancock and Giellis's Policies? We Asked Them

Jamie Giellis, left, at a May 21 press conference, and Michael Hancock during a May 14 event. Michael Roberts
One oft-heard allegation during the campaign for Denver mayor is that the platforms of incumbent Michael Hancock and opponent Jamie Giellis are more similar than either would care to admit.

Since both rebuff this theory, we asked them to prove it by highlighting four major areas where they differ. Each agreed to take on this task.

JAMIE GIELLIS
Disagreement 1: “First and foremost, I look at the planning and zoning piece, and how the mayor’s administration has empowered developers so they have the right to rezone and rezone and rezone, directing the buildout of our city from their perspective rather than ours. The zoning code needs to be amended, and we need to stop the practice of one-off rezonings every single Monday night at city council. We need to direct strategically how our city builds out, with neighborhoods being protected in certain ways, mostly because they weren’t built for extreme density. We don’t have all the infrastructure or utilities or transportation to support that. But we also have plenty of places where we can build in the city and have it make sense — especially along existing or future transit corridors.”

Disagreement 2: “Transportation — especially intra-city transportation. I know Michael has now talked about moving forward on transportation, although he hasn’t really identified what that looks like — and the fact that we haven’t moved forward on intra-city transit has already started to cripple us because of the congestion here. We need to make that investment a huge priority, because we need to build the intra-city network out and provide transit alternatives.”

Disagreement 3: “From an economic point of view, the mayor’s administration has done relatively little to support our small businesses, or to support existing industry so that it’s able to stay here. Right before the election, some of the property tax pre-assessments came out, and we saw yet again significant hikes. I think it’s critical that we look at that. Even if assessments go up, we have the ability to look at how we support small businesses or where people are struggling. We can’t just keep going up, up, up without recognizing that’s going to hit our economy hard. We already have workers who can’t afford to live here. Michael talks about a world-class city and a booming economy, and those things are great. But they’re not great if everybody isn’t able to lift up at the same time and wages are still stagnant. So from small businesses to residences, the tax issue has to be looked at.”

Disagreement 4: “Parks and the environment. The Denver Post did a three-part series earlier this year on our loss of green space and looked at factors related to greening and the environment. Air quality is now worse than it was in the 1980s. So we need to be bolder on air quality, water quality, green spaces, park spaces, cleaning up the Platte River. So much of the quality of life in Denver is tied to our outdoor environment, and it feels like we haven’t cared for that. Not developing our park land, not developing Park Hill Golf Course: Those things alone are quite different from what Michael has proposed.” 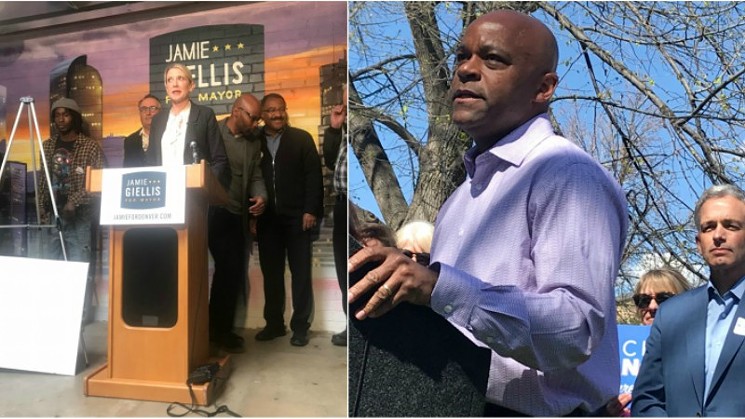 Disagreement 2: “The second one is the Green Roof initiative, where she says, ‘I want to go back to the original bill.’ After six months of implementation, even the authors of the bill came forward and said, ‘We need to change this. We didn’t really understand the unintended consequences of the policy that we put before the City of Denver. We have to improve it.’ And as a result of that collaboration and compromise, we actually have a broader, more comprehensive strategy that gives buildings options for how we accomplish sustainability.”

Disagreement 3: “The trolley-streetcar policy she has talked about. Streetcars were looked at around the time Jamie was moving to Denver. I talked a lot about it in the 2011 election, because my opponent [Chris Romer] brought it forward, and it was rejected for its cost. If she would have looked back, she would have seen that. And it’s not the answer to the mobility challenges we have in Denver. Streetcars are two or three times more expensive than bus-rapid transit, and they don’t really connect people to neighborhoods. They don’t help small businesses when folks are rolling right through, and while it seems fancy, it doesn’t really serve the people who most need mobility along corridors like Colfax. There aren’t many places around the country using streetcars these days, and when they do, it’s used as an economic driver for areas that need to be revitalized. In other words, it’s a tool for gentrification. So I’m not sure Jamie has done her homework.”

Disagreement 4: “One other thing that’s really concerning is that Jamie has talked about dispersing neighborhood planning offices through the city of Denver. Denver has done that, and so have other cities, and a lot of them have pulled back from that — and so have we, because we found that it creates disparity between neighborhoods. If you’re in a well-to-do neighborhood where people have discretionary time, and not a working neighborhood where people are going to work every day, they have the ability to lean in and work with that neighborhood every day. So we saw the people in the wealthier neighborhoods getting what they wanted while the poorer neighborhoods struggled. It also disconnected the planners from the multiple agencies they must work with in order to carry forth their responsibilities. And there was extraordinary cost because the city has to rent those facilities for planners to be in. So it was an untenable situation, and another example of how she lacks an understanding of where Denver has been and how Denver operates today.”
KEEP WESTWORD FREE... Since we started Westword, it has been defined as the free, independent voice of Denver, and we'd like to keep it that way. With local media under siege, it's more important than ever for us to rally support behind funding our local journalism. You can help by participating in our "I Support" program, allowing us to keep offering readers access to our incisive coverage of local news, food and culture with no paywalls.
Make a one-time donation today for as little as $1.