The High Line Canal trail is open to all different types of uses. Courtesy of Evan Anderman
Electric bikes are on a roll in Denver, thanks to a city rebate program that can take hundreds of dollars off the purchase of an e-bike. But while the rebates are clearly popular, there's plenty of confusion regarding the rules for riding e-bikes in the different municipalities that make up metro Denver. One minute the rider can be complying with the law, and a few feet farther along be breaking the rules.

The High Line Canal Trail runs through eight parks and recreation jurisdictions as it winds from northeast Denver through Adams County, Arapahoe County and Douglas County. Although the 71-mile trail is seamless, the rules governing it are not.

"The use of e-bikes on the High Line Canal Trail is managed by the jurisdictions. At this time, e-bikes are allowed on most sections of the 71-mile-long trail," says Connie Brown, community relations and development specialist for the High Line Canal Conservancy.

"In general, we really want to make sure that people are aware that it’s a shared trail," says Suzanna Fry Jones, senior director of programs and partnerships for the conservancy, a nonprofit dedicated to preserving and promoting the trail that she notes is used by "walkers, hikers, joggers, people with families, dog walkers and, in some areas, equestrians...and cyclists."

That adds up to more than 500,000 people a year sharing the trail, according to the conservancy. 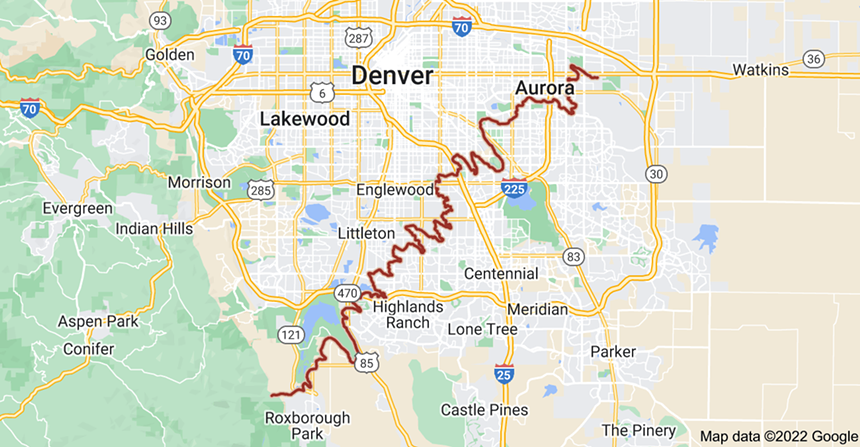 The High Line Canal Trail goes through eight jurisdictions over 71 miles.
Google Map
People riding Class I or II e-bikes, both of which have an electrical assist capped at 20 miles per hour, are allowed on the portion of the High Line Canal Trail that runs through Denver city limits, just as they can use any multi-use trail in the city. Class III e-bikes, which have a maximum motor-assisted speed of 28 miles per hour, are also allowed on Denver trails after a 2020 rule change.

"The biggest rule is that bikes, e-devices, anything on our trail, any device, should be traveling on our trails at a speed of 15 miles per hour or less," says Sam Gannon, the park ranger supervisor for Denver Parks and Recreation's trail district. But speeding issues aren't just about e-bikes, he notes; he sees people going too fast on regular bikes, scooters and other devices, too.

In recent years, thanks to the pandemic-related boom of people trying to spend more time outdoors, Denver trails have become more crowded. And that's caused some issues, particularly with people who don't know the rules.

"We have noticed, since 2019, that bicycle etiquette across the board, from bicycles to e-devices, has really changed," Gannon says. "Less people do announce themselves," he adds, citing the trail etiquette that calls for bikers to announce when they're going to pass someone on the left.

"We see the trails become busier, but we’re happy about that," Gannon notes. "We want to encourage safe, positive use."

Not every jurisdiction along the High Line Canal Trail is so e-bike friendly.

"It is unlawful to drive any motor vehicle in any park or on any trail within the City," according to the Cherry Hills Village Municipal Code, which defines a "motor vehicle" as "any wheeled vehicle propelled wholly or in part by internal combustion or electric engine or motor." The municipal code does make exceptions for electric wheelchairs and governmental and utility company motor vehicles.

In recent years, Cherry Hills Village's Park, Trails and Recreation Commission, as well as its city council, explored whether to lift that ban in the exclusive suburb. However, the council ultimately decided against doing so, citing concerns about speeding on the High Line Canal Trail and a deluge of public comments that opposed any change.

But some Cherry Hills Village residents would still like to see the ban lifted.

"E-bikes have proven revolutionary, particularly allowing older bicycle riders to continue after they might have 'aged out' of riding standard bicycles. This promotes mobility, physical exercise, recreation and a sense of well-being that in fact is rooted in reality. E-bikes are not fundamentally different from standard bicycles, and thus should be subject to the same speed limits and other regulations," Richard Spritz and Diana Dills, two physicians who live in the town, wrote in a January 2021 letter to the Cherry Hills Parks, Trails and Recreation Commission; Spritz says he still stands by that sentiment

E-bikes are also not allowed on the portion of High Line Canal Trail that starts in Waterton Canyon, which is overseen by Denver Water and the U.S. Forest Service.

"To ensure a mutual understanding for how we manage Waterton Canyon for recreation, Denver Water entered into the 1979 Foothills Agreement with the U.S. Forest Service and the Bureau of Land Management. The agreement prohibits the use of motorized devices in the canyon. We are committed to having discussions to help find the best solutions with our partners and for our community, which will require a formal process that will take time," says Travis Thompson, communications manager at Denver Water, noting that exceptions can be made for "Class I and II e-bikes used as part of an ADA accommodation."

Mile one of the trail, Kassler Center at Waterton Canyon.
High Line Canal Trail
One other municipality along the High Line Canal also bans e-bikes...maybe.

"For parks and trails, it appears [Class I and II] e-bikes are allowed where regular bikes are allowed, except for the High Line Canal Trail," says Michael Brannen, senior media relations strategist for the City of Aurora.

The rules could be changing in Aurora, though. "E-bikes are allowed on the High Line Canal just like any other bike trail in Aurora, though the rules and regulations have yet to be officially updated to reflect this," say Brown. "So for us at the conservancy, it’s still kind of this gray area. Since Aurora manages the trail through the city, it is up to their discretion whether e-bikes are allowed on the HLC trail."

"Based on the conservancy’s response, it appears they are giving Aurora the discretion about banning e-bikes," notes Brannen. "Since our current parks rules state that e-bikes are banned on the High Line Canal Trail, we’d officially note that e-bikes are not allowed."

"I had asked the city attorney’s office about our code as it pertained to wheelchairs and e-bikes on bike paths, and his office said that both are not prohibited, therefore allowed," he says. "I’ll follow up with them for clarification about the High Line Canal Trail specifically. I would absolutely be supportive of allowing e-bikes on that path if they’re somehow forbidden."

E-bikes are allowed on the High Line Canal Trail where it runs through Greenwood Village and Highlands Ranch; they're also allowed on the sections overseen by Douglas County and South Suburban Parks and Recreation.

Rob Toftness, co-founder of the Denver Bicycle Lobby, wonders how many of these bans date back to the days before modern e-bikes.

"It seems really silly to have a patchwork of rules, because it’s kind of confusing for everyone involved," says Toftness. "If you hop in a car and you’re taking a journey, you don’t all of a sudden expect to hit an invisible border and not be allowed to be there."

Update: This story was updated at 4 p.m. July 13 to note that South Suburban Parks and Recreation does allow e-bikes on trails, including the High Line Canal. Also, Class III e-bikes have been allowed on Denver trails since a 2020 rule change. And for the record, Aurora researched the issue, and determined that e-bikes are allowed on the portion that runs through Aurora.
KEEP WESTWORD FREE... Since we started Westword, it has been defined as the free, independent voice of Denver, and we'd like to keep it that way. With local media under siege, it's more important than ever for us to rally support behind funding our local journalism. You can help by participating in our "I Support" program, allowing us to keep offering readers access to our incisive coverage of local news, food and culture with no paywalls.
Make a one-time donation today for as little as $1.