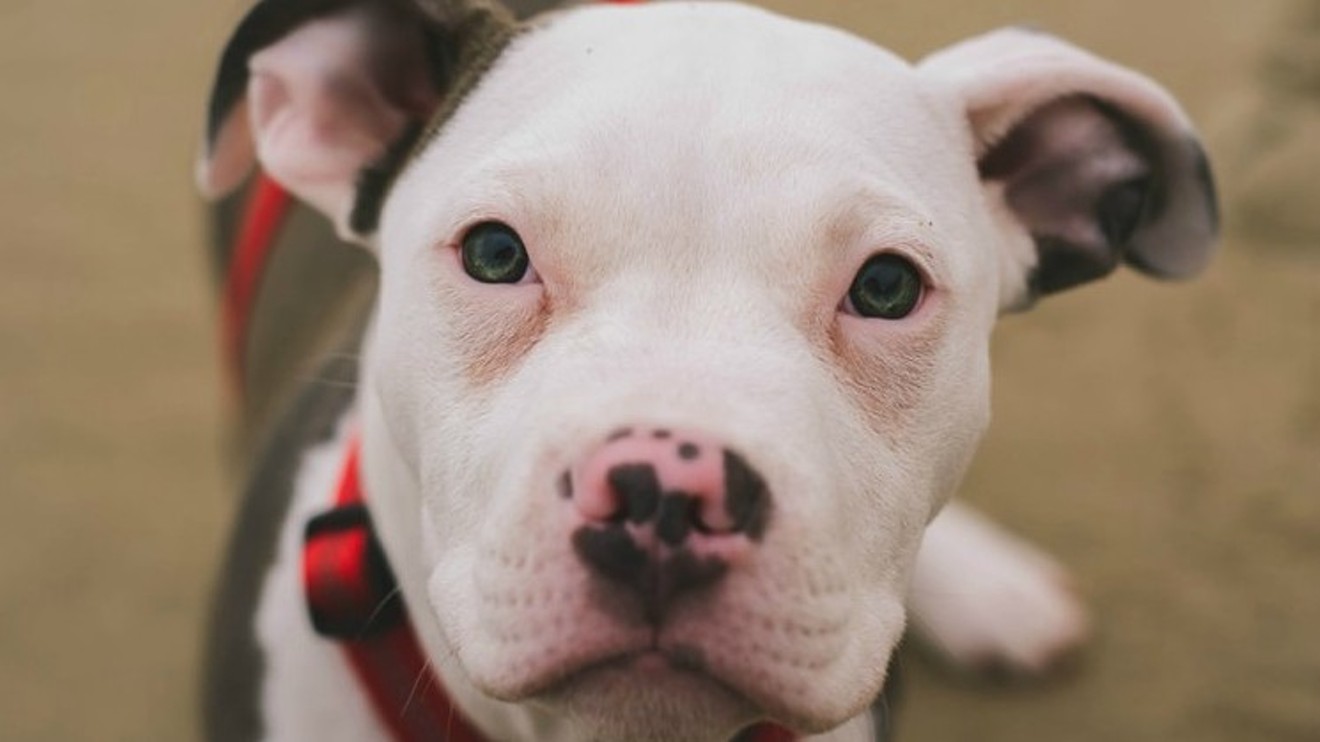 Photo by Lucas Ludwig on Unsplash
In February, in the weeks before the COVID-19 pandemic changed the world as we know it, one of the biggest stories in Denver involved the effort to rid the city of its three-decade-old prohibition on owning pit bulls. Although Denver City Council passed a proposal by member Chris Herndon to create special, provisional licenses for three banned breeds, Mayor Michael Hancock, under heavy pressure from interest groups in the community, vetoed the measure — and the council fell one vote shy of overriding him.

But the issue hasn't gone away. Earlier this month, councilmembers unanimously agreed to place the measure on the November 3 ballot, thereby giving Denver residents the power to decide for themselves if they buy Herndon's argument in favor of the plan. As he told us earlier this year, "We know these breeds are in our community — and because they're banned, there's a higher possibility that the owner won't seek out professional guidance or even proper pet care. And right now, we don't know where these dogs are. If the ordinance passes, we will, and that will make our community safer."

Replace Denver BSL (the letters stand for "breed-specific legislation") is the organization that led the fight in support of Herndon's proposition the first time around, and co-founder Shira Hereld says she and her cohorts are now gearing up a new campaign to bring pit bulls out of the shadows in Denver.

"We know it's going to be a big challenge," Hereld says, "and so much is riding on this."

In 2009, Westword published writer Jared Jacang Maher's definitive history of the Denver pit bull ban on its twentieth anniversary. He traced the breed's criminal status to May 8, 1989, "when Wilbur Billingsley headed to the store to pick up some items for his wife. He'd only gotten as far as the alley behind his home in Denver's San Rafael neighborhood when a dog attacked him. Billingsley, a 58-year-old evangelical pastor, fell to the ground, and the dog started ripping into his legs." The pastor was bitten more than seventy times and suffered two broken legs and a shattered right kneecap in the assault, by a five-year-old pit bull named Tate.

No surprise that this incident received a tremendous amount of attention from the press, which reported about it in the context of incidents both local (in October 1986, a three-year-old Denver boy was killed by a pit bull after he wandered onto a neighbor's property) and national (a seven-year-old Miami girl was mauled by a pit bull in February 1989). As a result, Denver City Council members Ramona Martinez and Mary DeGroot began pushing a proposition that would target three named breeds — American Pit Bull Terriers, American Staffordshire Terriers and Staffordshire Bull Terriers — as well as "any dog displaying the majority of physical traits of any one or more of the above breeds."

The resulting hearings were extremely contentious; hundreds of Denver residents shared their views with tremendous passion. But the measure passed and was signed by Mayor Federico Peña in August 1989. An organization called Colorado Dog Fanciers countered by filing a lawsuit against the city. In 1992, however, the Colorado Supreme Court upheld a lower court ruling that supported Denver's right to pass the law.

In Hereld's view, the edict hasn't accomplished its purpose. Her group's main message "is always going to be that if you want to make Denver safe, you need to be focusing your resources somewhere other than breed-specific legislation. It's horrifying when dogs bite or attack children, but what we have in its place isn't working, and it isn't going to protect your children."

She also stresses that Replace Denver BSL's participation in the issue won't end with the election, using the Montbello neighborhood as an example. "They have a bigger stray-dog issue than a lot of other neighborhoods, and there's also an age divide; a lot of young people are more likely to vote yes, but older folks are less likely to, because they grew up in the age of dog-fighting and gang violence. So we're going to go into Montbello and really focus on stray dogs and leashing. We're telling people there, 'We want to come back and continue to support you and improve dog safety in your neighborhood.' And I think a lot of what we'll learn will help us with future educational pushes."

Replace Denver BSL is hoping to raise $50,000 to fund these efforts, and it's already made considerable progress toward that goal; the amount pledged to date on its GoFundMe page has topped $12,000. The idea is to focus on social media, as well as "to reach people over text, email and through socially distanced and disinfected fliers," she points out. Billboards and radio advertising are possibilities, too. Meanwhile, the group is actively recruiting volunteers, and over 100 people have already expressed interest in taking part.

One more ask from Hereld: "It's going to be a really long ballot this year, and that may be intimidating for some people, who'll just vote for president and then send it in. So we'd love for them to find our initiative and then switch back to the beginning and start again. Please take the time to actually vote yes, because when a ballot initiative fails, usually the issue is untouchable for several years."

And it's already been more than thirty.
KEEP WESTWORD FREE... Since we started Westword, it has been defined as the free, independent voice of Denver, and we'd like to keep it that way. With local media under siege, it's more important than ever for us to rally support behind funding our local journalism. You can help by participating in our "I Support" program, allowing us to keep offering readers access to our incisive coverage of local news, food and culture with no paywalls.
Make a one-time donation today for as little as $1.