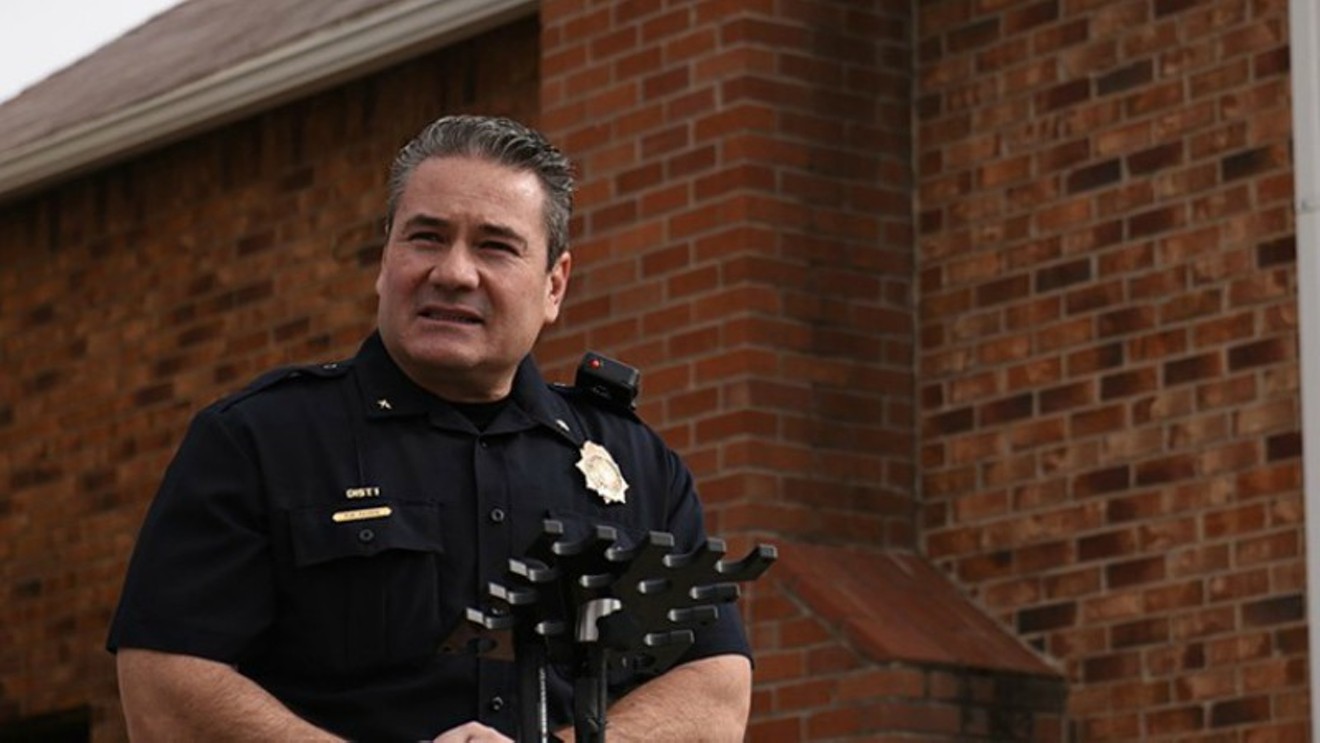 Denver Police Chief Paul Pazen feels that the new use-of-force policy has helped incidents trend downward. Kenzie Bruce
It took eighteen controversy-filled months before the Denver Police Department was finally able to unveil a revised use-of-force policy in August 2018, and months more for all 1,500-plus members of the DPD to undergo training in how to follow its recommendations, which encourage the deployment of de-escalation techniques whenever possible. But the new procedures appear to be having a positive effect.

According to Denver Police Chief Paul Pazen, use-of-force incidents during arrests are down more than 21 percent during the first six months of 2019 as compared to the same span over the previous three years.

"We've followed up the policy with strong training and continued messaging," Pazen says. "Those are some of the reasons we have this significant drop."

Pazen adds that the DPD is developing a new use-of-force training approach employing virtual-reality technology that is expected to be rolled out in the near future. "We have some scenarios that our PIO [public-information officer] team was able to create based on previous incidents and touch points, and it's going to allow us to walk our folks through them in a 360-degree wrap-around video simulator that will help identify key areas for de-escalation and really move us forward in this continual improvement process. I think we will be leading the country in this type of effort."

Denver use-of-force data from 2015 to 2018 is accessible below. Use-of-force incidents during arrests over the past three years have been trending down to a minor degree: 519 in 2016, 516 in 2017 and 492 in 2018. (Note that a separate metric includes injuries prior to arrest and injuries while in custody.) However, department statisticians have drilled down further and determined that an average of 261 use-of-force incidents during arrests took place from January 1 to June 30 of those years.

Denver Police Chief Robert White started the process to revising the use-of-force policy.
Brandon Marshall
The road to these results was long and preceded Pazen's swearing-in as chief of police in July 2018. Indeed, former Denver police chief Robert White, who had announced his retirement the previous April, inaugurated the process, which sparked criticism in January 2017 because of the department's methodology. Unlike the Denver Sheriff Department, which employed a diverse task force in the rewriting of its own use-of-force policy in 2016, the DPD didn't initially invite civic organizations, the Office of the Independent Monitor or even police union representatives to participate in developing the draft. And while the department encouraged members of the public to weigh in online about the draft proposal, no community meetings were originally scheduled.

This last fact frustrated groups such as the Colorado Latino Forum, which launched a Change.org petition titled "Demand That the Denver Police Department Include Community Voice!" In the introduction to the petition, forum co-chair Lisa Calderón, a future mayoral candidate and current chief of staff for Denver City Council member Candi CdeBaca, was quoted as saying, "We are talking about policies that can directly impact people’s lives during a police encounter, yet we have no voice in this process. Any public policy that was created in secrecy will lack legitimacy with the community."

In the days that followed, a chastened Chief White changed course and quickly scheduled three community meetings, kicking off extended back-and-forths with various stakeholders that continued well into the following year.

The tone of the final draft introduced by Pazen (it's also shared at the bottom of this post) is captured in its first two paragraphs:


The Denver Police Department’s objective is to deliver high quality public safety services. The department recognizes the value and sanctity of all human life and is committed to respecting and protecting the dignity, safety, and civil rights of community members, including the right to be free from inappropriate force.

Officers may, at times, be required to make forcible arrests, defend themselves or others, and overcome resistance. The department’s goal for the protection of both officers and the community is that officers should attempt to use non-force alternatives, including de-escalation, when time and circumstances permit. When needed, officers must use only the amount of force reasonable and necessary under the totality of the circumstances to safely accomplish a lawful purpose.

The document defines de-escalation as "actions or verbal/non-verbal communication during a potential force encounter used to stabilize the situation and/or reduce the immediacy of the threat, so that more time, options, and resources are available for resolution without the use of force or with a reduced type of force, or reducing or ending a use of force after a resistance or threat has ceased or diminished." Prior to using force, it continues, "officers will identify themselves as a police officer, attempt to de-escalate, use tactical and control options, give commands to be followed, and afford the person a reasonable opportunity to comply."

Tactical and control options are "physical actions or maneuvers that are designed to increase the likelihood of safely handling a potential use of force situation while attempting to reduce the need for force or the amount of force necessary." They may include "command presence," "advisements," "warnings," "verbal persuasion and commands" and "time, distance and cover (withdrawing to a position more tactically secure or which allows greater distance to consider or deploy a greater variety of force options)."

Beyond that, though, "we knew that the training was just as important as implementing a strong policy," Pazen continues. "We had to make sure each and every member of the department, including myself, had the opportunity to ask questions face-to-face — to get all the experts together and really dive into it instead of just having a policy, pushing it out in an email message and saying, 'Follow this.' There's so much nuance to it, so much to de-escalation, that we knew if we could provide additional training from folks at the [Denver Police] Academy and folks at Internal Affairs, we could really help avoid some of these situations — because knowledge and awareness can prevent some of these things from occurring."

The training comprised what Pazen refers to as "an eight-hour mandatory course where it wasn't just reading the policy and saying, 'Here's the deal.' Our team came up with video incidents from across the country and then talked about them, pointing out opportunities for de-escalation. It was pretty interactive. You couldn't just go there and sit and be quiet and remove yourself from the training aspect. There were so many prompts for participation that you had to take part."

Because the training sessions concluded near the end of 2018, the new year provided an opportunity to see if they made a difference. So far they have, and Pazen is confident that will be borne out by data from 2019 as a whole that will be formally released in February 2020 — an example of the transparency mandated by the policy. "We're committed to that just as we are committed to enhancing our ability to train officers to work with the community as well," he says. "We're going to talk with community members about what's working and what's not working in the vein of continuous improvement. And we want as many different voices at the table as we can. If there are certain things that we can identify that can help us, we should be able to come up with ways to reduce the number even further."

He emphasizes that he doesn't see the reduction in use-of-force incidents during arrests as the accomplishment of a goal. "We will not just plant the flag and say, 'We've arrived.' Just like with domestic-violence incidents, we're not going to say, 'We figured it all out,' and leave it. We're constantly trying to find ways to improve on these different aspects, which is why we're going into virtual reality. We want to keep doing better."

Click to read the August 2018 Denver Police Department use-of-force policy and DPD use-of-force data from 2015 to 2018.
KEEP WESTWORD FREE... Since we started Westword, it has been defined as the free, independent voice of Denver, and we'd like to keep it that way. With local media under siege, it's more important than ever for us to rally support behind funding our local journalism. You can help by participating in our "I Support" program, allowing us to keep offering readers access to our incisive coverage of local news, food and culture with no paywalls.
Make a one-time donation today for as little as $1.