Are Denver Cops Using Body-Camera Video Like a Cheat Sheet? 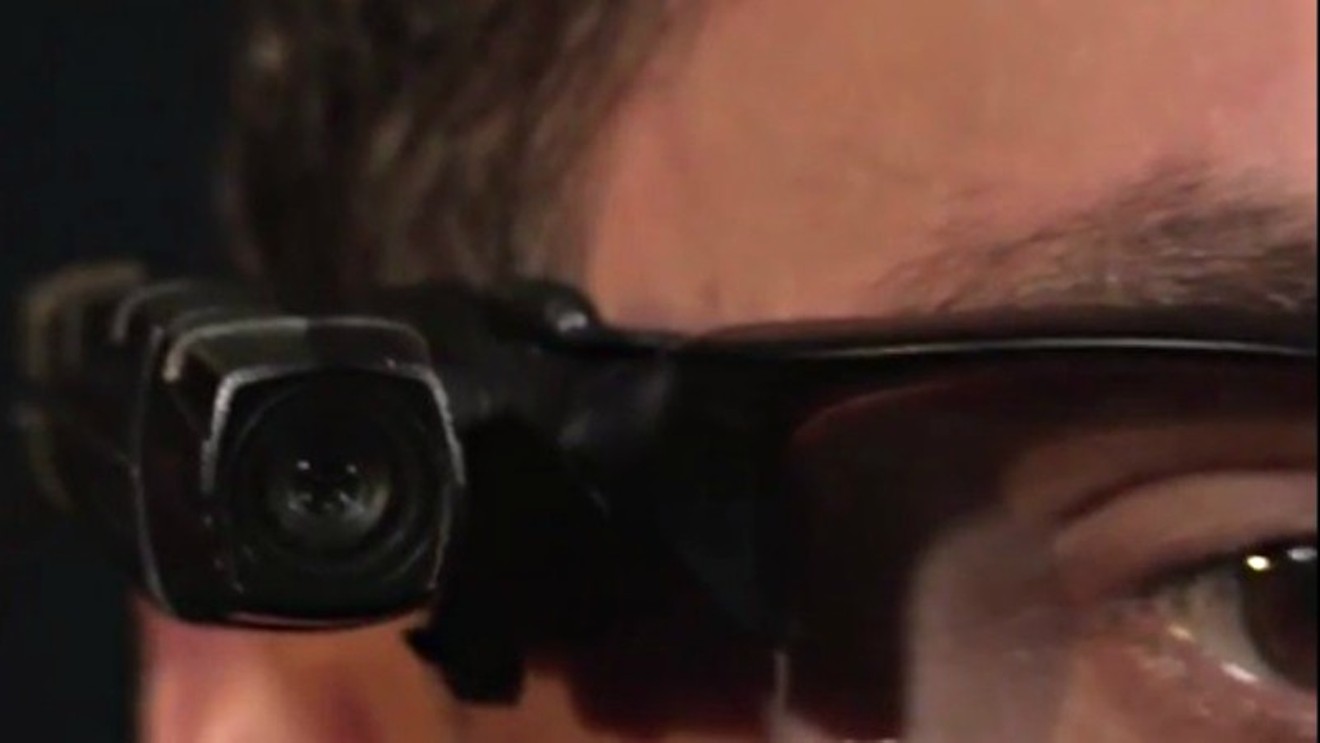 A glasses-mounted video camera, as seen in a Denver Police Department video. Denver Police Department file photo
At present, cops employed by the Denver Police Department are routinely allowed to view body-camera video before writing reports about officer-involved shootings or in-custody deaths. In a report accessible below, a committee advising the DPD on its use-of-force policy advocates that this policy be changed in order to even the playing field with other witnesses and prevent officers from being able to spin accounts in favorable ways that fit the footage. But Chief Robert White is noncommittal about whether he'll take this counsel.

The department launched a pilot program for body-worn cameras (abbreviated as BWCs) in 2014, and while the concept has generally been lauded by police reformers, criticism has cropped up over some aspects of implementation. That's particularly been true in regard to personnel who were initially excluded from participation despite encouragement from the Office of the Independent Monitor, which oversees DPD activities, to use the devices as widely as possible. In September 2015, for example, the department announced that off-duty officers wouldn't be required to wear BWCs before caving under public pressure a couple of weeks later. The following month, the DPD announced that sergeants would also be outfitted with cameras after previously opposing their inclusion in the program, too.

Nonetheless, Denver police officials have held fast when it comes to blocking SWAT team usage of body-worn cameras, despite recommendations from Independent Monitor Nicholas Mitchell that the department "assign BWCs to all uniformed officers who interact with the public, regardless of rank, and whether they are working on- or off-duty, including officers in specialized units such as Metro/SWAT." A big reason for this argument: Of ten Denver officers involved in shootings circa 2014, two of them, or 20 percent, were assigned to SWAT.

Why doesn't the DPD routinely require all SWAT teamers to wear the cameras? "For security reasons, we want to keep those tactics confidential," Commander James Henning told us for a post published in August. "We don't want to give away all of our secrets."

The previous April, Chief White created the Use of Force Policy Advisory Committee "to provide community members an opportunity to supply additional feedback on the DPD's draft use of force policy," notes a statement from the committee also linked at the bottom of this item. Over the next six months, the statement points out, members of the committee (they're listed here, too) met weekly at various locations across Denver and staged a community forum at Denver Park Hill Seventh-day Adventist Church. Assorted city officials, including DPD deputy chief Matt Murray and the OIM's Mitchell, offered support throughout the process.

The topic of body-worn cameras takes up a significant amount of the thirty-page report the committee eventually compiled. An example is the following paragraph regarding officers' access to BWC video:


Consistent with the investigation procedures for non-DPD witnesses, following any officer-involved shooting or in-custody death, each involved officer shall be asked to voluntarily provide a statement to investigators prior to reviewing any audio or video recordings. After providing a statement, each officer may review footage from their own body worn camera and supplement their statement with additional information if necessary.

A Denver Police Department image of an officer activating a body-worn camera.
Denver Police Department file photo
In the hope of learning Chief White's opinion about this suggestion, we reached out to DPD public-information officer Doug Schepman. Responding via email, Schepman sent us the pertinent language about this subject from the department's operations manual: "Officers are authorized to review their own BWC recording when preparing official written documentation of a specific event. Officers may only review recordings from their assigned BWC. The viewing will be utilized as a tool when completing written reports to ensure accuracy."

Schepman also provided information regarding two provisos to this rule:

If White is willing to eliminate these provisos, he's not ready to announce it. "Chief White appreciates the committee’s dedication and hard work in developing recommendations for the department’s Use of Force policy, and shared his gratitude with the members when they presented those recommendations," Schepman notes, adding, "Chief White is conducting a thorough review of the recommendations and intends to finalize policy revisions in early 2018."

Until then, officers who shoot a suspect will probably be able to look at video of what happened before making a statement, unlike the person who takes the bullet — if he's still alive, that is.

On a related topic, the Office of the Independent Monitor is hosting "Vulnerable Populations and Civilian Oversight," a training taking place Thursday and Friday, November 30 and December 1 at the Denver Post Building Auditorium, 101 West Colfax Avenue. The event is built around panels intended to empower groups such as young people suffering from mental illness, individuals without stable housing, LGBTQIA community members and disabled veterans that frequently have interactions with law enforcement. The suggested price for registration is $50, which covers breakfast and lunch on the 30th and breakfast on the 1st, but those without the ability to pay will be able to attend without charge. Get more details and read the agenda here.

Click to view the Denver Police Department Use of Force Policy Advisory Committee statement and the committee's complete report; the aforementioned BWC paragraph is on page 23. In the meantime, here's a list of the committee's members, several of whom represent co-sponsors of this week's OIM training: