How Denver Solved the Tragic Mystery of Arnis Ironnecklace 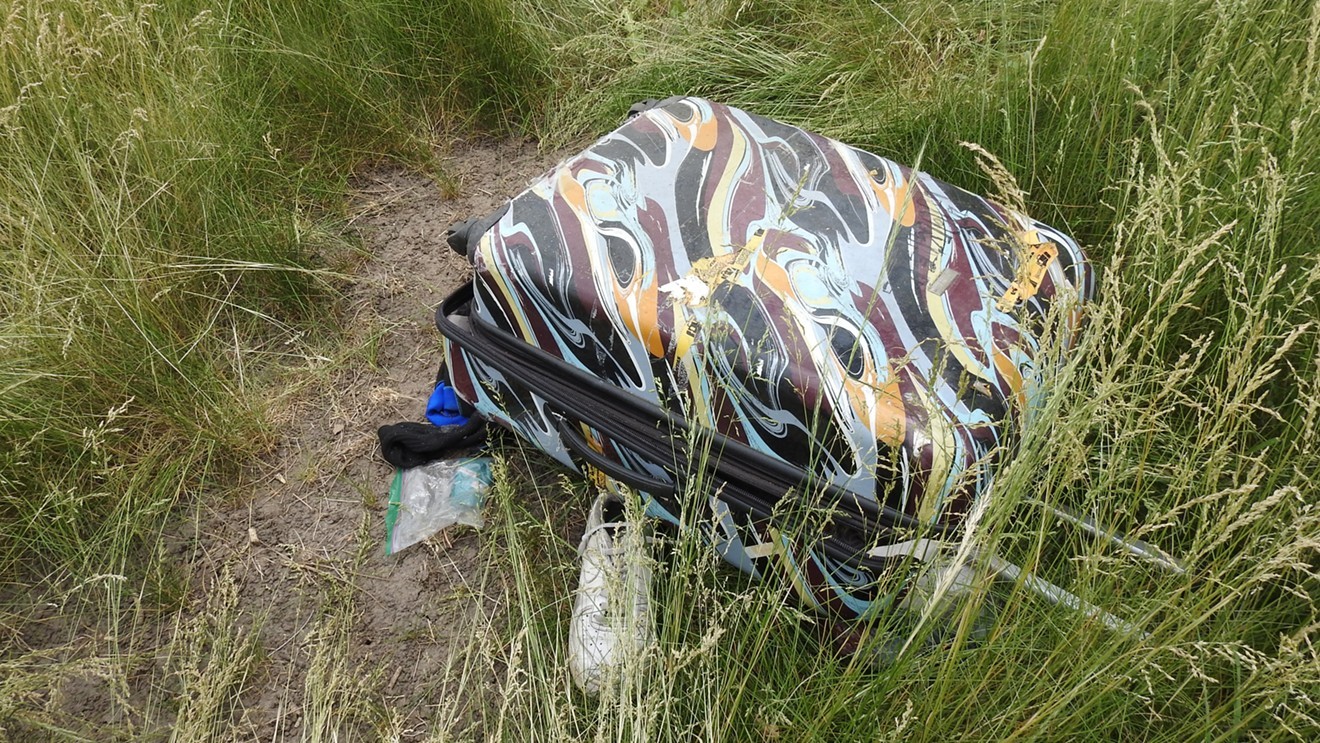 A suitcase found near the body of Arnis Ironnecklace, which was discovered in June 2021 near the Pecos exit on Interstate 70. denvergov.org
On June 13, Westword published "Seventeen Bodies Denver Is Trying to Identify," which focused on efforts to discover the names of sixteen men and one female infant who'd died in Denver between 1970 and 2021. But the Office of the Medical Examiner, an agency operating under the auspices of the Denver Department of Public Health and Environment, couldn't reveal until this week that one of the mysteries had actually been solved seven days earlier.

On June 6, the office had identified the remains of Arnis Ironnecklace, who was 41 years old when he was found dead on the 4700 block of Pecos Street on June 16, 2021. According to DDPHE spokesperson Tammy Vigil, his identity was not immediately made public in order to give staffers a chance to reach his relatives. "An OME investigator has contacted his family, who lives out of state, to advise them about his death," which was caused by "the combined toxic effects of fentanyl and ethanol," she notes.

The breakthrough on Ironnecklace's identity was the second achieved by the medical examiner's office over the past few months. In April, the DDPHE announced that one of its staffers, Hanah Shimeall, had successfully ID'd a man who'd died of natural causes 31 years earlier: Antonio Macias, a sixty-year-old Arizona resident whose body was found in a parking space at 723 West Seventh Avenue on September 9, 1990. On Facebook, the DDPHE wrote: "Thank you, Hanah, for the difficult but important work you do to bring answers to families dealing with tremendous grief."

Future efforts will be aided by a recent grant for a rapid DNA processor that could help the OME put names to bodies that aren't identifiable through fingerprints, dental profiles or any other tools. But more tried-and-true methods were the key to identifying Ironnecklace, whose remains were found by a land surveyor during an inspection near Interstate 70 and Pecos. While Ironnecklace's race couldn't be determined and his age was roughly estimated at "25-plus years," his wisdom teeth were present, and his body was found near a multicolored suitcase.

Federal authorities made the most of these clues, Vigil reveals: "We got some help from the FBI, who used additional fingerprinting techniques to capture a fingerprint from the decedent. That led to identifying him, since he had a criminal record on file."

The recent success stories, as well as the DNA processor that will soon arrive at the office, offer hope that Denver's medical examiner will be able to solve the sixteen mysteries that remain. Here's information about each, in reverse chronological order, with details from each listing, starting with the date the body was found.

February 22, 2002
Possibly Hispanic or Native American male
Age: Fifty-plus years
Height: Five-eight
Weight: 110 pounds
Hair: Gray with stubble on the face
Features: No front teeth. No tattoos or scars
Comments: This unknown male was found along the west bank of the South Platte River by a cleaning crew. The decedent was believed to be undomiciled.
Location: Sixth Avenue near the Denver Waste Management building

November 5, 1990
Caucasian male
Age: Thirty-plus years
Height: Five-seven
Weight: 120 pounds
Hair: Brown with stubble on the face
Features. Brown eyes. The decedent did not have any tattoos, scars or identifying marks
Location: I-70 and I-25

April 25, 1980
Hispanic or Native American male
Age: 35-plus years
Height: Five-ten
Weight: 123 pounds
Hair: Black with gray and a mustache
Features: Brown eyes and a tattoo of a female on left arm
Location: Under the 23rd Street viaduct

Click to access contact information for the Denver Office of the Medical Examiner.
KEEP WESTWORD FREE... Since we started Westword, it has been defined as the free, independent voice of Denver, and we'd like to keep it that way. With local media under siege, it's more important than ever for us to rally support behind funding our local journalism. You can help by participating in our "I Support" program, allowing us to keep offering readers access to our incisive coverage of local news, food and culture with no paywalls.
Make a one-time donation today for as little as $1.