Another Denver trend: Larimer is almost never this deserted. Geoff Livingston at Flickr

Denver has had its share of eras — but every year seems to mark the coming and going of some element of local culture, and 2017 was no different. Sure, we had the restaurants that opened and closed, the sports seasons that are, frankly, better left to the dustbin of history, and news that confused and concerned us and then faded out of our attention span to make room for more news.

But what from 2017 made its mark on Denver — elements of the year that have legs — and might influence our 2018? Here are ten trends Denver saw this past year that seem to have some staying power.


10. Goat yoga
Goat yoga. Yes, it's a thing, and, yes, we're talking about goats, those apocryphal tin-can-eating, bridge-crossing animals. We can learn something from goats, one presumes, but I’m not sure what. Eat what’s available? Maybe. Go with the flow, even when people around you are doing yoga? I guess, but the real lesson might be to steer clear of anyone requiring you to display admirable patience while someone else exhibits weird behavior. Keep calm and downward goat.

Trees: utterly replaceable, right?
Jeffrey Beall at Flickr
9. Urban renewal (whether we want it or not)
This year saw a number of infill and city renovations that were met with varying levels of opposition. Some were based in the politics of gentrification: the slow but inexorable conversion of RiNo from scrappy and cheap industrial wasteland to polished and decidedly not cheap hip residential neighborhood. The city shut down City Park Golf Course for two years — at least — to improve stormwater drainage...and remove most of its trees. And then there’s the the I-70 project that will restructure the ten-mile stretch from the Mousetrap to Chambers Road, affecting the primarily working-class neighborhoods of Elyria/Swansea and Globeville. The debate is multi-faceted, including objections based on everything from air pollution to bad design to gentrification, prompting signs to pop up all over town advocating that the city “Ditch the Ditch.” With all this going on (and more, surely, with the bond issues passed in November), will there be any part of Denver left to renovate? Will any part of the Mile High be available for moderately priced housing? Will your favorite hole-in-the-wall bar somehow keep from becoming a craft-beer-bistro parody of its former self? All signs point to no.

This is called a "sharrow," which is just fucking adorable.
Jeramey Jannene at Flickr
8. The rise of biking
We took time to enumerate the rules for polite biking a while back because there seem to be more people doing it. And why not? It’s a great way to get in some exercise and save yourself from the headaches (and the environmental impact) of a daily commute. And Denver’s doing a lot to support it. This year saw the implementation of protected bike lanes downtown, and an expansion of the bike routes overall. The world is looking rosier — and by that, I mean a little less intimidating — for bikes in traffic. Just remember that those traffic signs and signals refer to you, too, ten-speed. 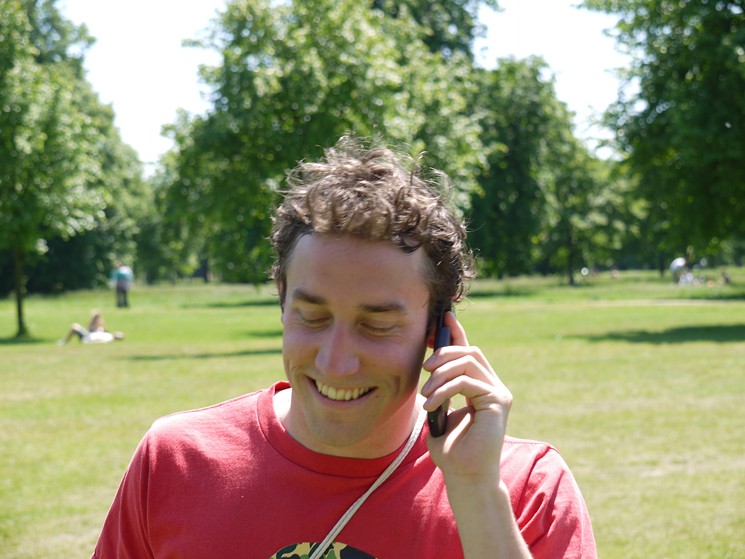 "Yeah, I'm calling from winter in Denver. Just letting you know that we're all screwed."
Neil Taylor at Flickr
7. Less snow, more heat
September was warm. So was October. November was among the warmest on record in Denver, with no real measurable snow at all, and December doesn’t look to be much better. The snow might come in 2018, but are we seeing a trend that’s going to seriously (and negatively) affect tourism in the long term? Maybe Colorado can convince the world that while we might not have much snow for skiing anymore, rolling downhill is pretty fun.

That's peanut butter in the middle. You're welcome.
Aaron Gustafson at Flickr
6. We’re getting fatter
Speaking of rolling down hills...we’re getting a lot better at it, because we’re a little rounder than we used to be. Colorado might boast the lowest obesity rate in the nation, but that’s a low bar — in this case, “lowest rate of obesity” translates to more than one in five people registering as obese, and the rate is climbing. I blame Voodoo Doughnut.

These houses are going for one meeelion dollars.
Daniel X. O'Neil at Flickr
5. Housing market stabilizing
Or is it cooling? Taking a short respite? Is the bubble about to burst? Or is there no bubble? Everyone’s got an opinion on where the housing market is going, but the fact is that in 2017, the market took a deep breath and collected itself a little. Inventory was down, purchases were steady, and prices actually dipped in September for the first time in a while. Rents are getting a little better, too, but not after an increase so ridiculous that it serves as a strong reminder that "better" is a relative term when you're spending close to $1,500 for a one-bedroom.