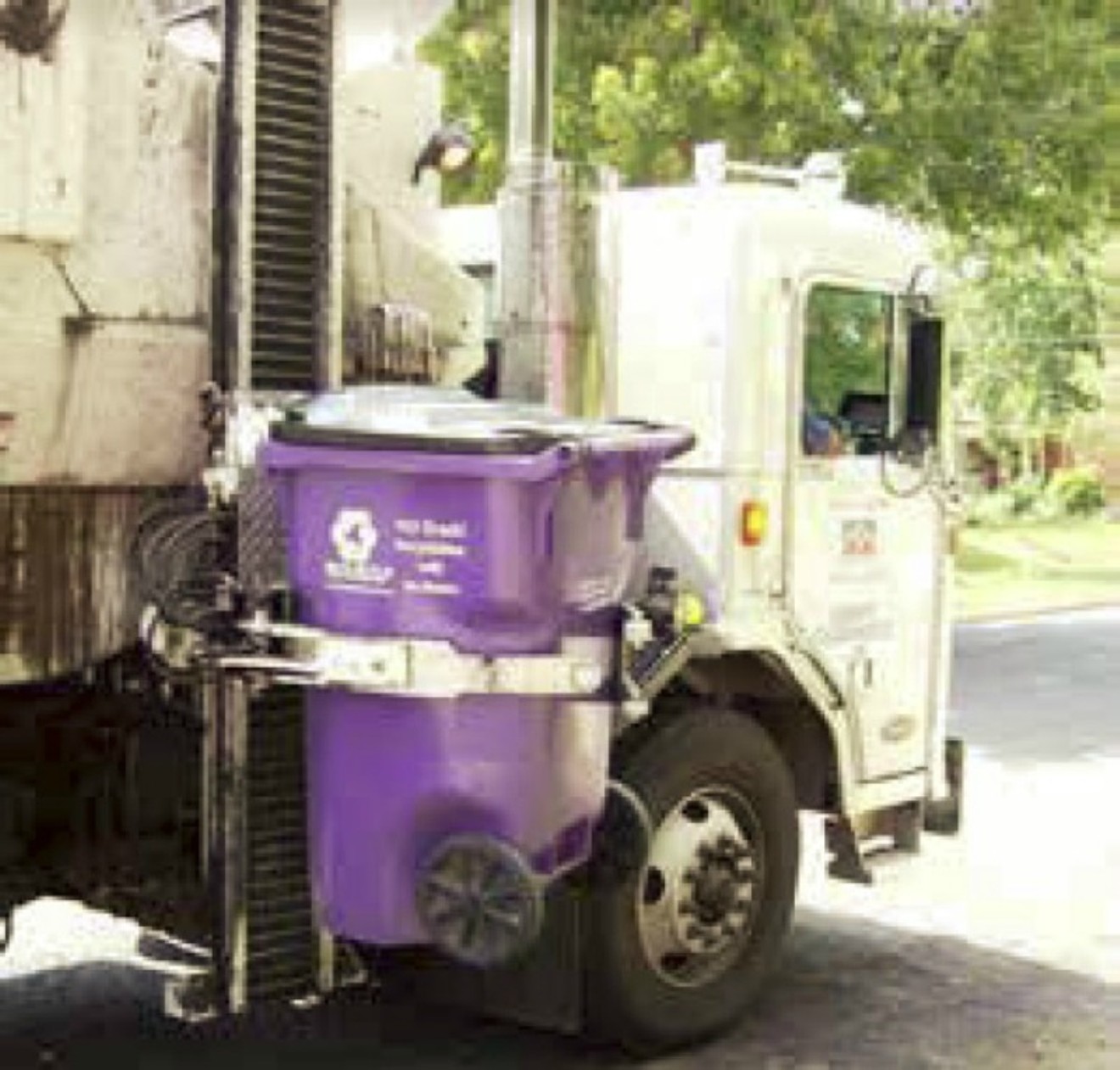 Eco-Cycle hopes more waste is recycled in the coming years. Eco-Cycle courtesy of Denver Recycles
Denver wants to stop wasting time over waste. Since 2010, city agencies have been working toward an expanded waste-service program, sometimes referred to as Pay as You Throw, in which residents would pay for the size of trash can they want and get weekly recycling pickup and compost bins as part of the deal. Now that proposal could go before Denver City Council as early as next month.

Nancy Kuhn, marketing communications manager for the Denver Department of Transportation and Infrastructure, says that the proposed program got its start in the city's 2010 Solid Waste Management Master Plan. Since then, DOTI has standardized Denver’s waste collection services by eliminating dumpsters and moving to a cart-based system; it also developed a new billing system that would make the new program possible.

DOTI teamed up with the Office of Climate Action, Sustainability and Resiliency to conduct community outreach about the plan. “We’ve presented at more than fifty meetings reaching more than 1,000 residents, with a focus on hearing from communities of color, older adults, multi-generational households, renters and low-income households to understand how to best shape this proposal,” Kuhn notes. “We’ll continue to make presentations to neighborhood groups as requested, and, if Denver City Council approves the proposal, DOTI is planning additional outreach to residents via direct mail and contracted work with community-based organizations.”

The Pay as You Throw program is just one component of the Sustainable Resource Management Plan, an update of the 2010 Solid Waste Management Master Plan, which was released on March 19. CASR, DOTI and the Denver Department of Public Health and Environment collaborated on the update; they'd originally targeted a 2020 release, ten years after the original came out, but the pandemic postponed it until this year.

"It's a big leap from here to there in just five years, but we have plans for policies in the works that will help us get there," Rink says.

Denver isn't the best at recycling and composting.
Chalabala/iStock
Denver residents only divert 26 percent of their waste, while Boulder and Loveland are both at over 50 percent. According to DOTI, 50 percent of what currently goes in people’s trash cans is compostable and 25 percent is recyclable.

The city will also complete a Comprehensive Infrastructure Needs Assessment to be sure it has the capacity to support increased recycling and composting. “We have to take a look and see what is the regional capacity to handle all this material,” Rink says. “We are one city in the Front Range, and waste management is a Front Range issue, and so that would help us band together with other cities and other counties in this area to say, ‘Okay, here are the needs that we have to better manage our waste, and let's figure out collaboratively how we make that happen.’”

On April 18, Eco-Cycle, a Boulder County nonprofit dedicated to zero waste, organized a rally in front of the Denver City and County Building to advocate for expanded waste services; Eco-Cycle representatives than talked to councilmembers at their meeting. Eco-Cycle campaign coordinator Ryan Call says that Earth Week is the perfect time to draw attention to the city's expanded waste-services proposal as a climate solution. Diverting waste helps the climate, he notes, because waste in landfills creates methane gas.

“Organic material, like food scraps or yard waste, that breaks down in the landfill doesn't have the oxygen to properly decompose,” Call explains. “Unlike composting, where if you divert your food waste and yard waste and even paper towels — anything that's formerly living can be properly composted — that compost could be used to help soil quality, which helps grow more nutritious food, and it also sequesters carbon out of the atmosphere.”

The Sustainable Resource Management Plan estimates that achieving a 50 percent diversion rate would reduce greenhouse gases by 3 million metric tons of carbon dioxide, which is equivalent to taking 600,000 cars off the road.

But not everyone is behind the plan. Councilwoman Candi CdeBaca says that she doesn't think Pay as You Throw should be a city priority right now, partly because so many residents are already struggling to afford the cost of living.

“I think that we should absolutely be making composting free and increasing recycling pickup,” CdeBaca says. “I do not think it is the right time, or the right policy, to charge people to throw trash. We've got incredible issues with trash across the city over the last decade. We've seen our city become much dirtier because there are less public receptacles for trash. ... It's not a policy that is going to yield the outcomes that we're hoping for, which is protecting the climate. It's not going to curb people's waste-generating behaviors. It's going to put an unnecessary burden on people who are hanging on by a thread right now.”

According to Kuhn, if people don't pay their trash bills, a lien will be placed on their property; that's another concern for CdeBaca.

Currently the city uses dollars from the general fund to pay for trash services for single-family homes or residences with eight units or fewer. According to DOTI, that means about 180,000 households, or two-thirds of Denver residences, receive services. All other buildings contract with private providers for waste hauling.

“With this policy instead of using taxpayer money, we're creating a separate fund,” Call says. “Only people who use the service will pay into it, just like water or electricity.”

CdeBaca also wonders about the focus on residential waste when construction and demolition debris and industrial and commercial waste make up much larger portions. According to the Sustainable Resource Management Plan, construction and demolition account for 36 percent of the city's waste; industrial and commercial waste make up 46 percent; and residential waste totals 18 percent.

“Let's say that there's a large building that's being torn down that's going to be replaced with a new building,” Rink says. “All of that waste, right now, is allowed to go to the landfill, but if we were to have a [construction and demolition] recycling requirement…let's say we set it at 50 percent. That would mean that 50 percent of the material from that construction project actually needs to be recycled, and there's a big market for that.” For example, Rink says, stone and brick can be crushed to become aggregate for sewage and road projects, and steel is infinitely recyclable.

Colorado residents will have the option to call even earlier for such recycling requirements when the Waste No More initiative, pushed by several environmental groups in the state, appears on the November ballot. The measure would require all businesses to provide composting and recycling services, mandate that construction waste is disposed of properly, and dictate recycling and composting at large events.

If Waste No More passes, every residence would have access to on-site recycling and organic material diversion by 2024. And by 2025, food waste producers, including restaurants and other businesses, would have on-site recycling and organic material diversion; they would be responsible for their own implementation. “All construction and demolition activities subject to city permit should separate and recycle, at a minimum, all readily-recyclable concrete, asphalt, clean wood, scrap metal and corrugated cardboard,” the measure continues.

Call says Eco-Cycle is pushing both the expanded waste services policy and the Waste No More ballot measure because they would work in tandem to meet waste-diversion goals.

Waste management is one way that everyone can be part of the climate solution, suggests Rink: “We can make different choices about the materials that we buy and whether or not we have to throw things away...or deciding, can this item be recycled? And I'd say the same thing for business.”
KEEP WESTWORD FREE... Since we started Westword, it has been defined as the free, independent voice of Denver, and we'd like to keep it that way. With local media under siege, it's more important than ever for us to rally support behind funding our local journalism. You can help by participating in our "I Support" program, allowing us to keep offering readers access to our incisive coverage of local news, food and culture with no paywalls.
Make a one-time donation today for as little as $1.