Obeid Kaifo multi-tasking at the Shish Kabab Grill. Mark Manger
Since the election of President Donald Trump in November 2016, there has been an uptick in hate crimes across the nation. Denver is no exception, with some notable examples:

Eight days after the election, on November 16, a transgender woman in Capitol Hill found her car spray-painted with swastikas and the words “Trump,” “Die” and “Tranny.” Three days later, more swastikas were found painted on the campus of the Isabella Community School in Stapleton. And more recently, on May 2, hateful messages, including “KKK,” were scratched into cars near the University of Denver.

Prior to this week, Denver did not have a law on the books allowing the city to prosecute such acts as hate crimes.

That changed on Monday night, May 22, when the Denver City Council approved a comprehensive bill that reforms the sentencing structure for low-level offenses. It not only addresses “bias motivated offenses” (hate crimes), but also adds protections against deportation for immigrants who commit low-level offenses by reducing their maximum jail sentences to 364 days rather than 365 days (at which point ICE is automatically notified, which could lead to deportation proceedings).

Denver City Attorney Kristin Bronson says that adding the hate-crime element to Denver's sentencing laws was partly a response to a call to action issued on March 20 by the U.S. Commission on Civil Rights.

“In recent weeks, many serious hate crimes have been reported around the country,” the letter stated. “The U.S. Commission on Civil Rights is deeply concerned about such attacks. We call on state and federal officials to respond immediately and effectively to end violence based on religion, national origin, race or other identity status.”

City Attorney Kristin Bronson
Courtesy City of Denver
Denver's sentencing laws differ from those of the state, which has a hate-crime law on the books that state prosecutors can employ during sentencing.

Similar to the state's law, Denver's sentencing provision dictates that the “hate crime” tag can be applied, when proven by prosecutors, on top of another offense — such as an assault or property damage — as a “sentencing enhancer.” This means that for low-level crimes, sentences could be increased to the city's maximum of one year in jail and a $999 fine if city prosecutors can show that the crime was directed against a class of individuals.

Bronson gives the example of spray-painted swastikas. “Before, our municipal ordinances would have found that as only a property crime," she says. “Our new hate-crime ordinance adds a sentencing enhancer when the crime is motivated against a person or their property because of their race, religion, age, mental or physical disability, gender, sexual orientation or gender identity."

“Prosecutors have the burden of proving that,” she added.

For Obeid Kaifo, the new sentencing laws are a welcome development.

Kaifo is a national boardmember of the Syrian American Council and had participated in a stakeholder meeting at the mayor's office concerning crimes and harassment directed toward Denver's Muslim community, including at schools and on social media. Kaifo says that he and his family members, who own and operate the Shish Kabab Grill across the street from the State Capitol, have been increasingly harassed during the past couple of years, and especially since the election of Donald Trump.

Obeid (left) with family members Omar, Miriam and Zeid inside their restaurant.
Mark Manger
"A lot of people say, 'Don't let the haters get to you,'” says Kaifo. “That's true to a certain extent, but that extent ends when your family members's lives are on the line."

Kaifo says that he and his family have been the recipients of multiple death threats. That includes instances in late March when an unidentified caller was phoning the restaurant twenty to thirty times a day, sometimes saying things like, “I'm going to come in there and kill you Muslims,” sometimes not saying anything at all. The calls only stopped when police were able to track down the caller.

"It wasn't out of the norm, unfortunately,” says Kaifo. “There is truly a new normal now, and it's really scary." 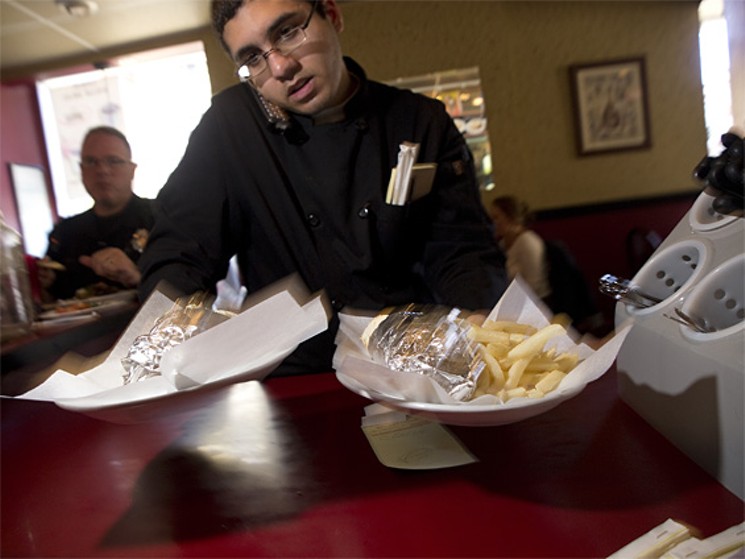 “We hope that this will act as a deterrent to those in our community that seek to harass or bully or target for crimes some of our more vulnerable population,” she says. “We're trying to be a welcoming and inclusive city, so part of this is sending the message not only that we will punish you up to the highest extent permissible under municipal law for hate crimes, but also to our immigrant and refugee communities that we have their backs.”

Bronson also adds that the law has been carefully crafted so that it won't curb free speech, which was an initial concern of Denver City Council members.

“We made it very clear that we structured this ordinance in a way that we are not punishing speech,” says Bronson. “This really is about having a sentencing enhancer for crimes that have nothing to do with the speech element, but [a crime] that, while directed at an individual, is really targeted toward a community and is meant to, and does, harm that community.”

Kaifo says he appreciates that the city is stepping up to protect people like his family.

"We cannot be timid about how we approach hate crimes," he says.