We see all kinds of fun weather around here — snow, heat, hail, even the odd tornado — but more than anything, we see plenty of sunshine. Colorado's capital city gets 300 days of it every year, or so Denver boosters say.

The 300 annual days of sunshine claim appears to extend back to at least the 1870s, when railroad companies used that forecast to lure skeptical laborers out here; Mayor Michael Hancock repeated it at the dedication of the downtown Target last week and passes the information on to passengers of the terminal trains at Denver International Airport. But the claim seems overly, well, sunny.
Here's how 2017 breaks down. Last year was a drier year than usual, with only about 82 percent the average precipitation. Even with less rain and snow, the city still had 63 days when cloud cover was 80 percent or higher, based on hourly observations at DIA. But it turns out that the National Weather Service defines a day as "sunny" if cloud cover takes up an eighth of the sky or less.

If you average the last five years, Denver has had only 52.6 days annually with at least 80 percent or higher cloud cover for a full day, and none of those five years produced fewer than 300 days of at least partial sunshine. So by that metric — that you'll see at least some sunshine in a day — the 300 days of sunshine is true...sort of. 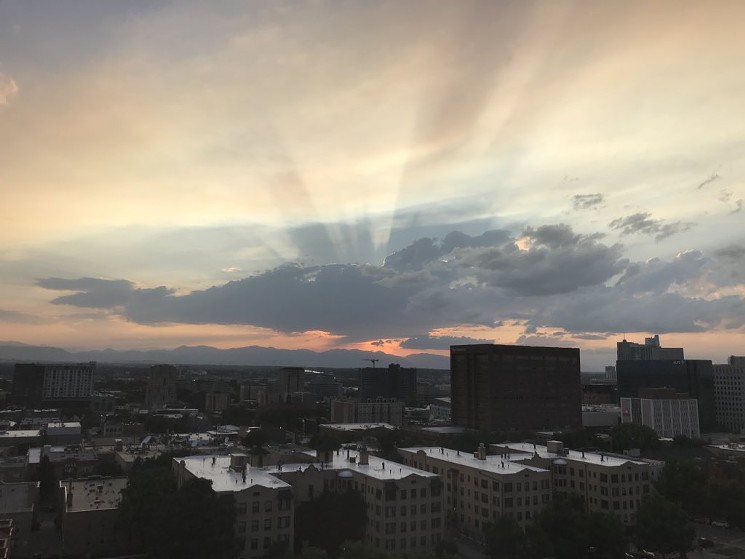 Chris Bianchi
But not if you consider a day with any rain or snow in it to be "sunny." According to the National Weather Service's official records for Denver, which extend back to 1872, an average of 86 days a year in Denver experience measurable rain or snow. That means that in an average year, around 279 days don't have any measurable rain or snowfall. Since 279 is a smaller number than 300, that pretty much eliminates the 300-days-of-sunshine claim.

So the forecast of this claim? Cloudy. If you long to just glimpse the sun, Denver will satisfy at least 300 days a year. But if you like full-on sun, then you should probably move to the Sahara Desert.

That said, Denver sees far more sunshine than most other places, and our semi-arid climate keeps us dry way more than not. If you want to feel better about the fact that we don't really get 300 days of sunshine per year, consider that Juneau, Alaska, averages 227 days of rain or snow a year. Or take Seattle's 164 wet days, or even New York City's 121 days of precipitation, and compare those with Denver's 86. Not bad, right?

We all still have way more days to bike to work, get a tan on or just enjoy a nice hike than almost everyone else in the country. But the next time someone tells you that Denver gets 300 days of sunshine a year, you can tell them that they can (mostly) shove that claim where the sun don't shine.
KEEP WESTWORD FREE... Since we started Westword, it has been defined as the free, independent voice of Denver, and we'd like to keep it that way. With local media under siege, it's more important than ever for us to rally support behind funding our local journalism. You can help by participating in our "I Support" program, allowing us to keep offering readers access to our incisive coverage of local news, food and culture with no paywalls.
Make a one-time donation today for as little as $1.