What's In a Name? Ask These Three Hot Denver Neighborhoods

Denver is suddenly stuck on nicknames. Developers are smacking hip labels on once-dowdy parts of town; the Colorado-born creators of South Park are smacking those developers with SoDoSoPa mockeries. And there’s plenty to mock: a failed attempt to rename Five Points FiDo; the increasingly apt SoBro, the charming if completely unofficial SoHam, for Denver residents sliding into suburbia.

So far, though, only three neighborhood nicknames have passed any test of time. The first was LoDo, and the man responsible for starting the name game? Author Dick Kreck, who was a columnist for the Denver Post in the early ’80s when his then-wife called one day from New York, where she was attending Columbia University. “She said, ‘You know, one of the cool things about New York is all the different neighborhood names,’” Kreck recalls. Among the names she mentioned was “SoHo,” which New Yorkers use for “south of Houston Street.”

“Wouldn’t it be cool if we got something like that in Denver?” she asked. “How about ‘area below Wazee?’”

“I said, ‘No, that doesn’t work,’” Kreck remembers. “So then I got to thinking about lower downtown, and I shortened it to ‘LoDo’ and put it in a column in September of 1983. I didn’t think I was a great genius for thinking of it, but now I wish I had patented it.”

Four founders of the Wynkoop Brewing Company in LoDo. Does the one on the left look familiar?
courtesy kim allen, denverphotoarchives.com.
The LoDo label had stuck for good by March 1988, when Denver City Council passed a zoning ordinance that gave the neighborhood historic designation and officially changed its name to the Lower Downtown Historic District. That guaranteed the area would actually keep some history; the Victorian-era warehouses and storefronts that lined the streets could not be demolished without city permission, unlike so many of the downtown buildings wiped away by the Denver Urban Renewal Authority in the ’60s and ’70s. One of those buildings at 18th and Wynkoop streets was already in the process of turning into Colorado’s first brewpub: the Wynkoop Brewing Company, whose founders included future governor John Hickenlooper. And soon other entrepreneurs were venturing into the area that had pretty much been a vast wasteland just a few years earlier.

But few people called the neighborhood by the official Lower Downtown Historic District name; by now, it was just LoDo. In fact, the organization set up to oversee those 23 blocks was itself named the LoDo District Inc.

LoDo has actual boundaries: from the alley between Market and Larimer streets to Wewatta Street (with a bite out of the district so that Union Station is not included), 14th to 20th streets. But as LoDo started gaining in popularity — and marketability — the nickname was applied to areas far beyond the borders of lower downtown.

When Coors Field opened for play in April 1995, people often said it was in LoDo — even though its home is labeled Five Points on city maps and the Ballpark neighborhood was organizing its own historic district. Businesses up the mall started stretching the LoDo boundaries, too, in order to make their places more appealing. But today, LoDo pretty much stays within the lines. And that’s because even more marketable nicknames have caught on over the past twenty years.

Little Man Ice Cream is a landmark in LoHi.
Danielle Lirette
After the success of LoDo, many other nearby neighborhoods tried on new monikers for size, including NoDo, in the then-down-and-out area just northeast of LoDo. But none really caught on until the old Olinger mortuary was redeveloped in Highland in the early 2000s, and Dave Query’s Big Red F group moved the popular Lola restaurant from Platt Park to this still-sleepy area on the bluff overlooking downtown. From there, the story gets as foggy as your brain after a night of Lola’s margaritas, but here’s the version we’re going with.

“I was always checking in,” says Paul Tamburello, who redeveloped the Olinger property and signed the lease with Big Red F. “One day Dave said, ‘Dude, we’ve got to do something down here; every time we tell people our restaurant is in Highland, they go to Highland Square.” And that development on West 32nd Avenue was miles away from the corner of 16th and Boulder streets, which is right on the lower edge of what had once been the actual town of Highland.

“It kept going on and on and on, and we started brainstorming names,” Tamburello remembers. “We kicked around a bunch of names and started calling it the LoHi Marketplace.”

The name just applied to the Olinger complex. But no more than a month later, Tamburello heard that a realtor had used the term “LoHi” in an ad. Then it showed up in more ads, and on businesses in the area. “We never branded it, it took off so fast,” Tamburello says. “Next thing you know, we’re in LoHi.”

The next thing Denver knew, LoHi was booming; the number of restaurants and bars in the area doubled in just a few years, then tripled; Tamburello added his own Little Man Ice Cream to the LoHi Marketplace and redeveloped another Olinger building that today includes Linger as well as retail shops. And the boom in what’s now almost universally, if unofficially, known as LoHi isn’t about to go bust. 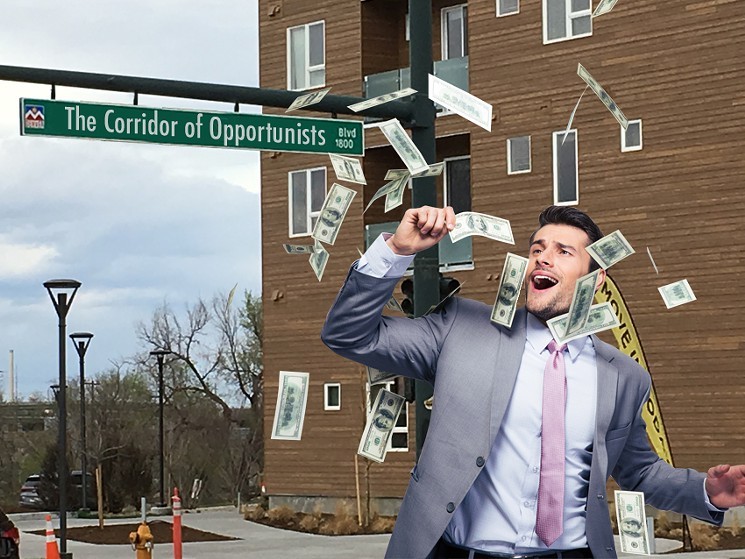 The area now known as RiNo has become a land of opportunity — and opportunists.
Westword Illustration/Getty Images
Denver’s white-hot real-estate market keeps burning through previous records and boundaries, scorching feelings and facts along the way. And memories of Denver a generation ago, a decade ago, a year ago, wind up tossed in the dustbin of history.

As you drive along Brighton Boulevard (very slowly, given the construction), it’s almost impossible to believe that Denver entered this millennium without RiNo. The area heading out of LoDo to I-70 was generally referred to as the old warehouse district or the train yards or sometimes Upper Larimer, though technically, city maps labeled everything to the Platte River simply an extension of Five Points.

Then in 2003, the city issued its River North Plan, covering the area “northeast of downtown Denver between Park Avenue West and Interstate 70 and its interchange with Brighton Boulevard,” an area “with enormous potential to create a unique community that will take its position among Denver’s great places.” The boundaries included the old Denargo Market, empty lots and industrial warehouses, as well as some savvy artists who’d already established studios in storefronts and other old buildings. Chief among them were Tracy Weil and Jill Hadley Hooper, who took note of the River North plan. “It helped put us on the map,” Weil remembers, but there was a River North in Chicago, and they thought the neighborhood could use a better nickname. RiNo, maybe. “We went with a standard acronym,” he recalls. “There wasn’t any brain damage.”

But there was a real opportunity to brand the area with an animal. The Scientific and Cultural Facilities District had found great success with a polar bear, so why not a rhino? “How cool would that be?” Weil remembers thinking. After all, a rhino was kind of like the area itself a dozen years ago: gritty, rough around the edges.

RiNo Art District
So Hadley Hooper created a rhino logo, and the pair drew a boundary around all of the art locations they knew in the area in order to form the nonprofit RiNo Art District in 2005.They trademarked the name, and “it just took off from there,” Weil remembers. And how. The district planned the first studio tour of artists working in RiNo in January 2006, “and all of a sudden, traffic on the website was going crazy,” Weil says. That wasn’t because Denver’s RiNo had suddenly become as popular as it is today, though. No, a prominent writer on the East Coast had done a story on Republicans in Name Only, and linked to the RiNo Art District site. The writer fixed the link...and started promoting actual RiNo events.

There were soon plenty of them, because over the years, RiNo leaders have just gotten more savvy; as the RiNo Art District celebrated its tenth anniversary in 2005, they were already setting up a Business Improvement District to continue improving the area while still “keeping RiNo wild.” With well-heeled developers now laying claim to so much of the land that was once occupied by on-the-cheap entrepreneurs, and businesses blurring boundaries by using the RiNo name on places far from the original area, the task has only gotten trickier. But this RiNo, which will hold its annual meeting from 4 to 7 p.m. on Thursday, April 13, at Blanc, has a tough, protective hide.

And a name worth protecting.