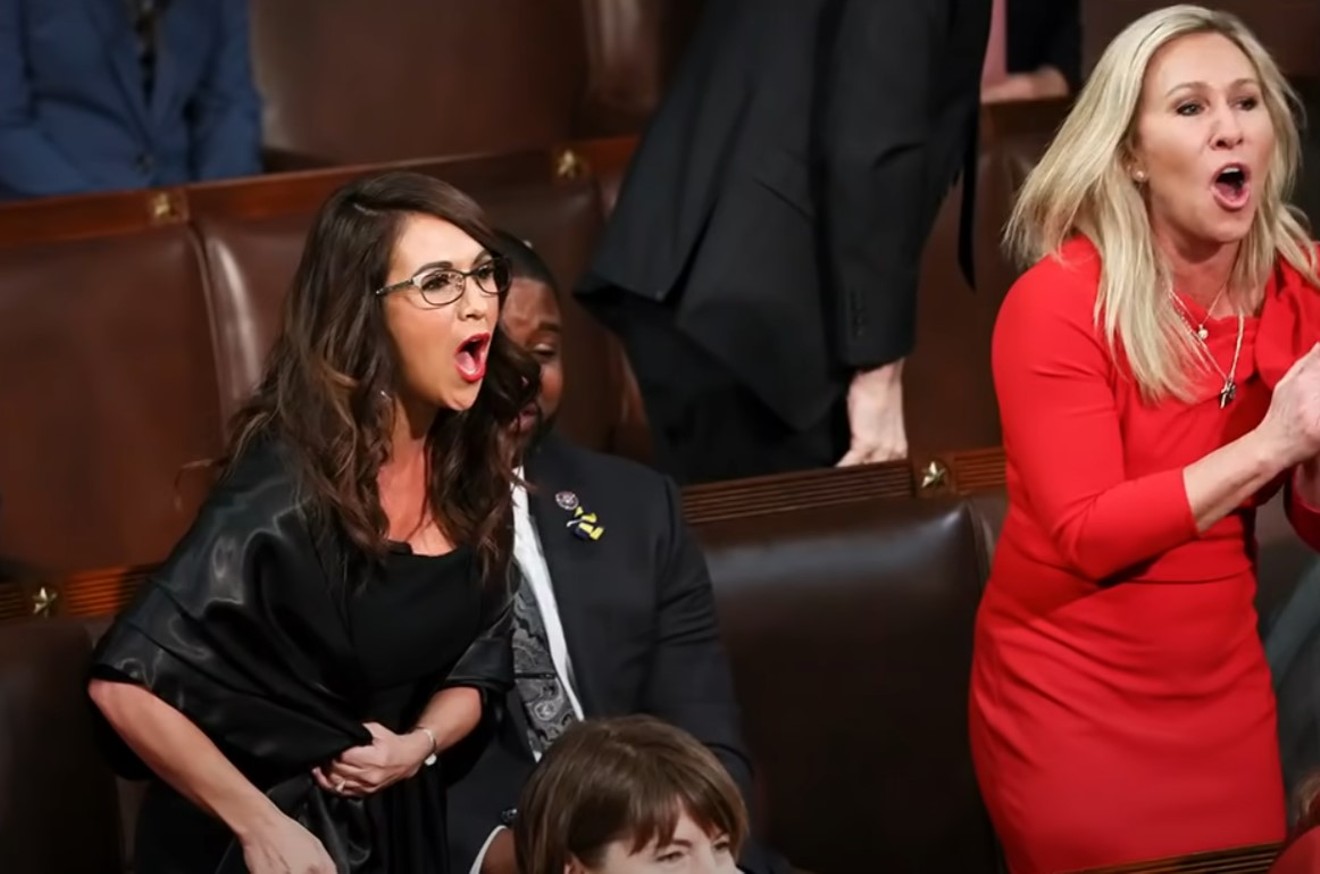 When people who peaked in high school somehow get into elected office — that's when we get heckling at the SOTU. YouTube
At first blush, it’s easy to lump Colorado’s 3rd Congressional shame right in with Georgia’s 14th;  representatives Lauren Boebert and Marjorie Taylor Greene appear pretty similar. They both genuflect at the big orange altar of MAGA, and neither is above the vociferous defense of an utterly inaccurate position. They seem to live to incite, not to legislate; they mistake abject belligerence for strong advocacy. They even looked like two of the Plastics from Mean Girls at the 2022 State of the Union, heckling the President of the United States side by side, their only apparent division over who got to be Regina George.

But all is not peaceful on the gun-totin’ ranch that is the House Freedom Caucus, popular among far-right, rabble-rousing windbags such as Jim Jordan (4th, Ohio), Paul Gosar (4th, Arizona), Madison Cawthorn (11th, North Carolina) Louie Gohmert (1st, Texas) and Matt Gaetz (1st, Florida). Boebert and MTG are two of its most notable members, and Politico broke the news last week that the two are not always on the same extremist page.

Boebert “detests being tied to her Georgia colleague,” according to Politico, though exactly why remains something of a mystery. Their most recent fallout involved MTG’s February appearance at an event organized by “known white nationalist” Nick Fuentes at which speakers praised both Hitler and Vladimir Putin, called for the execution of Dr. Anthony Fauci, and openly pushed the “Great Replacement” racist conspiracy theory. At a Freedom Caucus gathering in March, one onlooker feared the Greene-Boebert back-and-forth over that appearance "might escalate beyond the verbal cage match," Politico reports. The rancor on Boebert’s part was somewhat surprising, given that she herself has been tied to white nationalism and violence as a solution to political differences in previous years. She's asked the paramilitary Three Percenters to provide security at her rallies, and has appeared at events alongside members of the Proud Boys. Her original campaign manager, Sherronna Bishop, is even on record as saying “Thank God for the Proud Boys.”

On the surface, Boebert and MTG seem so well matched, such perfect twin nightmares of contemporary GOP politics. But scratch the surface in a catfight, and you find some real differences, such as:

1. Boebert does not yet have to claim not to recall her statements surrounding the January 6 Insurrection, including her tweet that “Today is 1776.” Greene, meanwhile, has had to go on record both in court and in public statements that she has no idea what stupid things she might have said, and probably still believes. That's because Greene's re-election campaign is currently being challenged regarding her alleged involvement in the insurrection; all Boebert has to worry about — at least so far — is the chance that more level-headed Colorado conservatives (including Don Coram, who just made the primary ballot) might call her out. 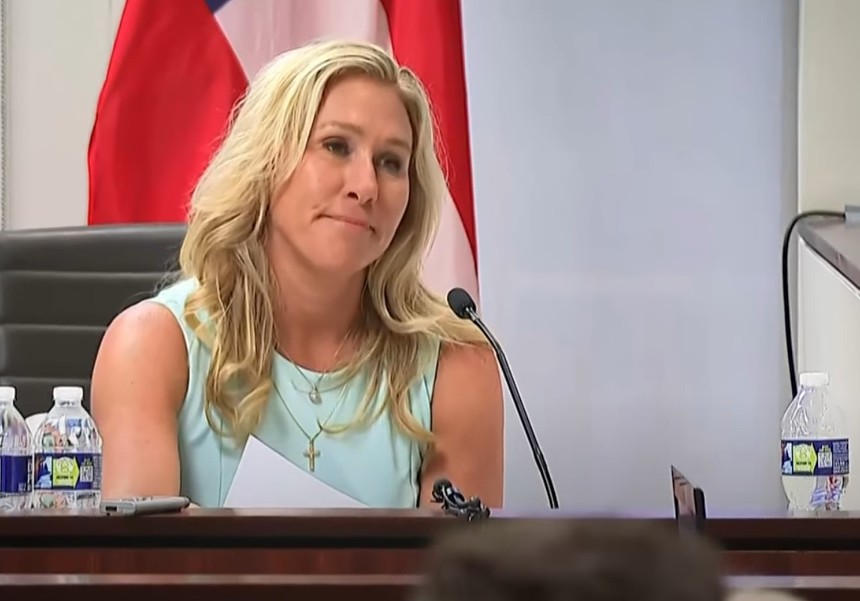 Marjorie Taylor Greene's one true skill: not remembering things.
YouTube
2. Boebert recognizes the importance of the distinction between associating with “known” and “anonymous” white supremacists. 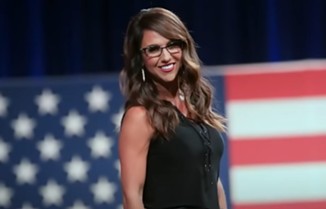 YouTube
3. Boebert seems to think she’s much hotter than MTG. She also seems to believe this is in some way important.

4. Boebert’s connection to sex scandals is more about her husband’s indecent exposure in front of teen girls at a bowling alley (an event after which she still married him). MTG, on the other hand, has had at least two marital affairs, one with a gym manager and the other with a polyamorous tantric sex guru.

5. Boebert wears glasses, perhaps in an attempt to appear more intelligent than her policies might otherwise suggest. Greene often wears sunglasses, despite this conflicting with her position on masking.

6. Greene has raffled off guns to her supporters twice: once with a sniper rifle, and again with a Honey Badger AR Pistol. (Even Tucker Carlson got in on the stunt.) Boebert prefers to stockpile her guns in her home office, and also arm her restaurant’s waitstaff, just in case someone tries the ol’ dine-and-dash after a pancake breakfast.

7.  Boebert is considered to be more of a “team player” in the House Freedom Caucus and the GOP in general. MTG is regarded as an outlier even in a very outlying group. The fact that Boebert is considered a solid contributor to any group should explain everything you need to know about that group.

8. The two would appear linked by their apparent disinterest in helping leukemia patients, since they were the only House members to vote against the reauthorization of the National Marrow Donor Program in April 2021. Still, their reasons for doing so were different brands of bullshit: Boebert’s involved something about committee process and approval from the Congressional Budget Office, while MTG suggested that “nothing in this bill prevents the funding of aborted fetal tissue by taxpayers.” Which is the sort of argument you can make about virtually anything, but pandering to the anti-choice crowd never did the GOP any harm.

9. Boebert and MTG had very different reactions to being “intentionally” left out of any campaign donations from the Value in Electing Women PAC (VIEW). “The work of Congress is not a joke or reality show,” VIEW’s executive director Julie Conway said. “We cannot let this work be erased by individuals who chose to be shameless self-promoters and carnival barkers.” MTG and Boebert are “cut from the same cloth,” she added. MTG chose to ignore the snub, but Boebert shot back. “I care about the hard-working Americans from Colorado’s Third Congressional District. ... That’s whose cloth I’m cut from,” Boebert said in a bellicose dangling preposition. 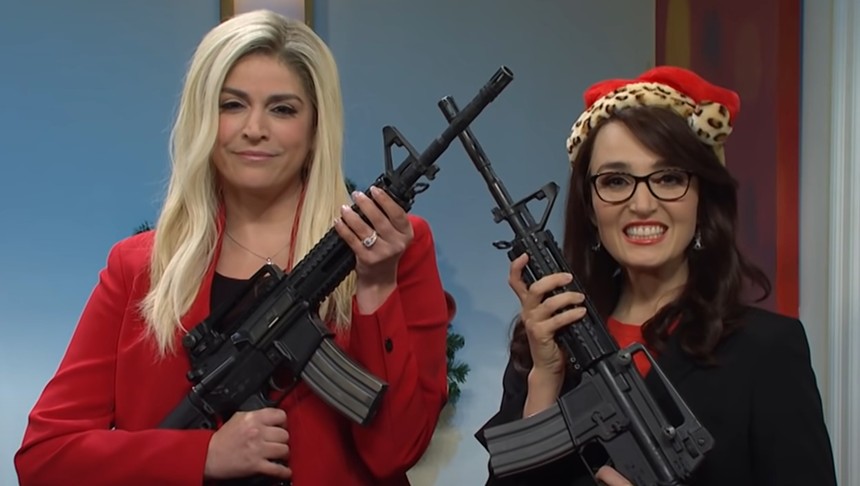 SNL parodied Marjorie Taylor Greene and Lauren Boebert last December.
YouTube
10. Neither Boebert nor MTG seems to think the other is qualified for public office, nor does either support the way the other goes about how she works for the alleged public good. Which may be the one smart thing they have in common.
KEEP WESTWORD FREE... Since we started Westword, it has been defined as the free, independent voice of Denver, and we'd like to keep it that way. With local media under siege, it's more important than ever for us to rally support behind funding our local journalism. You can help by participating in our "I Support" program, allowing us to keep offering readers access to our incisive coverage of local news, food and culture with no paywalls.
Make a one-time donation today for as little as $1.