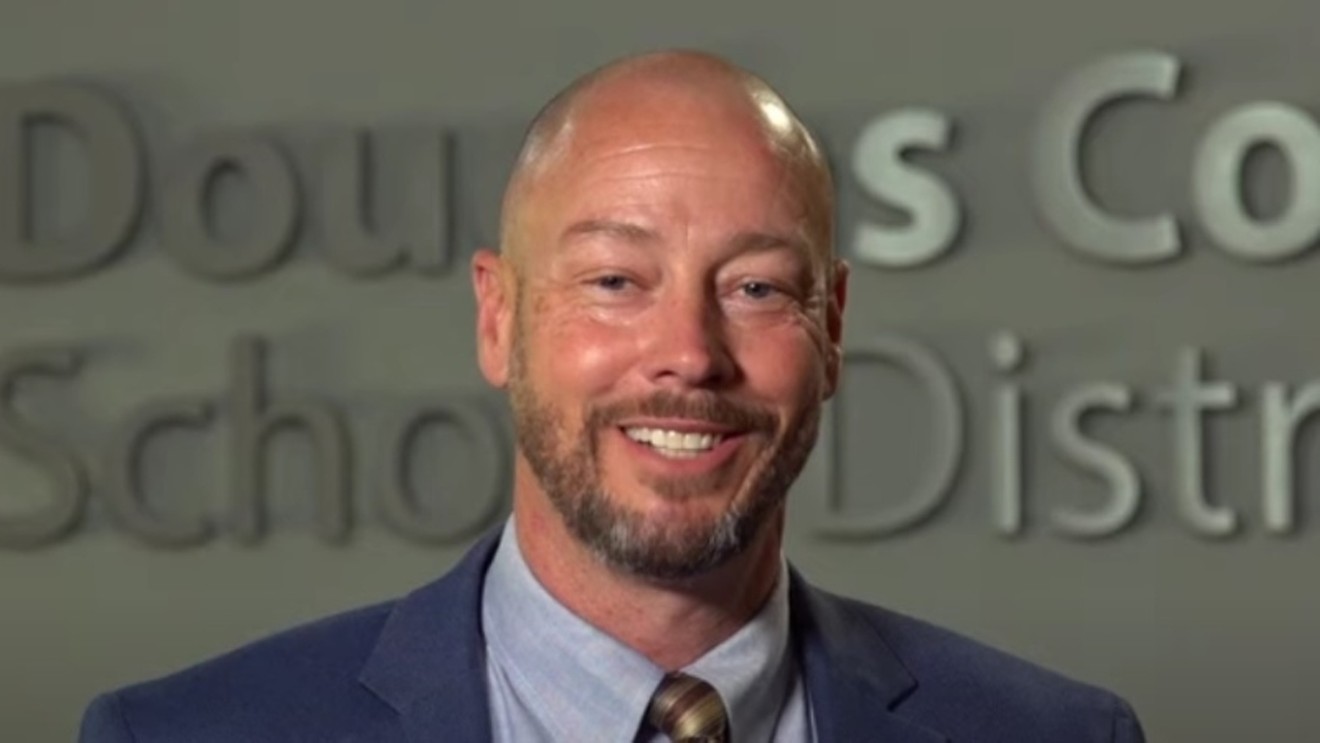 On February 3, more than 1,000 Douglas County teachers staged a sick-out to protest the prospective termination, causing classes to be canceled for the day. That afternoon, a rally in support of Wise was staged at the district's headquarters in Castle Rock. And then came the special meeting on Friday night.

Monday could prove to be very interesting for the district. Continue to see our previous coverage, including video of that Zoom call.

Original post, 6:44 a.m. February 1:
The Douglas County School Board took a decided swing to the right in last November's election. Now, the four members who represent the new conservative majority have been accused of telling Superintendent Corey Wise, a strong proponent of in-school masking rules against COVID-19 that were dumped in December, that he'd be voted out of office if he didn't resign by Wednesday, February 2.

The trio who made this claim during a highly unusual Zoom meeting yesterday, January 31, are Elizabeth Hanson, Susan Meek and David Ray, the more progressive members of the board. They said their colleague's decision to issue an ultimatum to Wise without discussing the matter with the full board violates Colorado open meeting laws.

During the session, Ray suggested that "we've got a board that's off the rails" from both a policy and a legal standpoint.

The election of Becky Myers, Mike Peterson, Christy Williams and Kaylee Winegar by Dougco voters in November had a back-to-the-future feel. Around a decade ago, the Douglas County School Board was among the most conservative in the country, thanks in part to a controversial voucher proposal that allowed parents to use taxpayer dollars to enroll their kids at religious schools. The plan prompted a lengthy court fight that wasn't resolved until December 2017, when members of the board elected the previous month over the pro-voucher faction voted to end the program.

The pandemic brought fresh pressures to bear. After the new Douglas County Health Department tried to let parents opt out of in-class masking, the school board, with Wise's support, took the issue to court and won a temporary restraining order. But anger among parents of a certain ideological persuasion kept growing, and the national media noticed. On Election Day, Fox News published a piece that tied disease demagoguery to another hot-button issue; the headline read: "Douglas County, Colorado, voters say COVID-19 protocols, critical race theory decisive factors in election."

The board's conservatives seem determined to chart a new path when it comes to racial justice; last week, they voted to alter an equity policy put in place after the 2020 George Floyd protests.

Wise, for his part, has worked in Douglas County schools for a quarter-century and served in administrative roles at Chaparral High School and Legend High School prior to being named interim superintendent in October 2020; the "interim" label was removed last April when he was officially given the superintendent job. But his role in the fight for face coverings at schools appears to have contributed to him becoming a target for Myers, Peterson, Williams and Winegar, and he's not alone. A February 1 CNN report cites a survey in which two-thirds of the country's school superintendents who responded admitted that they considered quitting during the past two years — a period when many parents' passions were inflamed by COVID-19 safety protocols.

The next full meeting of the Douglas County School Board is scheduled for February 22. Here's a video of the January 31 Zoom event co-starring Hanson, Meek and Ray, as originally shared by Living in Parker.