Eric Ashby Disappearance: "How to Get Away With Murder Legally" 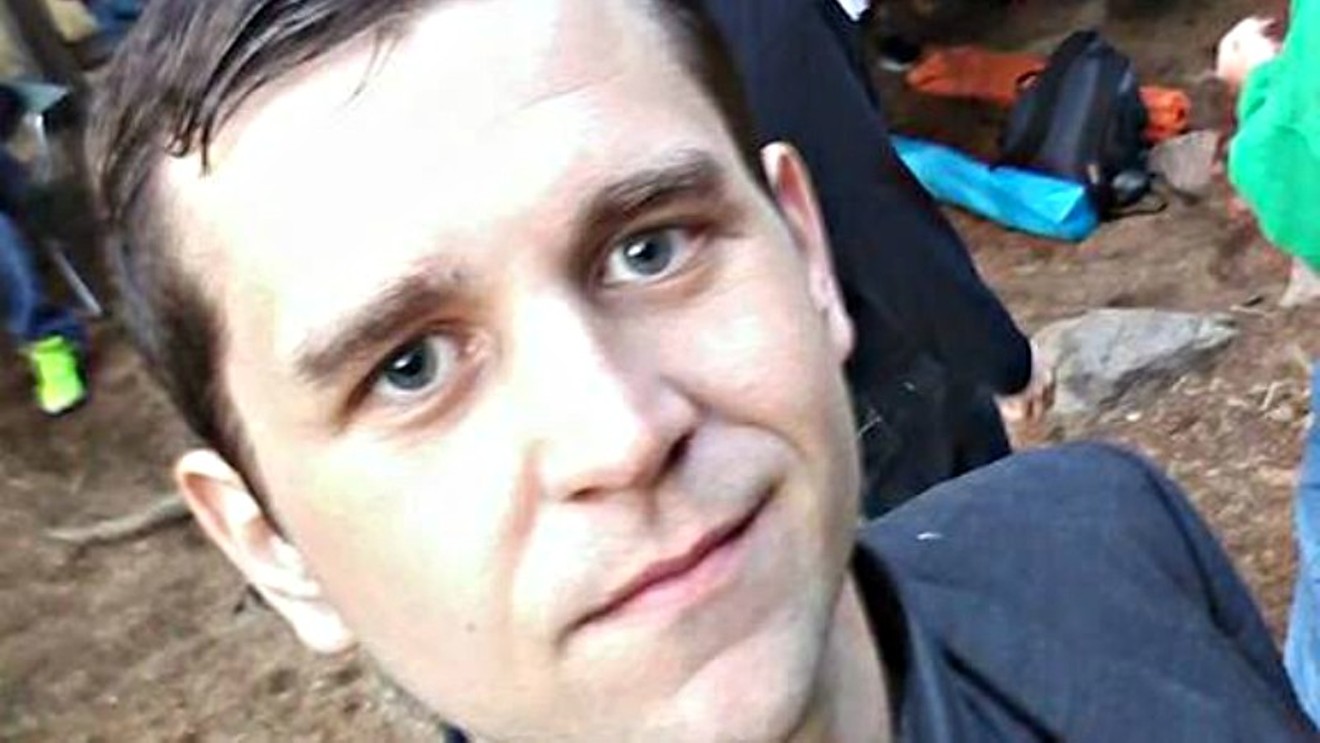 Eric Ashby, as seen in his most recent Facebook profile photo. Facebook
At this writing, human remains found in Fremont County have yet to be officially identified as those of Eric Ashby, who vanished on June 28 while searching for a $2 million treasure allegedly hidden by author Forrest Fenn. But Ashby's presumed death has inspired separate efforts to create "Eric's Law," a proposal intended to address individuals who don't try to offer assistance to those in life-threatening situations, including four people who allegedly stood idly by as Ashby went under the surface of the Arkansas River for the last time.

"This isn't just for Eric," says Tennessee-based Allison Bennett, who created one of two petitions on Change.org promoting the Eric's Law concept; both are accessible below. "This is for anybody else this has happened to. There are people who've died because someone didn't make one simple 911 call, and that disgusts me."

The type of legislation Bennett is promoting is known as a duty-to-rescue law, which requires folks who witness a person in peril to seek aid or notify law enforcement if certain conditions are met. Right now, ten states have measures on the books that generally fit this description: California, Florida, Hawaii, Massachusetts, Minnesota, Ohio, Rhode Island, Vermont, Washington and Wisconsin.

That Colorado lacks such a rule frustrates Ashby's friends and family, who've used social media to lambaste the quartet thought to have been with him just prior to his disappearance. We're not using their names here because they haven't been accused of a crime — but one of Ashby's supporters directly blames them for his death in a widely circulated post appearing under the title "How to Get Away With Murder Legally."

Sunshine Falls on the Arkansas River, near where Eric Ashby disappeared.
YouTube file photo
"Do you know right now as the law stands there are only 10 states out of 50 that have a duty to report law in place?" the item asks. "You, your child, your parent, relative or friend can be drowning, you can be hanging on the edge of the cliff or are in the last, scariest moments of your life and your friend or a bystander can be watching and they don't even have to call 911. They can let you fight for your life, they can laugh, they can watch, and they can just stand there and let you die and no charges can be brought against them. I don't know about you, but to me, this is murder. This is the legal way to get away with murder. We can change this with Eric's Law!"

Bennett agrees. She met Ashby when he was working in a Tennessee restaurant with her cousin and two good pals, and they formed a fast friendship. "He's got a smile that could light up a room," she says. "He was very funny, very quick-witted. You could tell he was all about living life to the fullest and was a great adventurer."

When Ashby moved to Colorado, Bennett lost contact with him. Upon learning via Facebook that he was missing, she looked back on his timeline, she recalls, and found "a post from 11:44 a.m. on June 28 that said 'I hope today turns out to be the success I've hoped for. Wish me luck.'"

In Bennett's view, this was a reference to the hunt for Fenn's treasure, which has been connected to the deaths of two other Coloradans, Randy Bilyeu and Paris Wallace, since January 2016. And while some Fenn backers who've contacted Westword question whether Ashby was on the same treasure hunt when disaster struck, Bennett says she has evidence to support her belief: "Eric's sister, Lisa, went to Colorado and got his car — and in it, she found some contracts. They said that Eric would get 51 percent of the treasure and the others would get 49 percent."

New Mexico author Forrest Fenn.
CBS file photo
Ashby's companions didn't get rich as a result of these pacts, and neither did they report that he'd fallen off a raft in the Sunshine Falls area of the Arkansas and presumably drowned. The official account from the Fremont County Sheriff's Office, which was released on July 12, states that deputies received a report about a raft flipping and multiple people going into the water from another witness far from the scene, but when they reached the area, no one was there and a search didn't turn up any victims. Then, on July 8, the FCSO account continues, a family member of Ashby's called the sheriff's office to report that Eric was missing after getting into a river accident on June 28. Investigators later concluded that this incident was the same as the one cited by the aforementioned caller and launched a missing-person's case.

A month after the accident, on July 28, human remains were found in the Arkansas east of Florence. Sergeant Megan Richards, the FCSO's public-information officer, subsequently told us that the body was "unrecognizable," so dental records and/or DNA testing would likely be deployed as part of the autopsy process. That process was expected to take weeks — and it's now gone on for well over a month.

Bennett remains angry about how the sheriff's office handled the case, but she's pouring her energy into the petition. Its introduction begins: "I'm starting this petition because of my friend Eric Ashby. He has been missing since June 28th 2017 due to four friends leaving him and not calling 911. We are still looking for Eric and if these people had not left him that day he might still be with us. Not only did they leave but they did not even call 911. He had been living in Colorado for about a year and on this day had went into the Arkansas River. He was last seen by a bystander hanging onto a rock for dear life. We were not aware of anything happening to Eric until 10 days later. Therefore there was no search and rescue or anything until after family and friends realized what happened and started a group that was named Find Eric Ashby."

The petition then shifts gears: "Recently, a man in Florida, Mr. [James] Dunn, was videotaped by several teens as they laughed and watched him die," it states. "Our friend and this man could have possibly been saved if someone would have just called 911."

Another Facebook photo of Eric Ashby.
Facebook
Of course, Florida does have a duty-to-report law, but authorities there have reportedly charged the teens with a different offense: failing to report a dead body.

"Many states have already adopted this law," the petition acknowledges, "and I feel ALL STATES should. I urge you to sign this petition and think if it was your mother, brother, child etc. All we ask is that you call 911 or an emergency response team if you see a person in distress. I don't think that is too much to ask."

At this writing, Bennett's petition has collected just over 4,300 signatures toward a goal of 5,000. But she feels even more people would have signed had it not been for a competing petition created by a Coloradan named Misty Morris. That effort has collected more than 60,000 signatures, but Bennett says "it kind of screwed us for the big picture. We geared ours for all states, but hers was only geared for Colorado — and she doesn't even know Eric. So that really aggravated us."

Then again, Bennett will consider it a step in the right direction if any state passes Eric's Law. In her words, "We want to make sure his death wasn't in vain. We're hoping something positive will come out of it."