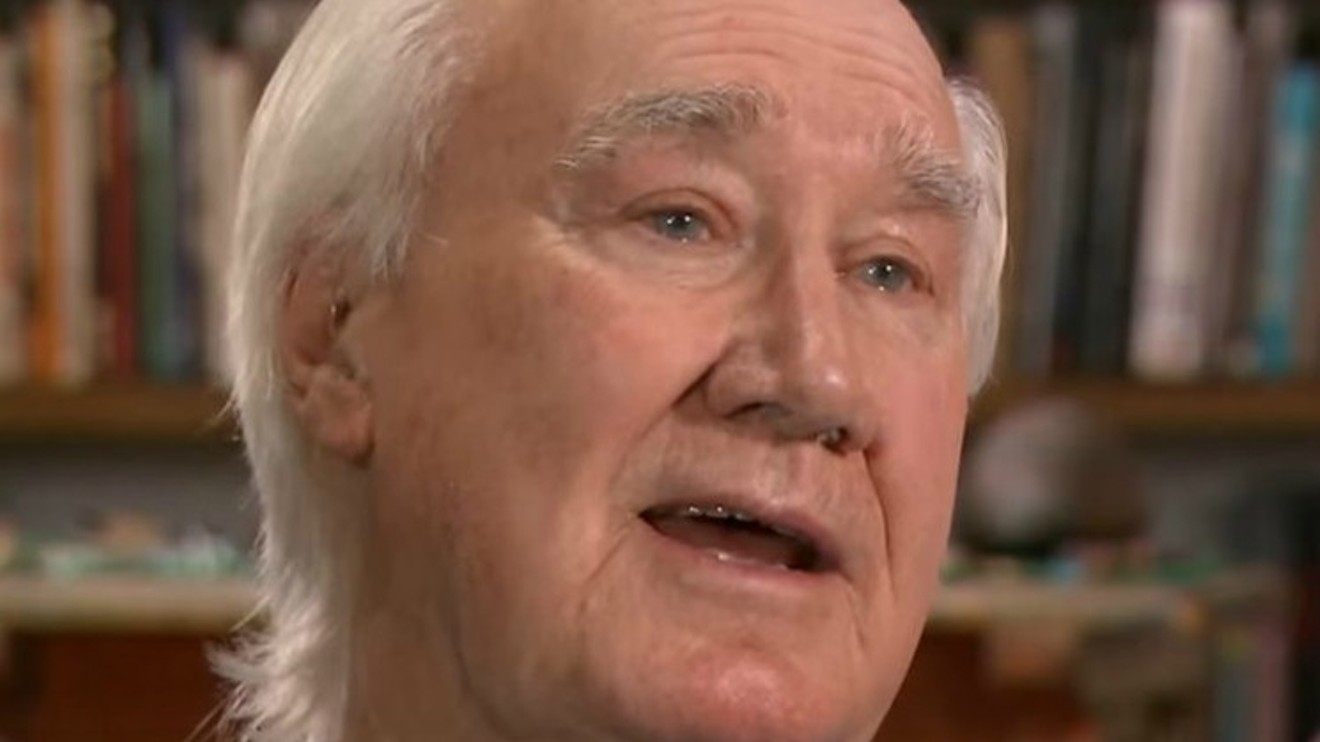 Forrest Fenn during an interview with CBS Sunday Morning. YouTube
A man identified as Michael Sexton, a 58-year-old from Deer Trail, has died hunting for a $2 million treasure said to have been hidden by New Mexico author Forrest Fenn. He's at least the fourth Coloradan to perish while seeking this windfall; the ex-wife of one victim, Broomfield's Randy Bilyeu, puts the overall death toll at six prior to Sexton's passing.

After the latest news broke, Fenn told the Denver Post, "What happened was tragic. My heart and prayers go out to the family and friends." In an email to Westword a short time ago, he said, "I don't have anything to add.... The winter Rockies can be mean and unforgiving. I feel so sorry for the family. I don't know what else to say."

On his website, Fenn, who's in his eighties, describes his 2011 memoir, The Thrill of the Chase, as "the remarkable true story of Forrest Fenn’s life and of a hidden treasure, secreted somewhere in the mountains north of Santa Fe. The book contains clues to the treasure’s location." Specifically, they're in a poem whose key stanza reads, "Begin it where warm waters halt/And take it in the canyon down/Not far, but too far to walk/Put in below the home of Brown."

In the years since he released his memoir, thousands of people have headed to New Mexico to look for the treasure, described as a $2 million cache of gold and jewels, fulfilling Fenn's goal of using lucre to tempt folks into experiencing and enjoying nature. But then, in January 2016, 54-year-old Bilyeu disappeared after heading to New Mexico to look for Fenn's riches — and that July, his body was positively identified.

In an e-mail Q&A with Westword after Bilyeu's remains were ID'd, Fenn wrote, "It is tragic that Randy was lost, and I am especially sorry for his two grown daughters." Even so, he said that Bilyeau's death didn't make him regret starting the treasure hunt: "Accidents can happen anywhere. Randy may have had a heart attack or otherwise become incapacitated."

Fenn noted that he emphasized safety for treasure hunters. "Anyone who goes into the mountains should be prepared, use a GPS and always be aware of possible dangers," he said, adding, "Many people don’t have experience hiking in the mountains, but that doesn’t mean they should stay at home. Just be careful and don’t get overextended."

Linda Bilyeu, Randy's ex-wife, wasn't reassured by these words, and branded the treasure a hoax. "Randy lost his life searching for 'nothing,'" she wrote in an email to Westword.

Then came news that Paris Wallace, a pastor from Grand Junction, had vanished in June 2017 while trying to find the treasure. His body was eventually located at Rio Grande Gorge, not far from the community of Pilar, several miles from where he'd left his car. 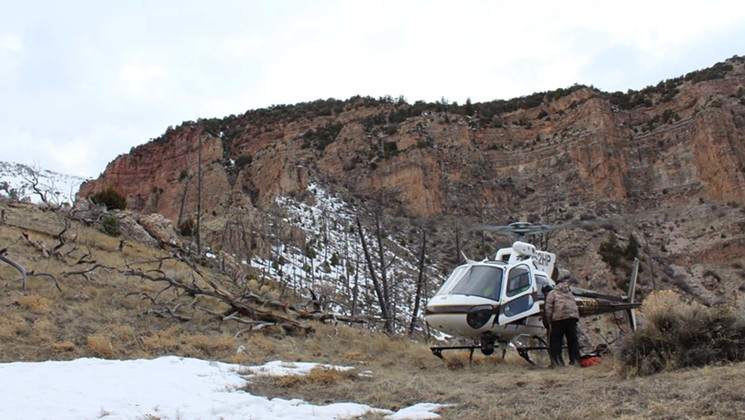 A helicopter used in the search for Michael Sexton and his companion at Dinosaur National Monument.
Moffat County Sheriff's Office
Shortly thereafter, New Mexico State Police Chief Pete Kassetas told the Santa Fe New Mexican that he believed the treasure hunt should be brought to a close. "I would implore that he stop this nonsense," Kassetas told the paper. "I think he has an obligation to retrieve his treasure if it does exist."

Kassetas's words had an impact on Fenn. "I have to respect what the chief said," he told Westword, adding that he was contemplating whether the time had come to call off the search. But in a later email exchange, he explained that he'd reached the opposite conclusion.

The chief's call "caused me to stop and think for a few days," Fenn revealed. But he also noted that of 600 e-mails he'd received after Wallace disappeared, only eight unsigned messages urged that the treasure hunt end. As a result, he said, "After a long deliberation and discussions with friends, I have decided that stopping the search would not be fair to the thousands who have searched the Rockies and gone home with wonderful memories that will last them forever. A number of family members who have been estranged for years have reunited to join in the search."

More heartbreak has followed. Eric Ashby, who'd been living in Colorado Springs when he decided to hunt for the treasure, was lost in the Arkansas River in late June 2017 when his raft flipped; his body was recovered in January 2018. Other documented victims include Jeff Schulz, who passed away in 2016, and Jeff Murphy, killed in a 500-foot fall in Yellowstone in 2017. Moreover, Linda Bilyeu told us that she's been in touch with the family of another person who died while hunting for Fenn's treasure; his loved ones decided against going public, she said.

The latest fatality took place at Dinosaur National Monument. On March 19, according to a release from the National Park Service, park rangers received an alert from the Moffat County Sheriff's Office about two missing Colorado residents who'd been snowmobiling in the Wild Mountain area along the border between Utah and Colorado.

Two days later, on March 21, the two men were located by a helicopter crew taking part in the rescue effort. Sexton was declared dead at the scene, while the second man, a thus-far-unidentified 65-year-old from Thornton, was transported to a nearby hospital.

Fenn has cautioned against searches during the winter. And in his Q&A with Westword, he acknowledged that eliminating all risk is impossible.

"There is no way to prevent accidents," he allowed. "An average of nine people lose their lives each year at the Grand Canyon. ... No one knows the dangers that lurk in the mountains more than those living in Colorado. It is important to observe the rules made by rangers and Forest Service personnel, and I am sure that subject is constantly being emphasized in your social media."

Still want to risk joining the hunt? Here are additional clues offered by Fenn: "The Treasure is hidden higher than 5,000 feet above sea level," "No need to dig up the old outhouses, the treasure is not associated with any structure," "The treasure is not in a graveyard" and "The treasure is not hidden in Idaho or Utah."
KEEP WESTWORD FREE... Since we started Westword, it has been defined as the free, independent voice of Denver, and we'd like to keep it that way. With local media under siege, it's more important than ever for us to rally support behind funding our local journalism. You can help by participating in our "I Support" program, allowing us to keep offering readers access to our incisive coverage of local news, food and culture with no paywalls.
Make a one-time donation today for as little as $1.