The Four Counties That Flipped From Trump to Polis

Polis for Colorado
Democrats swept every statewide office in November's midterm elections, clinching a so-called trifecta of power. But beyond the clean sweep, it was the margin of the Democratic victory that took observers by surprise.

For example, Jared Polis won the governor's mansion by 10.6 percent, a blowout of near-historic levels for typically purple Colorado.

We know some of the reasons that Democrats won so decisively on November 6, but where, specifically, did these huge shifts take place, at least compared to the 2016 election, when Hillary Clinton beat Donald Trump here by less than 5 percent?

The quick answer: everywhere. The slightly longer answer: maybe not quite where you'd expect.

Polis won four Colorado counties (Chaffee, Garfield, Huerfano and Pueblo) that Trump won in 2016, while Republican Walker Stapleton didn't win a single Colorado county that Clinton carried in 2016. In fact, Stapleton did worse than Trump in 63 of Colorado's 64 counties.

Contrary to what pundits might have expected, last month's lopsided results didn't happen because of a Democratic surge in metro Denver. Democrats dominated in every single corner of the state, and some of their biggest gains actually came in many of Colorado's traditionally more Republican corners.

Consider this: If you got rid of Denver County and neighboring population-rich Broomfield, Adams and Arapahoe counties' collective votes, Stapleton still would've lost.

There are two ways to compare county-level 2018 results to what we saw in 2016: One, by comparing a county's Democrat-versus-Republican vote margin. In this analysis, however, small counties will typically have larger swings than more densely populated ones, simply because it takes fewer people changing their minds to create a greater percentage shift.

So the second way to assess the differences between two elections is through the change in raw votes between Democratic and Republican candidates, where one can see where the most votes moved between one election and another.

For simplicity, we'll use the top-of-the-ticket gubernatorial race between Polis and Stapleton and compare it to the 2016 vote between Trump and Clinton. Both gubernatorial candidates were generally seen as mainstream representatives of their parties, and the race drew the most votes out of any other. 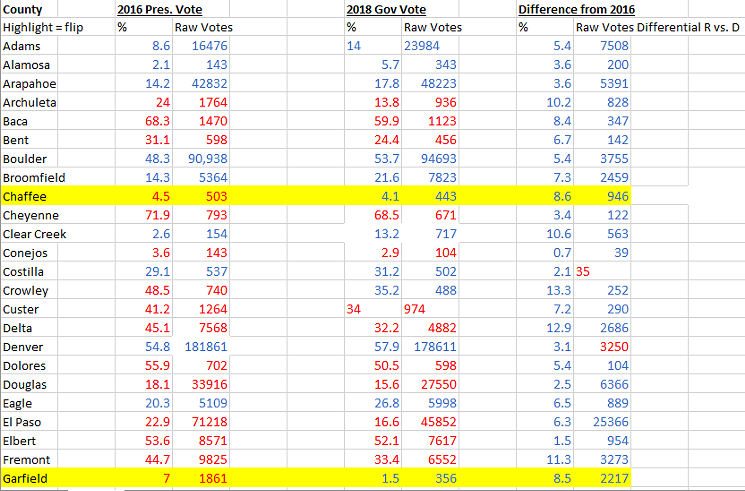 Spreadsheets are fun!The left-hand columns show the 2016 Trump/Clinton margin of victory by county and the raw vote margin, with the party winner indicated by color (blue for a Clinton/Democratic win, red for Trump/Republican). The middle two columns are the Polis/Stapleton margins. The right two columns indicate the net differential from 2016 to 2018.Highlighted county = shifted from a Trump victory to a Polis victory.
Chris Bianchi
For all the talk of the anti-Trump suburban revolt — though there was undoubtedly one, as evidenced by GOP Representative Mike Coffman's double-digit defeat in the heavily suburban 6th Congressional District — the place where Republicans probably did the worst was in the heart of their home turf: Colorado Springs. In El Paso County, the GOP lost more than 25,000 votes in this year's governor's race from their 2016 presidential performance there, by far the most of any county statewide. Polis received more raw votes in El Paso County than Clinton did in 2016, and Stapleton received nearly 25,000 fewer votes in the county than Trump did two years ago. Trump won El Paso by 22.9 percent in 2016, but Stapleton carried it by less than 17 points this year, which helped with the significant 6.3 percent Democratic shift from 2016 to 2018.

Another particularly troubling spot for Republicans came in Mesa County, another GOP stronghold and home to Grand Junction, a large Republican hub. Stapleton comfortably won here, taking Mesa by more than 25 percent. But Trump won by 36 percent in 2016, and it moved blue by more than 10 points from 2016 to 2018. A total of 10,730 votes moved in Democrats' direction here, the fourth-highest raw vote swing among Colorado's 64 counties.

Between El Paso and Mesa, it's pretty clear that Republicans didn't take care of business at home. Maybe a Trump visit would've helped after all, though the state's suburban voters made their disdain for the commander-in-chief about as obvious as a "Resist" bumper sticker.

So about the suburbs. Nationwide, the Democratic flip of the House of Representatives was heralded as a suburban revolt against Trump, and there was certainly strong evidence of that in Colorado as well, starting with Coffman's lopsided defeat in the 6th. Arapahoe (about 5,300 more Democratic votes than Republican ones, as compared to 2016), Adams (approximately 7,500 votes), Broomfield (about 2,500 votes), and longtime Colorado bellwether Jefferson County (about 17,000 votes) all moved decisively further left from 2016. Even in the GOP's main suburban stronghold, Douglas County, Democrats improved on their 2016 performance by 2.5 percent, picking up nearly 6,400 votes from the last presidential cycle.

Traditionally Democratic southern Colorado, which swung hard in Trump's direction in 2016, reverted back to its Democratic roots this year. Pueblo County, which famously voted for a Republican presidential candidate in 2016 for the first time in 44 years, backed Polis by more than 6 percent, a nearly seven-point swing from 2016.

Neighboring Huerfano County also flipped blue — by nearly 11 percent — after going red for Trump in 2016. Las Animas County in the south moved blue by 14.7 percent, the largest swing of any county in Colorado.

On their home turf, Democrats maintained or increased most of their already lopsided margins from the last presidential cycle. In Boulder County, Polis's home, the 2nd Congressional District representative built on Clinton's 2016 advantage by 5.4 percent, widening Democrats' gap by about 3,700 votes this cycle. And because of lower turnout as compared to 2016, Democrats in Denver County improved their margin of victory by about 3 percent (Republicans actually closed the gap by 3,250 votes). In the more liberal mountain towns, Democrats built on 2016 advantages, particularly in Eagle (6.5 percent Democratic shift, or about 900 votes), Gunnison (10 percent, approximately 750 votes), Routt (8.4 percent, about 1,000 votes) and Summit (9.4 percent, or about 800 votes) counties.

Every corner of the state moved blue, save for Morgan County, which moved in Republicans' direction by a whopping 0.3 percent.
KEEP WESTWORD FREE... Since we started Westword, it has been defined as the free, independent voice of Denver, and we'd like to keep it that way. With local media under siege, it's more important than ever for us to rally support behind funding our local journalism. You can help by participating in our "I Support" program, allowing us to keep offering readers access to our incisive coverage of local news, food and culture with no paywalls.
Make a one-time donation today for as little as $1.