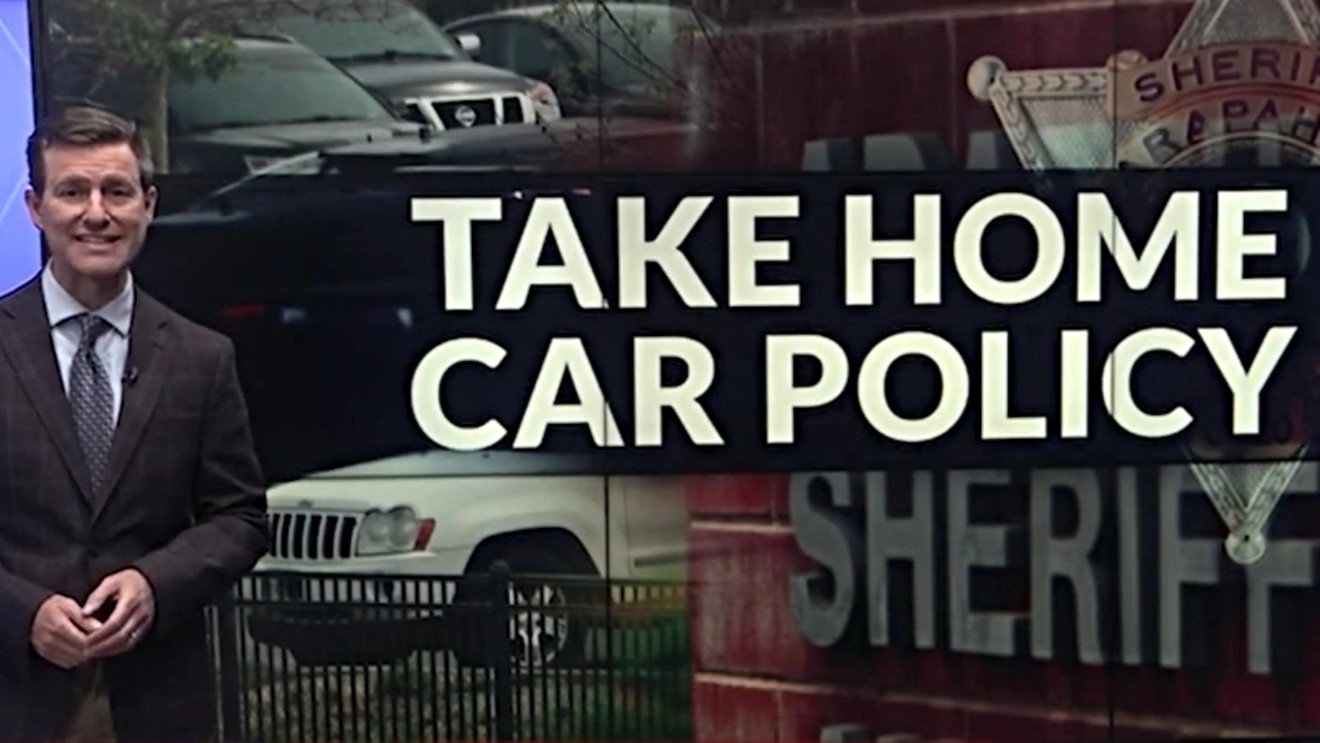 A screen capture from a May 25 Fox31 story that generated a sharp response from the Arapahoe County Sheriff's Office. Fox31
The Arapahoe County Sheriff's Office is voicing its objections to a recent Fox31 investigation in a very public way. Late yesterday afternoon, the ACSO shared a lengthy dissection of a May 25 piece focusing on the vehicle policy on its Facebook page, asserting that it contained "numerous inaccuracies" and adding that "the Sheriff’s Office does not condone misleading, speculative reporting."

In response, Fox31 news director Brian Gregory offers this statement: "We have connected with the Arapahoe Sheriff’s Office and we’re having an open dialogue with them regarding their issues with our story."

"Arapahoe Sheriff Changes Take-Home Car Policy to Benefit Violators," reported by Rob Low of Fox31's Problem Solvers team, was months in the making. "Take-home cars are a perk for lots of law enforcement agencies, just not the Arapahoe County Sheriff’s Office," it begins. "But it was the Arapahoe County Sheriff’s Office that officially changed its policy just weeks after the Problem Solvers filed a public records request based on a tip from an insider who felt the policy was being ignored by dozens within the department."

Before March, the piece asserts, "the sheriff’s office had a twenty-mile rule: Basically, take-home cars were only meant for employees who lived within twenty miles of their workplace unless the sheriff granted an exception." However, "an internal report conducted in September found that 31 out of 162 sheriff employees assigned take-home vehicles were commuting beyond twenty miles but still getting the free gas and maintenance associated with their take-home vehicles."

According to Fox31, "One of the biggest beneficiaries is the department’s number-two person, Undersheriff Mark Nicastle. The September report obtained by the Problem Solvers shows Nicastle drives 44 miles each way from his home near Brighton to sheriff headquarters in Centennial. If Nicastle drives 88 miles a day, five days a week for 48 weeks (a conservative estimate based on vacation and holidays), then he should rack up 21,168 miles. But sheriff records show he drove 33,091 miles over the most recent 12-month period tracked by the department. Records also show Nicastle received $10,772 in gas over the past three years that he didn’t have to pay for. If gas continues to sell for about $4 a gallon, Nicastle could save nearly $6,000 in gas this year based on his past usage."

Low states that "Problem Solvers asked for the department's take-home car policy on February 24," but it didn't receive a response until March 14, and the information sent "was a new policy that had been revised as of March 10."

The Arapahoe County Sheriff's Office Facebook post takes on the implications underlying this last passage in the first of six "facts" about the story: "Fox31 presented a third party to 'speculate' that the Sheriff’s Office may have changed its take-home car policy in response to their inquiries. The Sheriff’s Office had been working on revising its take-home vehicle policy since September 2021. It was submitted to our accreditation unit for final approval and signature in January 2022, one month BEFORE Fox31 ever made its request for information on February 24. The final policy was adopted on March 10, 2022. There is no relationship between Fox31's inquiry and the change in policy."


Fox31 suggested the Sheriff’s Office policy may have violated federal tax regulations. This is inaccurate. Federal tax regulations do not require use of vehicles that meet the definition of “qualified nonpersonal use vehicles” to be reported as compensation. That includes unmarked vehicles used by law enforcement officers if the use is officially authorized.

Fox31’s headline, 'Arapahoe Sheriff changes take-home car policy to benefit violators' is inaccurate. The policy allows for take-home vehicle use for individuals living more than 20 miles away with appropriate authorization. The deputies who were allowed to do so were not 'violating' the policy.

ACSO deputies are frequently called to respond to emergencies. For example in 2021, our special operations deputies alone responded to more than 360 calls. Many of the deputies with take-home vehicles are members of the SWAT Team, Bomb Squad and other special units, as well as investigations and other positions which require them to respond from home. Fox31’s suggestion that it is “rare” for deputies with take-home cars to respond to emergencies is inaccurate.

Fox31’s calculation of approximate gas costs incurred by the Sheriff’s Office is not accurate. The Sheriff’s Office does not pay $4.00 per gallon for gas as the reporter implied. Rather, the sheriff’s office pays a discounted rate of $2.91 per gallon when deputies fill up their gas tanks at our county facilities.

Lastly, the Undersheriff drives an emergency vehicle because he’s the second highest ranking officer at the agency. His position requires that he be able to respond to incidents of extreme importance, such as officer involved shootings, deputies who are injured or killed in the line of duty and mass incidents of violence. The Undersheriff also takes on the role and responsibility of the Sheriff in his absence and is expected to be available and on-call 24 hours 24 hours a day, 365 days a year.

Click to read Fox31's "Arapahoe Sheriff Changes Take-Home Car Policy to Benefit Violators."
KEEP WESTWORD FREE... Since we started Westword, it has been defined as the free, independent voice of Denver, and we'd like to keep it that way. With local media under siege, it's more important than ever for us to rally support behind funding our local journalism. You can help by participating in our "I Support" program, allowing us to keep offering readers access to our incisive coverage of local news, food and culture with no paywalls.
Make a one-time donation today for as little as $1.