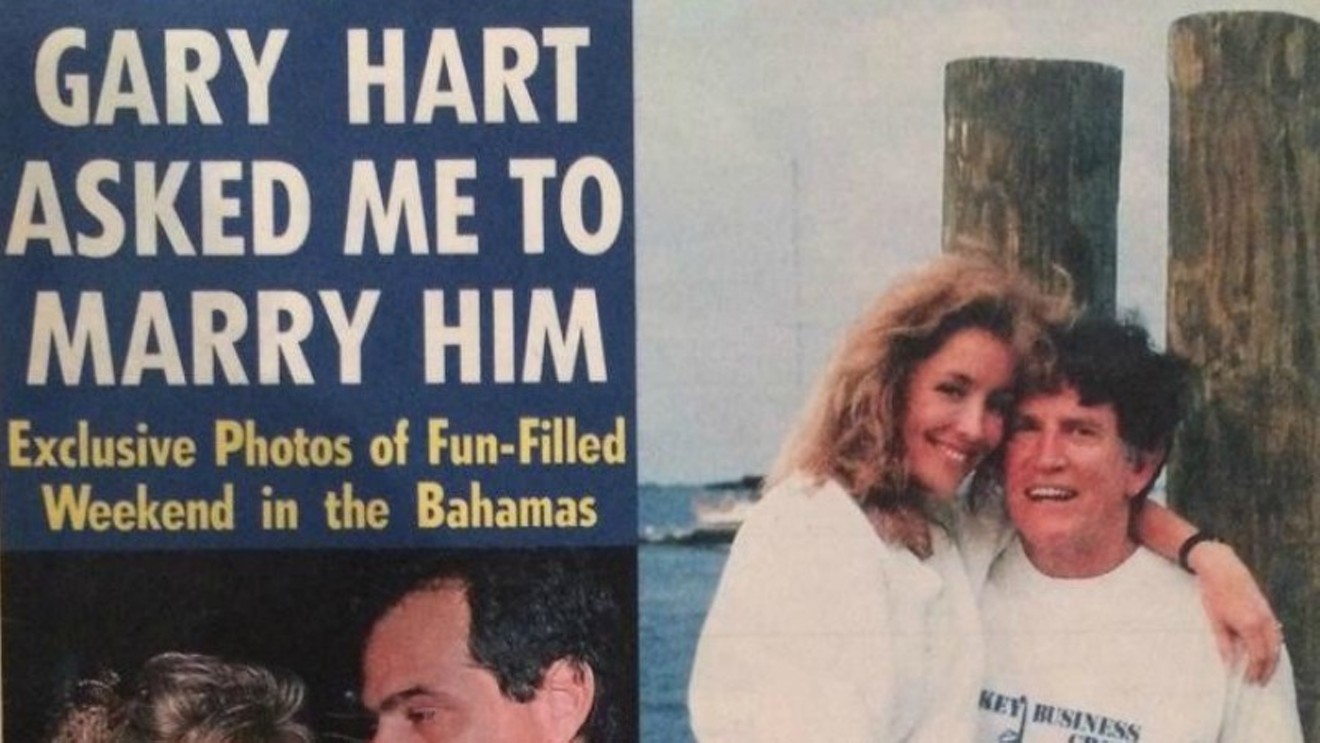 This National Enquirer cover spelled doom for Senator Gary Hart's presidential aspirations. File photo
In "Was Gary Hart Set Up?," published October 16 by The Atlantic, writer James Fallows shares a claim that a photo of Senator Gary Hart with a young woman name Donna Rice, which ultimately ended Hart's 1988 run for the White House, was a trap arranged by a political operative of future president George H.W. Bush.

"History bombshell!" MSNBC's Rachel Maddow enthused while introducing a segment with Fallows broadcast after the story's publication and shared below. "My favorite kind!"

The arrival of this assertion corresponds with what's primed to be Hart's return to the national public eye. The Front Runner, a new movie starring Hugh Jackman about Hart's rise and fall, is set for release early next month and will be screened on Thursday, November 8, at the Ellie Caulkins Opera House as part of the Denver Film Festival's annual Big Night presentation. Highlighting the red-carpet event will be a post-screening Q&A with director Jason Reitman, of Juno fame, who'll presumably have some new questions to answer thanks to Fallows.

Hart, who also ran for president in 1984, has pushed back on what he sees as popular misconceptions about the Rice matter for years, as evidenced by this excerpt from a Westword Q&A published in 2008:

Time's take on the Hart scandal.
time.com
Gary Hart: Anytime the subject comes up, I’m obliged to correct the media myth that I dared or challenged reporters to follow me. I did not. I did not, even though for twenty years I’ve had to live with that allegation. It’s just not true.

Westword: There was a New York Times article [written by E.J. Dionne and published on May 3, 1987] that’s generally mentioned as the source of those claims….

GH: It came out the same day as the infamous Miami Herald report [which claimed that a young woman had been seen coming out of Hart’s Washington, D.C., residence the previous night]. They didn’t place me under surveillance as a result of that sentence….

WW: You were already under surveillance.

GH: I was already under surveillance based on rumors, inaccurate rumors. And the sentence in E.J. Dionne’s profile was very much directed to him, and he knows that. I just said, "E.J., you’re welcome to accompany me in my daily rounds if you think I’ve got time to chase girls." [The quote as published read, “Follow me around. I don’t care… I’m serious. If anybody wants to put a tail on me, go ahead. They’d be very bored.”] He understood it was an invitation. It was to be openly pursued, but I was not stupid enough to dare or challenge the entire press corps. That’s crazy, and everybody in journalism who’s known me for thirty years knows it’s not true. But it was the justification, the after-the-fact justification for supporting the Miami Herald in the media: "Hart dared us to follow him." I didn’t. I simply didn’t.

The Atlantic piece adds a new twist to the legend, as is noted in this segment from Rachel Maddow's show:


In the Atlantic article, Hart associate Raymond Strother says that circa 1991, Lee Atwater, his counterpart in the Bush campaign and a legendary dirty trickster, made a deathbed confession about his role in the controversy. Strother quotes Atwater as insisting, "I did it! I fixed Hart."

Strother maintains that he decided against immediately sharing Atwater's comments with Hart because he didn't want to cause him more pain when he finally seemed to be moving on with his life. But he changed his mind within the last year after the return of prostate cancer that had been treated a dozen years earlier. Strother's now in remission, but during what he thought would be a goodbye lunch with Hart, he divulged details of what he characterized as the Atwater plan. Included in the account were references to the alleged involvement of Strother pal Billy Broadhurst, who took Hart on his fateful Monkey Business cruise.

Fallows writes that the plot involved "contriving an invitation from Broadhurst for Hart to come on a boat ride, when Hart intended to be working on a speech. Ensuring that young women would be invited aboard. Arranging for the Broadhurst boat Hart thought he would be boarding, with some unmemorable name, to be unavailable — so that the group would have to switch to another boat, Monkey Business. Persuading Broadhurst to 'forget' to check in with customs clearance at Bimini before closing time, so that the boat 'unexpectedly' had to stay overnight there. And, according to Hart, organizing an opportunistic photo-grab."

Hugh Jackman portrays Gary Hart in The Front Runner.
YouTube file photo/File photo
The pose for the pic took about five seconds, Hart estimates in his own conversation with Fallows — but that was all it took.

The offering's premise invites speculation, and Fallows goes there.

"If history had gone in a different direction in 1987, and Hart had become the 41st president rather than Bush, then Bill Clinton would not have had his chance in 1992, or perhaps ever," Fallows suggests. "George W. Bush, who found his footing with a place on his father’s winning campaign, would probably never have emerged as a contender. When and whether Barack Obama and Donald Trump might ever have come onto the stage, no one can say. 'No first Bush if things had turned out differently,' Gary Hart told me. 'Which means no second Bush — at least not when he arrived. Then no Iraq War. No Cheney. Who knows what else?'
KEEP WESTWORD FREE... Since we started Westword, it has been defined as the free, independent voice of Denver, and we'd like to keep it that way. With local media under siege, it's more important than ever for us to rally support behind funding our local journalism. You can help by participating in our "I Support" program, allowing us to keep offering readers access to our incisive coverage of local news, food and culture with no paywalls.
Make a one-time donation today for as little as $1.