Thousands Turn Out in Denver for Peaceful Protests on Day Six 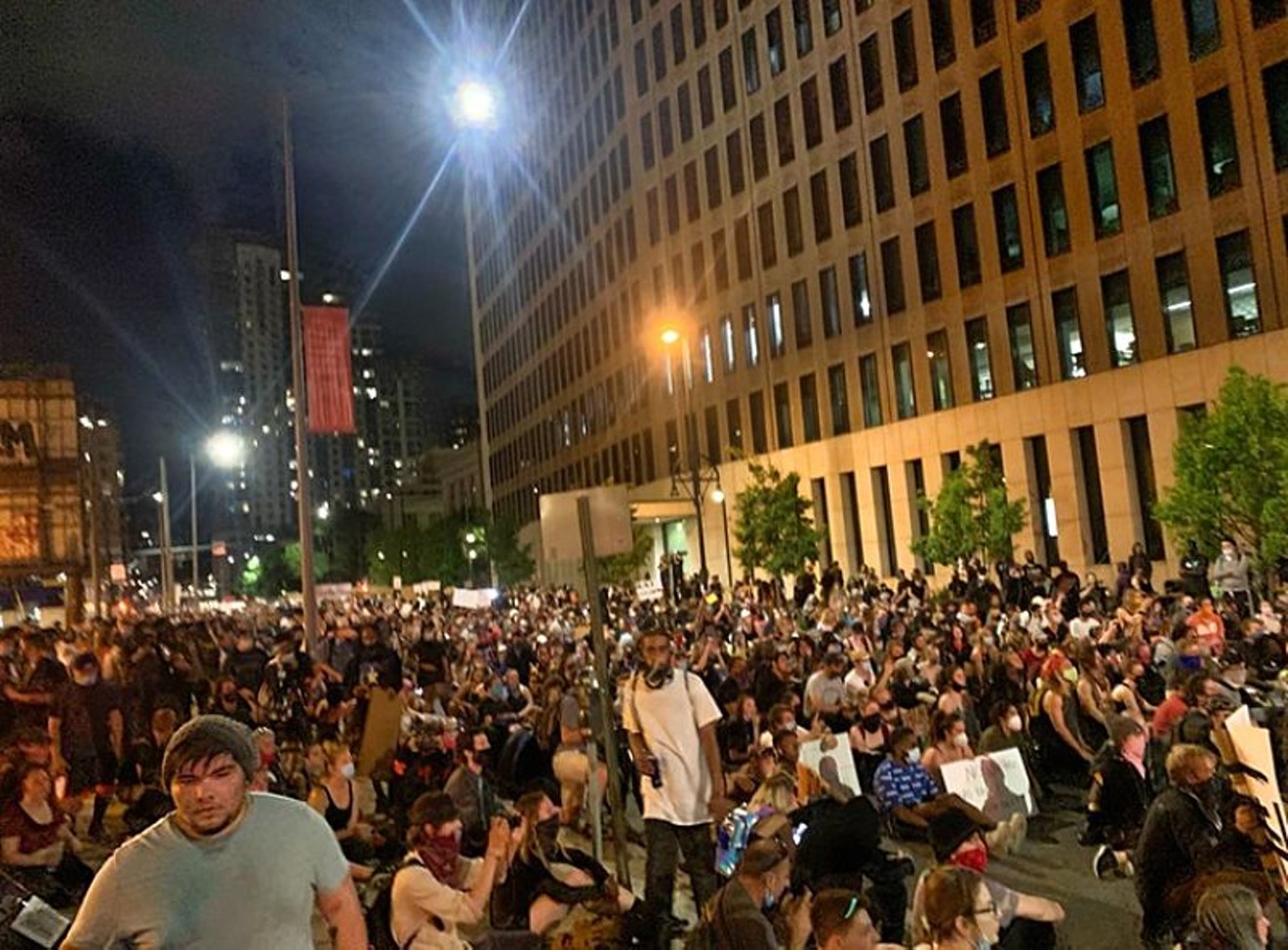 Thousands of protesters took a knee or sat in silence for nine minutes at 20th and Curtis streets. Conor McCormick-Cavanagh
For the sixth day in a row, protesters gathered at the Colorado Capitol to demand justice for George Floyd and decry police brutality. Although police did end up dispersing the last of the crowd at 1 a.m. June 3 by shooting pepper-spray balls and launching smoke grenades, the final hours at the Capitol were the least tense of the past week...by far.

At 8:46 p.m. on June 2, when around a thousand demonstrators were still gathered outside the Capitol, phones began buzzing and ringing to let Denver residents know that curfew was fourteen minutes away.

Many in the crowd booed as they read their phones, and minutes later heard over the loudspeaker that the 9 p.m. curfew was in effect. But they stayed focused on the message: Justice for George Floyd.

As the official rally concluded, a man began launching fireworks. A handful of protesters ran after him, took away the fireworks, and broke them. Those nearby applauded their efforts. Said one woman: "We don't play that. We don't play that."

Protesters then began marching throughout downtown Denver. At 20th and Champa streets, they sat in silence for nine minutes to mark the nearly nine minutes that Floyd had a police officer's knee on his neck.

The march then worked its way back to the Capitol, where people held up their phones with the lights on. It was close to 10:30 p.m., and there were no police to be seen. Without being constantly reminded the curfew was in place, the crowd was calm, chanting phrases like "We are one" and "We love you."

The organized part of the protest wrapped up just around 11 p.m., as cars pulled up on Lincoln in front of the Capitol and began blasting music. With Notorious B.I.G. playing in the background and people hanging on the lawn, the scene had the feel of that period just after a band stops playing at a concert and the blissful crowd is figuring out what to do next.

Teenagers showed off their breakdancing moves on Lincoln; one did back flips for an appreciative audience.

As the evening drifted past midnight, only around fifty people remained.

Then, right at 1 a.m., Denver Police Department officers in riot gear moved in. A loudspeaker on a truck announced that protesters had to leave the area or they would be subject to arrest. Most ended up scattering, and police moved in, shooting pepper-spray balls or lobbing smoke grenades toward those few who wouldn't move.

Otherwise, it ended quietly. And as the last people left, some offered rides to those they'd met that day.

"You good, bro?" the driver of a pickup asked a man walking along the street. The man said he was fine and declined a ride. Responded the driver, "Stay safe."

Protests are set to continue in the coming days.
KEEP WESTWORD FREE... Since we started Westword, it has been defined as the free, independent voice of Denver, and we'd like to keep it that way. With local media under siege, it's more important than ever for us to rally support behind funding our local journalism. You can help by participating in our "I Support" program, allowing us to keep offering readers access to our incisive coverage of local news, food and culture with no paywalls.
Make a one-time donation today for as little as $1.