Ugly Fallout From Indefinite Closure of I-70 in Glenwood Canyon 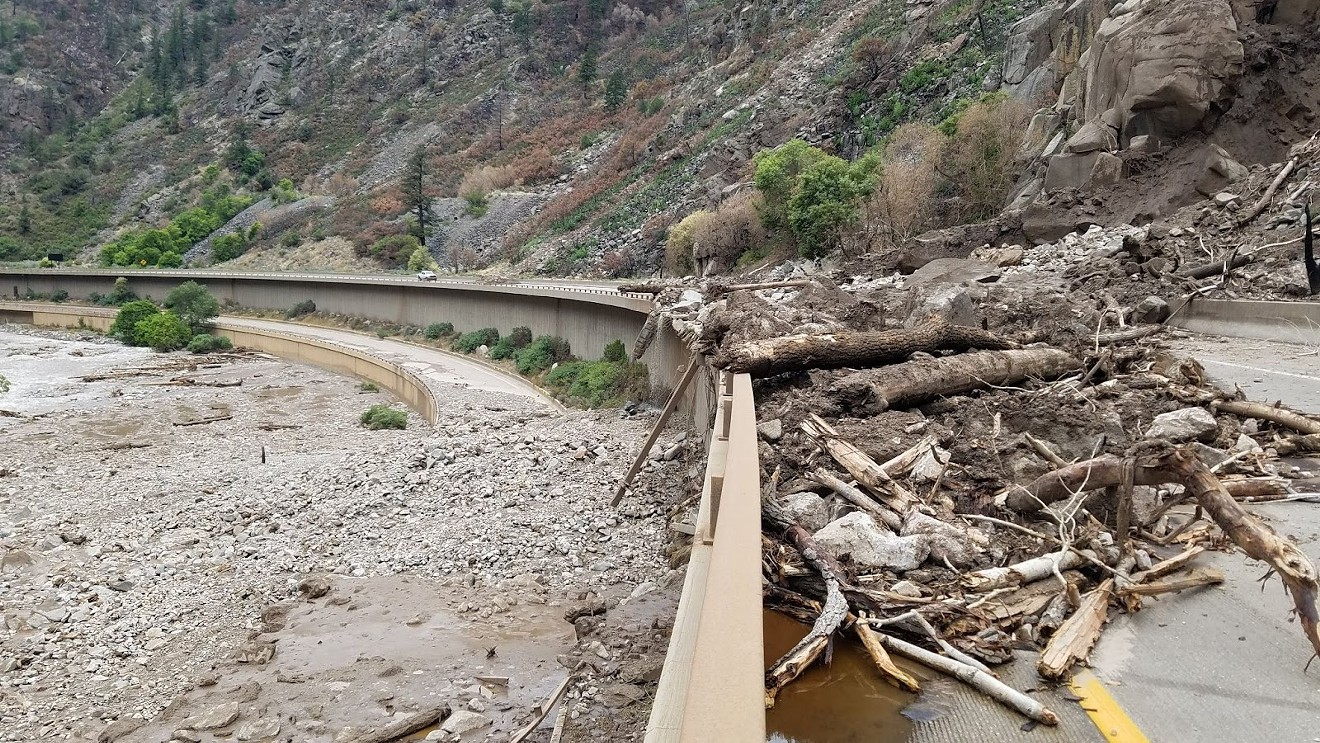 An August 1 photo of damage to Interstate 70 because of a mudslide. Colorado Department of Transportation
According to the Colorado Department of Transportation, Interstate 70 through Glenwood Canyon is "expected to be closed indefinitely at Exit 87 (West Rifle), Exit 109 (Canyon Creek), Exit 116 (Glenwood Springs) and Exit 133 (Dotsero), due to mudslides from the Grizzly Creek burn scar." CDOT stresses that "motorists should plan for an EXTENDED CLOSURE."

Mudslides have shut down access to I-70 through Glenwood Canyon multiple times over the summer, but the latest closure is likely to be the most protracted because of what CDOT refers to as "extreme damage" to the viaduct structure — damage unlike anything crews and engineers have seen before, the department says.

While there are alternative routes to get around the affected area, they're much more time-consuming, and the additional traffic is having far-ranging consequences, as I discovered on Sunday, August 1. My commute from the Western Slope to the Denver area took hours longer than the reverse drive only days earlier, and along the way, I encountered a range of potentially dangerous conditions on overwhelmed roadways, as well as other unusual episodes — like a traffic jam outside Fairplay in the middle of a Sunday afternoon.

Early on Thursday, July 29, I'd joined my wife, Deb, on a drive to her family's cabin on the Grand Mesa, not far from Palisade. Our daughter Lora followed separately, and taking I-70 through Glenwood Canyon, our total travel time was pretty typical: around three and a half hours from our home in the southwest suburbs to the cabin. We spent the day enjoying the natural splendor of the area, which we saw with fresh eyes thanks to our other guests: two four-month-old puppies, Sydney and Gryffin, along with our beloved ten-year-old goldendoodle, Lucy.

The cabin is largely a technology-free zone, with no wifi, which is a big reason that we enjoy it so much. But on Friday, we got a call on the ancient phone attached to one wall (it has a rotary dial) from Deb's sister, who informed us that mudslides had closed Glenwood Canyon again, and the shutdown was expected to last through the weekend, at least.

As a result, we decided to head back to the Denver area earlier than planned on Sunday. We were on the road by 8:20 a.m., and as soon as we got some cell coverage, we checked Waze and learned about two canyon alternatives.

The first took us through Glenwood Springs and onto a series of roads that would supposedly deposit us back on I-70 near Vail in around five hours under a best-case scenario — and since it takes about an hour and forty minutes to get from our house to Vail under ideal circumstances (which are ultra-rare on summer Sundays), our total time would have been close to seven hours, and probably longer. For that reason, we went for option two, which involved us heading out on U.S. 50 through Cedaredge and Montrose, then jumping onto 285. When we left, the estimated drive time was five hours and 51 minutes — a worrisome prospect given the presence of our passenger puppies, who'd never been on a commute anywhere near that long. But what other choice did we have?

Another mudslide damage photo of I-70 through Glenwood Canyon from August 1.
Colorado Department of Transportation
Irony alert: A stretch of U.S. 50 between Montrose and Gunnison has been closed regularly on recent weekdays for major road construction projects. But the road is open on the weekends, and as a result, we got an up-close look at giant boulders and the heavy equipment that's on the site to deal with them. Closures in the area are expected to continue intermittently through April 2022.

After navigating this zone, we hit Blue Mesa Reservoir on the Gunnison River, where water levels are distressingly low; several boat ramps have closed in recent days as a result. But with the detour, the roads were clogged anyway. Most of the highway has only one travel lane in each direction, and because plenty of commercial trucks were on the road, along with scads of recreational vehicles, speeds slowed in a major way — and the few passing lanes along the reservoir were too short to accommodate the volume, with frustrated drivers sometimes taking crazy chances to bypass semis struggling up the hills.

The situation was similar on 285, where at one point we had to slam on the brakes because RVs were slowly pulling onto the highway from a turnoff just past the point where the passing lane ended. Traffic came to a complete stop for nearly five minutes as the parade of recreational vehicles pulled onto 285 and then slowed down everyone else for miles thereafter. And then there was the jam that began near Fairplay's South Park City Museum, which took around ten minutes to clear for reasons that had everything to do with drivers who would have much rather been driving at highway speed on I-70.

Granted, the detour took us through some of Colorado's most gorgeous countryside and introduced us to small towns that even many natives of the state don't know, like Ohio City, Austin and Parlin. We also got a reminder of the political divide across the state. In Chaffee County, twenty miles or more of fence line was decorated with hundreds of American flags every 100 feet or so; not far away, we encountered one giant banner that read "Don't Blame Me: I Voted for Trump" and another huge sign that announced "TRUMP 2020: NO MORE BULLSHIT."

As we neared the metro area, 285 sprouted another lane, allowing us to make better time. But our total commute still topped out at about six hours and twenty minutes — around half an hour longer than Waze had predicted and nearly double the time it took for us to reach the Grand Mesa when I-70 through Glenwood Canyon was still flowing four days earlier. Fortunately, the puppies (and Lucy) came through the journey better than we did.

Similar slowdowns will impact commercial and private traffic trying to cross the state for the foreseeable future, causing untold headaches for locals, tourists, truckers and plenty of others. And right now, there's no end in sight.

By the way, CDOT's recommended detour around Glenwood Canyon for westbound motorists from Denver calls for drivers to exit I-70 at Exit 205 (Silverthorne) and travel north on Colorado Highway 9 toward Kremmling before heading west on U.S. Highway 40; they're then directed to turn south on Colorado 13 before returning to westbound I-70 at Rifle's Exit 90. Eastbound motorists should take the same route in reverse. For more information, visit cotrip.org.
KEEP WESTWORD FREE... Since we started Westword, it has been defined as the free, independent voice of Denver, and we'd like to keep it that way. With local media under siege, it's more important than ever for us to rally support behind funding our local journalism. You can help by participating in our "I Support" program, allowing us to keep offering readers access to our incisive coverage of local news, food and culture with no paywalls.
Make a one-time donation today for as little as $1.