Harold Henthorn and his wife, Toni, whom he was convicted of killing. Facebook
The U.S. Supreme Court has declined to hear an appeal by Harold Henthorn, whom authorities say killed his second wife, Dr. Toni Henthorn, by pushing her off Deer Mountain in Rocky Mountain National Park in 2012. In so doing, the jurists let stand a July 2017 affirmation of previous rulings by the U.S. Court of Appeals for the 10th Circuit, which rejected Henthorn's arguments regarding what his writ to the court calls "the doctrine of chances." Specifically, the document, on view below, maintains that the original court biased the jury against him by allowing testimony about the suspicious death of Henthorn's first wife, Lynn, and a serious accident suffered by Toni the year before her death.

As we've reported, a request for order filed by then-U.S. Attorney John Walsh, who was placed in charge of prosecuting the case because Rocky Mountain National Park is federal land, stated, "On September 29, 2012, Harold Henthorn's wife Toni Henthorn fell to her death with Harold Henthorn as the only witness, in a remote location in Rocky Mountain National Park, Colorado." Walsh added that "investigation has revealed there are three $1.5 million life insurance policies on Toni Henthorn, two of which are in trusts, and one in which Harold Henthorn is the sole beneficiary."

This wasn't the only circumstance that Walsh saw as suspicious. In the report, he implied that Harold was living off Toni, a respected ophthalmologist, while conducting a mysterious double life. Here's a key passage:


Harold Henthorn travels frequently, even weekly, allegedly for work. However, there is no indication that he has actual clients. He has no business in his name, no partners able to be located by law enforcement to date, and no one interviewed to date knows who his clients are or were, yet he told investigators he was financially secure, and he was a fundraiser for nonprofits like churches and hospitals. At his wife's funeral witnesses told investigators there were no attendees from Harold Henthorn's work and witnesses interviewed by investigators revealed no one actually knew what his business was called, or any of his projects or clients.

Was Henthorn capable of murder? Walsh floated that possibility by pointing out that "in 1995, Harold Henthorn's prior wife" — Lynn Henthorn — "died from injuries sustained from being crushed by a car while he was changing a tire in a remote location. The car allegedly came off the jack as he was throwing the tire in the trunk, crushing his wife, who was under the car for unknown reasons. There were no witnesses other than Harold Henthorn, and a life insurance policy on her had been taken out several months prior."

Meanwhile, Walsh cited what could have been another attempt by Harold to kill Toni in a way that would have seemed accidental. He wrote:

At Henthorn's 2015 trial, the prosecution was allowed to introduce information about both of the prior incidents, and after Henthorn was convicted and sentenced to life in prison during a hearing in which he stated, "I did not kill Toni," he appealed for reasons alluded to in the introductory section of the 10th Circuit's ruling.

"This case presents us with the difficult issue of whether a district court presiding over a murder trial abused its discretion in admitting evidence of prior, similar incidents, including whether the defendant killed his second wife in circumstances similar to those that led to the death of his first wife," the document states, adding, "We affirm. The district court did not abuse its discretion in admitting prior similar conduct. The court fully explained, and we agree, that the evidence was properly admitted under Federal Rule of Evidence 404(b), was relevant, and was not substantially outweighed by unfair prejudice." 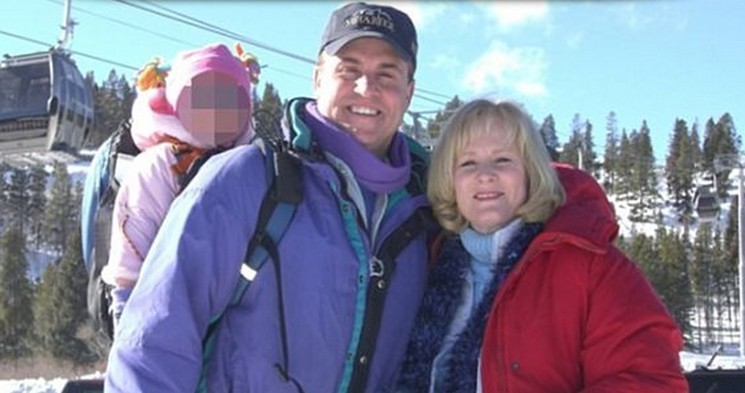 Harold and Toni Henthorn with their daughter, whose identity is obscured in this photo.
Facebook
Henthorn's aforementioned writ to the U.S. Supreme Court begs to differ. It asks that the justices consider the following question: "Whether the doctrine of chances, which purportedly differs from character evidence because it is based on the objective improbability that similar incidents coincidentally repeat themselves, can logically support the inference that all of the incidents were the product of design."

After synopsizing the case, the writ adds: "This Court should grant review in this case to provide guidance on how to apply the doctrine of chances, an issue that has confounded, and will continue to confound, the lower courts. Properly understood, the doctrine of chances allows only the limited inference that one or some, but not all, of the incidents — charged and uncharged — were intentional. And critically, the doctrine is incapable of discerning which of the incidents were intentional and which were not. Thus, the doctrine cannot single out the charged incident as non-accidental, which makes evidence admitted under the doctrine irrelevant to whether the charged incident was intentional and therefore a crime."

Many assertions and statistics follow, but they weren't enough to entice the U.S. Supreme Court, whose rejection of the writ, issued on January 8, is brief and to the point. "Petition DENIED," it reads before noting that Justice Neil Gorsuch, who's from Colorado, "took no part in the consideration or decision of this petition."

Thus ends Henthorn's bid for freedom, but possibly not his trips to court. After all, he's never been held responsible for Lynn's death, which many of her family members fervently believe he caused.

For more on the case, check out The Accidents, a new ebook by past Westword contributor Caleb Hannan. Click to read Harold Henthorn's petition for a writ of certiorari to the U.S. Supreme Court.