Parker Walton's marijuana grow facility, which was at the center of the controversy. Courtesy of Fox31
Plenty of legal experts were concerned that a lawsuit filed by two Pueblo County landowners who claimed that a nearby marijuana grow facility has reduced their property values in part because the smell makes horseback riding less pleasant could negatively impact the marijuana industry in Colorado and beyond because it was based on federal racketeering laws.

But on October 31, a Denver-based federal jury rejected the claims of Phillis Windy Hope Reilly and Michael P. Reilly, delivering a victory to CannaCraft owner Parker Walton that his attorney, Matthew Buck, notes was swift and decisive.

The Reillys, who are married, hold the deeds for three lots in a Rye, Colorado, development called the Meadows at Legacy Ranch — "approximately 105 acres of beautiful rolling pasture with sweeping mountain vistas that include views of Pike's Peak," according to the original suit, filed in conjunction with the anti-pot group Safe Streets Alliance; it's accessible below. In February 2015, when the complaint was submitted, the couple didn't live on the property full-time, but liked to visit there on the weekends so that their kids could ride horses and hike. Today, Buck says, they've permanently located there after converting a barn into a residence.

Adjacent to the property is a marijuana grow facility owned by Walton, one of the remaining three defendants in the latest version of the suit; the others are 6480 Pickney LLC and Camp Feel Good LLC, companies owned by Walton that were responsible for obtaining the initial license and purchasing the land, respectively. The complaint maintained that this proximity is a problem, because "growing recreational marijuana is 'noxious, annoying or offensive activity' by virtually any definition because marijuana plants are highly odorous, and their offensive smell travels long distances." Hence, the suit claimed, the grow violates assorted covenants governing Meadows at Legacy Ranch, thereby impinging on their ability to enjoy their land as they'd like. 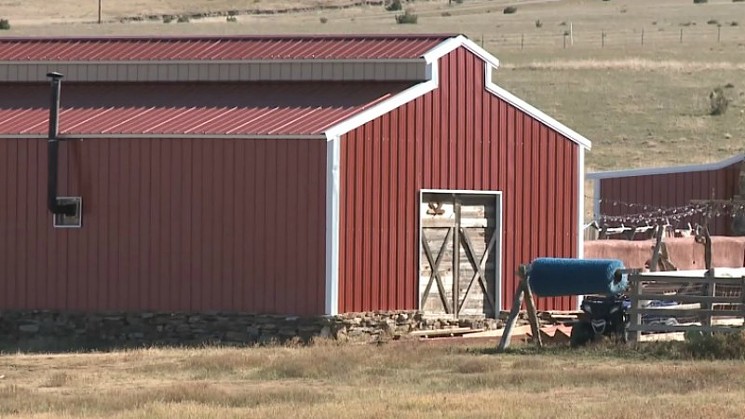 A barn on the Reilly family ranch.
Courtesy of Fox31
On top of that, the sight of a building under construction on the grow site "exacerbates the injury, for when the Reillys and their children visit the property, they are reminded of the racketeering enterprise next door every time they look to the west."

The suit also maintained that the grow has hurt property values — plus, "the large quantity of drugs at marijuana grows makes them targets for theft, and a prospective buyer of the Reillys’ land would reasonably worry that the 6480 Pickney Road marijuana grow will increase crime in the area."

The Reillys' attorneys are with Cooper & Kirk, a powerhouse law firm whose clients include cannabis-loathing U.S. Attorney General Jeff Sessions — and the tool they attempted to use against Walton was the Racketeer Influenced and Corrupt Organizations Act. In June 2017, the U.S. Court of Appeals for the Tenth Circuit ruled in favor of RICO usage for reasons summarized in the following excerpt from its decision:

The court's blessing of RICO, which is routinely utilized in prosecuting members of organized-crime enterprises, sent shock waves through the burgeoning cannabis industry. But the weakness of the case as a whole appears to have been a bigger factor in the jury's decision to side with Walton.

Marijuana grow facility owner Parker Walton.
Courtesy of Fox31
Opening arguments took place early on October 29, and shortly thereafter, Buck recounts, "we heard from one of the plaintiffs, Hope Reilly. She talked about being a fifth-generation Coloradan, which is why she wants to live where she's living. But she admitted that the odor was intermittent, which was backed up by every single witness; everyone says it's not persistent. For example we heard from the president of the homeowners' association, who also testified that the odor was intermittent. He didn't testify about smelling it on the Reillys' property but said he could smell it from the road."

During his testimony, Billings left out the Africa reference, Buck acknowledges, "but he did say the odor from a landfill was similar to the odor of a marijuana grow or a feedlot."

He adds that the Reillys' legal team attempted to prove their assertions about rising crime and falling property values in what he considers to have been quizzical ways.

"Their evidence that crime had gone up was that a little old lady who lived across the street had bought a gun," Buck says. "And they didn't really present any evidence that property values had gone down. They admitted that the value of the Reillys' property had gone up 12 percent — but they said it would have gone up 15 percent if it wasn't next to a marijuana grow. And I don't think that's compelling evidence of property damage."

After the plaintiffs wrapped, Buck got his turn. "I started off calling Parker, who talked about how the grow came to be and his plans to create a grow that was airtight — and the reasons one might want a grow that didn't exhaust or intake air from the outside. I then put on our real estate expert, Ivor Hill — and I ended the day with what I thought was our best witness, Melanie Borsage. She's an odor expert who's trained on the Nasal Ranger, the same device both the City and County of Denver and the Colorado Department of Public Health and Environment use to determine whether someone is in violation of odor standards." 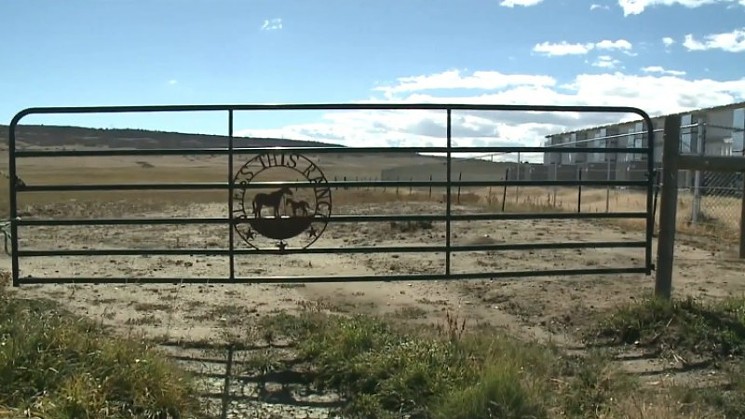 A gate on the Reilly family ranch.
Courtesy of Fox31
Borsage "did 128 separate readings around Parker's facility," Buck goes on, "and of the 128 readings, she was able to detect marijuana at eight of those using her naked nose. And using the Nasal Ranger, she was able to discern the lowest reading possible, which is in the 0-2 range. But the City and County of Denver records a violation at 7 on the Nasal Ranger. So this was well below a nuisance. And she testified that readings for a landfill or a feedlot can be in the 30-60 range — an odor thirty to sixty times stronger than my client's grow facility."

The closing argument by the Reillys' attorneys "was basically that my client was producing odor and that it couldn't possibly be from any of the other numerous legal and illegal grows in Pueblo County, that marijuana has increased crime in the area, and that the plaintiff's property values had been decreased. And our closing was short and simple. It effectively was that the plaintiffs had presented no evidence my client had damaged them. We'd actually presented evidence that my client wasn't the source of any marijuana that they may be smelling, and given the intellect of the jury, we expected them to come back with a no-responsibility finding, which they did."

This result doesn't kill the prospect of federal racketeering laws being turned against owners of marijuana businesses in states where cannabis is legal. Buck points out that two federal RICO suits of this sort are pending — one in Massachusetts, the other in California — while a third was recently dismissed in Oregon because "they don't recognize use-and-enjoyment damages, as Colorado does."

In Buck's view, "a wily plaintiff's attorney could probably pull the transcripts and filing from this case and figure out what the plaintiff's lawyers did wrong. But I still feel it will be an uphill battle to prove RICO, because it's so hard to prove property damage. Every objective study shows that marijuana businesses improve the property value of businesses around them, because once marijuana moves into your neighborhood, it's proof that the neighborhood has arrived."

By the same token, he believes "this victory will hopefully give a road map to how other defense attorneys involved in existing and future RICO claims can defeat them."

Click to read the original lawsuit, Safe Streets Alliance, et al., v. Alternative Holistic Healing, LLC, et al.
KEEP WESTWORD FREE... Since we started Westword, it has been defined as the free, independent voice of Denver, and we'd like to keep it that way. With local media under siege, it's more important than ever for us to rally support behind funding our local journalism. You can help by participating in our "I Support" program, allowing us to keep offering readers access to our incisive coverage of local news, food and culture with no paywalls.
Make a one-time donation today for as little as $1.