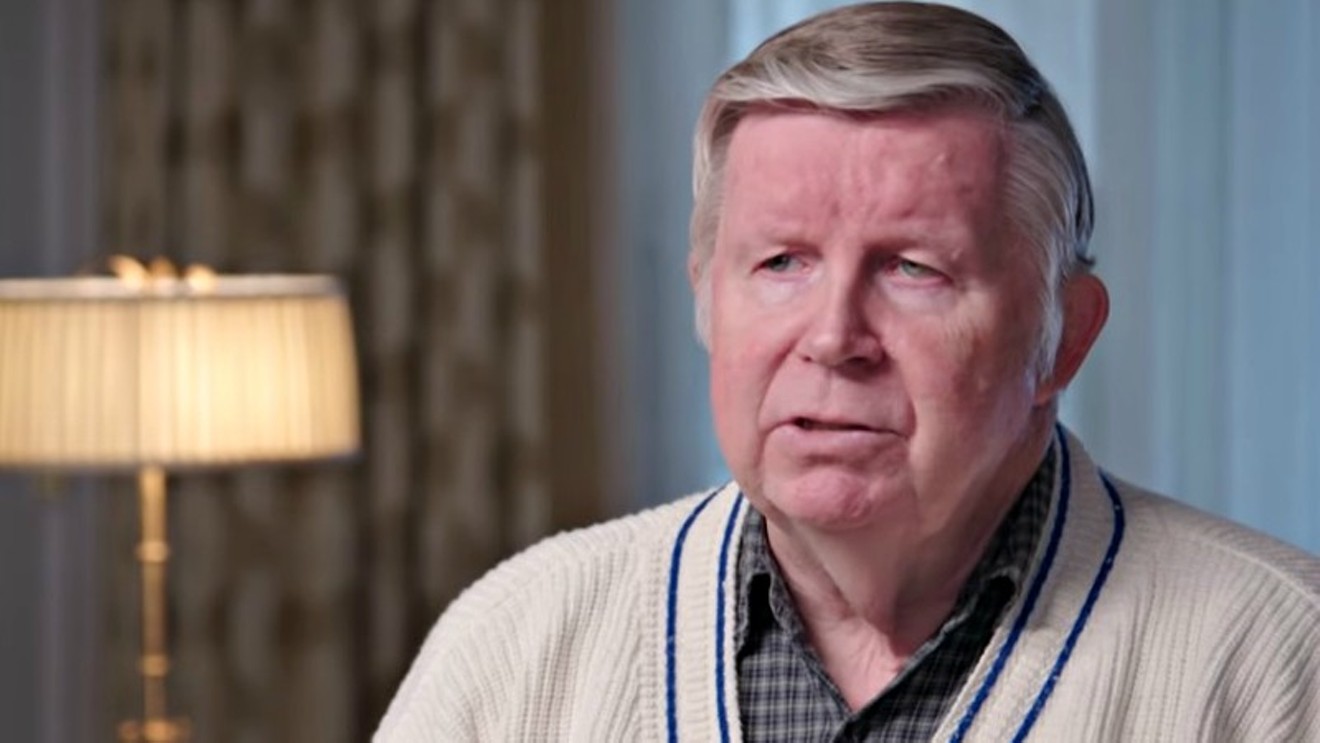 Douglas Bruce during a 2018 segment for Full Frontal With Samantha Bee. TBS via YouTube
Way back in 1992, Coloradans approved the Taxpayer Bill of Rights, shorthanded as TABOR, whose provisions include a requirement that voters must approve tax increases. In the quarter-century-plus since then, the amendment has been regularly pilloried by progressives, who blame it for financially starving the education system in the state, among many other claims.

But condemn TABOR at your own risk — especially if you're within earshot of Douglas Bruce.

The man known as the father of TABOR, Bruce has defended the amendment for more than a quarter-century in widely varied venues, including a 2018 segment on TBS's Full Frontal With Samantha Bee. So when Tom Cronin and Bob Loevy, a pair of political scientists at Colorado College, dared to suggest in a recent Colorado Springs Gazette op-ed that "money for state services has dwindled under TABOR," they should have known Bruce would fight back with extreme prejudice.

Bruce defended TABOR in a fiery email to Loevy excerpted below that he supplemented with an article about the similarly controversial 1982 Gallagher Amendment, also accessible here. And in conversation, he's equally passionate about a measure that he believes has been very, very good for the Colorado citizenry despite all the nasty names politicians on the left side of the ideological spectrum have called it over the years.

If TABOR won approval, Bruce recalls, such critics "said Colorado would collapse and would be destroyed. But it's been 27 years, and if we were pushed over the cliff, I guess we must still be falling. Because I haven't heard or felt any destruction, damage or anarchy."

He adds that during the campaign for TABOR, opponents "had a bond dealer say at a debate in the presence of John Sanko, who was the dean of reporters at the Capitol for the Rocky Mountain News, that if TABOR passed, there would be no money for police and when the Pope came for World Youth Day in 1993, he would probably be assassinated. And Governor [Roy] Romer, another scoundrel, said TABOR was like throwing a bomb into a crowded schoolyard. These people had absolutely no shame. But frankly, I think it's bounced back on them. Look at the economy: It's doing great." 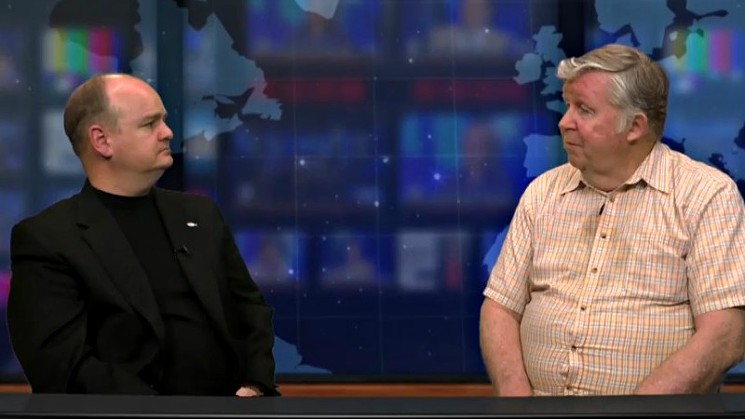 Douglas Bruce, right, during a 2018 interview with former Colorado legislator Gordon Klingenschmitt.
YouTube
Colorado's treasury department offers an online primer about the TABOR and Gallagher amendments. This is the description of the former:

Under TABOR, the state has returned more than $2 billion to taxpayers rather than using these funds to pay for K-12 education, higher education, transportation, public health services, public safety and other services.

In 2005, Colorado voters approved Referendum C, which suspended the revenue limit in TABOR from 2006 to 2010 and modified it for future years.

As for the suggestion that TABOR has hamstrung the state, Bruce offers "the facts about growth in property-tax revenue and total state revenue. And these are all verifiable figures that come from the state."

In his words, "TABOR only slowed a portion of the growth rate, a portion of government budgets. In 1993, it covered about 60 percent, and now it's even less of total government spending, which now is almost $33 billion annually. That's triple what it was when TABOR went into effect, and it breaks down to the state spending about $24,000 for the average family of four every year. And that doesn't include federal taxation, local sales tax, vehicle taxes, car registration — and local property-tax revenue has gone from $2.4 billion in 1993 to $9 billion today. Isn't that enough?"

Colorado's government "is awash in cash," he goes on, "but every year, they try to deprive us of the excess revenue refund that TABOR requires. They act like if growth in government revenue goes from 5 percent to 4 percent, it's a cut. Well, it's not a cut, and they've illegally refused to refund the money because these people are chronic, genetic lawbreakers. It's inherent in the way they are. I know from having been in the legislature for one unpleasant, infamous session that they'll do anything to keep money and power for themselves. We have a deep state in Colorado as well as in Washington, D.C."

The suggestion that TABOR has created a public schools crisis of the sort that has Denver lurching toward a teachers' strike that could now get underway as soon as Monday, February 11, earns a dismissal from Bruce, too.

Douglas Bruce during a 2012 interview.
Fox21 via YouTube
"It's a lie," he says. "Spending on schools in Colorado has gone up by billions of dollars each and every year compared to when TABOR passed, because the sub-component of property-tax revenue has gone up. General school property-tax revenue in 1993 was about $1.4 billion. In 2017, it was $4.65 billion. So that means two years ago, they got $3.25 billion per year more than they got 24 years earlier. And yet they're saying that's not enough."

He doesn't buy the idea that Colorado teachers are badly underpaid, either. "Basically, about 70 percent of the money they want would go to salaries, which is more money for them. But if you pay a teacher $50,000 as opposed to $40,000, does that directly correlate into them doing a better job? It's just a windfall that doesn't lead to better education for Johnny and Susie."

Dividing total spending on what he calls "government schools" by the 700,000 or so students currently enrolled "comes to more than $12,000 per student. Now, private schools charge tuition of about $5,000, so you're paying double. And if the average classroom has 25 students, that means $300,000 per classroom. If the average teacher is getting $60,000, where does the other $240,000 go? They can't answer that. They want to change the subject or drop the napkin and hide under the table. But I'll tell you where most of it goes. It goes to administration. A majority of government school employees aren't teachers. They're administrators, paper pushers, and they generally get more than teachers."

The ballot-box failure last November of Amendment 73, which aimed to raise $1.6 billion for education in Colorado, was the third time such a measure fell short in recent years, and afterward, analysts pointed at the TABOR requirement that residents vote to raise their own taxes as the reason. But Bruce maintains that "at the local level, tax increases pass about half the time. The liberals are just upset they don't pass 100 percent of the time. But the result of having voter approval is that some bad ideas never make the ballot, which is good, and some bad ideas that do make the ballot are defeated, which is good. The voters, just by the passage of time, have tolerated all the taxes we pay now, but we pay more than enough."

As of yesterday, Bruce says, Loevy hadn't replied to his email, which doesn't surprise him. According to him, "there is no response, because I recited actual facts from the government — and since he and all liberals love the government so much, he couldn't attack the government. That's his deity, so I used his god against him, so to speak."

Still, Bruce remains frustrated by what he sees as the op-ed's "stupid implication that the Gallagher Amendment had caused the same kind of squeeze on property taxes that TABOR did on growth. Since TABOR, property taxes have gone up by billions, and even though TABOR slowed government growth, it's still tremendous. Everyone said TABOR was so extreme, but it was really very moderate. It just gave people the right to vote."

Continue to read an excerpt from Bruce's email, followed by a link to his Gallagher Amendment article.

I read your article in the Gazette claiming TABOR has caused state revenue to "dwindle." A Ph.D in political science should know better.

FACT: The state has borrowed billions illegally through COPs [certificate of participation] and other illegal devices. Technically, that is not revenue but it is spendable money.

FACT: In 2005, Referendum "C" (a statute) illegally changed a constitutional spending formula. The state is now cheating taxpayers out of $1+ BILLION in yearly refunds by that swindle, sold as a "five-year timeout" that has continued for 13 years. The total theft is nearly $20 BILLION.

For background, you might want to read how the (Senator) Gallagher Amendment fiasco has falsely been blamed on TABOR.

Click to access Douglas Bruce's article about the Gallagher Amendment, "Property Taxes Explained."
KEEP WESTWORD FREE... Since we started Westword, it has been defined as the free, independent voice of Denver, and we'd like to keep it that way. With local media under siege, it's more important than ever for us to rally support behind funding our local journalism. You can help by participating in our "I Support" program, allowing us to keep offering readers access to our incisive coverage of local news, food and culture with no paywalls.
Make a one-time donation today for as little as $1.