The eastbound Peak Period Shoulder Lane project depicted in this Colorado Department of Transportation illustration is already finished — but that's not clear from a new document about Trump administration infrastructure priorities. Colorado Department of Transportation
A newly released document purporting to list the fifty highest-priority infrastructure projects according to the administration of President Donald Trump includes improvements along Interstate 70 through the mountain corridor and Interstate 25 between Castle Rock and Monument.

Problem is, the report's origins are a little hazy, and a couple of notable errors in the Colorado sections raise questions about whether those who penned the document, on view below, are actually up to speed.

Not that CDOT spokeswoman Amy Ford is complaining about the projects' appearance in the document.

"We're very pleased to see I-70 and I-25 on the list," Ford says. "Not only are they critical corridors for the state of Colorado, but they're critical nationally. They are priorities of ours and priorities of the governor's. They're important not just from the standpoint of congestion, but also from an economic-development standpoint and a safety standpoint."

So what's the problem? The document was reportedly provided to the Trump transition team by the National Governors Association, and state officials have been told the projects are already in the vetting stage. But each one from Colorado has a significant flaw.

Take the "I-70 Mountain Corridor" entry, designated the 39th-highest infrastructure priority in the nation:

Emergency & National Security Projects report
The text calls for the creation of a "Mountain Express Lane" along thirteen miles of eastbound I-70 — but that's already happened.

What CDOT refers to as the "Peak Period Passing Lane" was put into place along the eastbound approach to Idaho Springs last year, and actually managed to improve the congestion on busy summer and fall weekends, as we noted in a September 2016 post.

Perhaps the authors of the report were drawing from outdated information — or maybe they meant "westbound," in order to add a Peak Period Passing Lane for drivers heading the other direction.

There's a similar gaffe in the I-25 item — supposedly the nation's fortieth-highest priority — although it's less obvious. 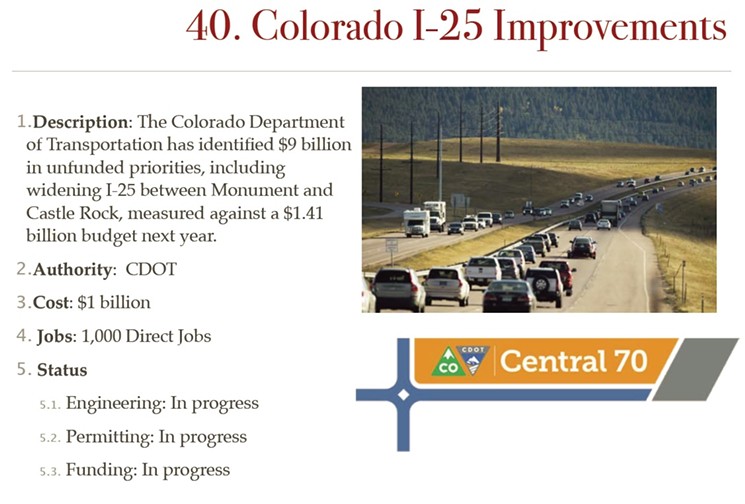 Emergency & National Security Projects report
In this case, the text says widening of the interstate between Monument and Castle Rock will cost around $1 billion.

Nope. According to CDOT's estimate, upgrading this stretch would actually run in the range of $400 million to $500 million. The $1 billion price tag would be more appropriate for widening a longer stretch of I-25 extending from Colorado Springs north of Denver.

Rather than focusing on the mistakes, though, Ford prefers to look at what the document gets right, including the notation about $9 billion in unfunded priorities. She confirms the figure, adding that "CDOT has submitted a full list of projects to the Trump administration that are shovel-ready." Details can be found at the agency's development program link.

CDOT would love for the feds to put a dent in that $9 billion shortfall. "We have approximately a $1 billion-per-year funding gap," Ford says. "Right now, the vast majority of our $1.4 billion annual budget is spent on maintaining the system we have. We have very few funds when it comes to spending on expansion or congestion mitigation. So any level of investment in infrastructure is sorely needed and would be welcomed."

As long as the money is spent on something that actually needs done. Here's the report.