Blown Forecasts and the Revenge of the Farting Weatherman 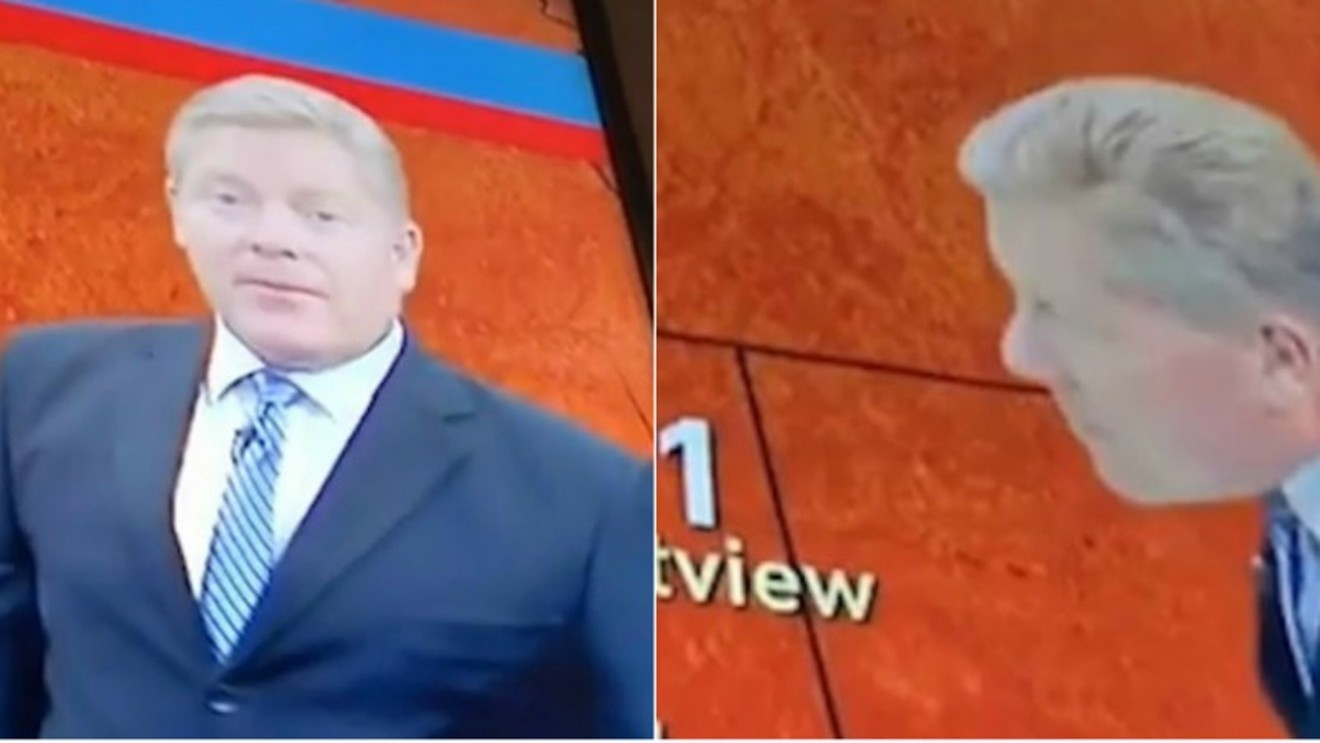 Former Denver weather forecaster Chris Dunn before and after releasing a hot air mass. New York Post via YouTube
The National Weather Service forecast for metro Denver in the early hours of October 9 called for heavy snow that might not stick to the roadways became of warm pavement temperatures but could potentially snap limbs from trees. What we've gotten instead in most city locations is cold rain and a little bit of sleet. In other words, a classic blown forecast of the sort former Denver weatherman Chris Dunn defended to us when he said the biggest misconception about people of his profession is "the idea that, 'Oh, you guys are always wrong' and 'If I had a job where I was always wrong and still got to keep my job, it'd be the greatest job in the world.'" Which makes it only appropriate that he recently became Internet-famous for apparently blowing a fart on the air.

We'll get to that in a minute; the video's on view below. But first, here's some background on Westword's coverage about the accuracy, or lack thereof, related to predicting weather conditions in Denver and Colorado.

On April 15, 1992, we published "Storm Warnings," a pre-Internet article that offered a snapshot of the skills exhibited by the weather personalities at channels 4, 7 and 9. From March 17 until April 2 of that year, their forecasts were tracked using temperatures as a guideline. If the extremes on a given day were within a cumulative ten degrees (for instance, a high off by seven degrees and a low wrong by just three), the prediction was judged correct — or at least correct enough. Anything further awry received a thumbs-down rating.

Back then, all three stations did fairly well one or two days in advance: Channel 4 passed 73 percent of the time; Channel 7 scored with 79 percent; and Channel 9 trailed the field with a still-respectable 64 percent. But things went south more often in the three- to five-day range, with Channel 4 ringing the bell for just 38 percent of its guesses and channels 7 and 9 tying at 48 percent. Simply put, forecasts more than two days in advance were considerably wide of the mark over half the time.

Ten years later, in April 2002's "Weather by Numbers," we offered up a variation on this analysis. Forecaster Marty Coniglio had previously told us that the human body can't feel temperature variations unless the swing is over five degrees. So we counted the number of times the high or the low was off by more than that, rendering a negative verdict if either or both failed to meet the standard. (Using this procedure, the example above of a predicted high off-base by seven degrees and a low incorrect by three degrees would be wrong, because the high was askew enough to feel the difference.) Unsurprisingly, this tally wound up lower than the other measure in every case.

Here are the results by station. 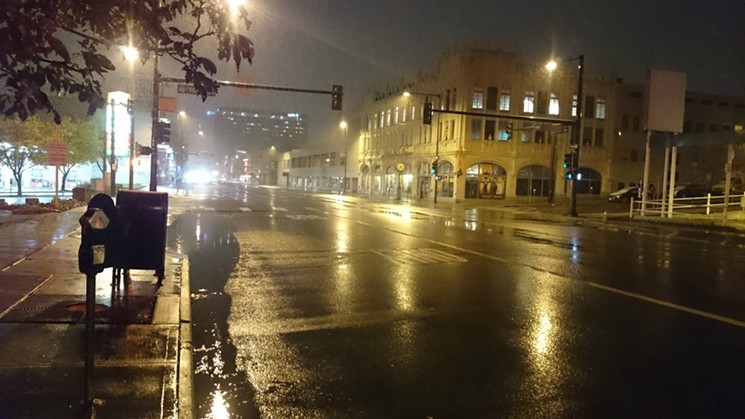 Outside Westword's 969 Broadway offices at around 4:45 a.m. this morning.
Photo by Michael Roberts
Channel 2: Predictions two days or less in advance were within ten degrees 69 percent of the time, and the three- to five-day forecasts wound up at 38 percent. Things got even uglier when the station was judged by the five-degree rule. The one- and two-day forecasts landed within range just 41 percent of the time, and only 17 percent of the three- to five-day hypotheses were in this ballpark by both measures.

Channel 4: One- to two-day predictions were within ten degrees on 70 percent of tries, as opposed to 73 percent in 1992, but three- to five-day assumptions scored 48 percent, a ten-degree upgrade. Channel 4 also scored well in the five-degree challenge, predicting the high and low on that scale 62 percent of the time one or two days ahead, and registering 36 percent three to five days in advance.

Channel 7: Calculations one or two days in advance were within ten degrees on 73 percent of attempts. But the longer-range numbers were troublesome — and because Channel 7 predicted seven days into the future instead of five, the outlet had more chances to stray. For days three through five, prognosticators scored 33 percent; on days six and seven, they racked up just 21 percent.

Channel 31: One- to two-day predictions were within ten degrees 80 percent of the time. Three- to five-day predictions weren't bad, either; the station's 41 percent was second only to Channel 4 in this bracket. But the outlet's team was less accomplished at predicting both the high and the low within five degrees. The one- to two-day score: 55 percent. The three- to five-day score: 11 percent.

Six years later, we interviewed Dunn in conjunction with the 36th Conference on Broadcast Meteorology, held in Denver circa June 2008, just over nine years before he buck-snorted live at his current station in Alabama, as seen in the following video:


Back then, Dunn and several of his colleagues argued that improved technology was helping forecasters do a better job of issuing better predictions — and plenty of alleged upgrades have been touted since then. But we've documented loads of problematic forecasts in recent years, including storms in 2015 and 2016 that snuck up on the area, resulting in Denver Public Schools being bashed on social media for calling snow days too late.

Of course, a forecast that's shaky in a different direction can raise different kinds of questions. Note that Mullen High School instituted a delayed start today and canceled at least one event based on predictions that haven't come true, at least as of this writing — and tweets by 9News's Corey Rose from earlier this morning have suggested that things will stay that way.

One note from Rose reads, "Where's the snow? Answer: Up in the mountains, anything over 7kft. You may see flakes in the metro but ground too warm for it to stick." Another quotes Coniglio as saying, "It'll never dip below freezing in metro today. No reason for plows in metro. Snow on grass in foothills."

For a longer-range idea of what to expect in the months to come, check out Westword contributor Chris Bianchi's post "Snow Is Coming: How Much Will Denver See This Season?" But there's a reason this headline is phrased in the form of a question. Even in 2017, weather predictions are still a crapshoot — and sometimes, as Dunn should understand, they just plain stink.