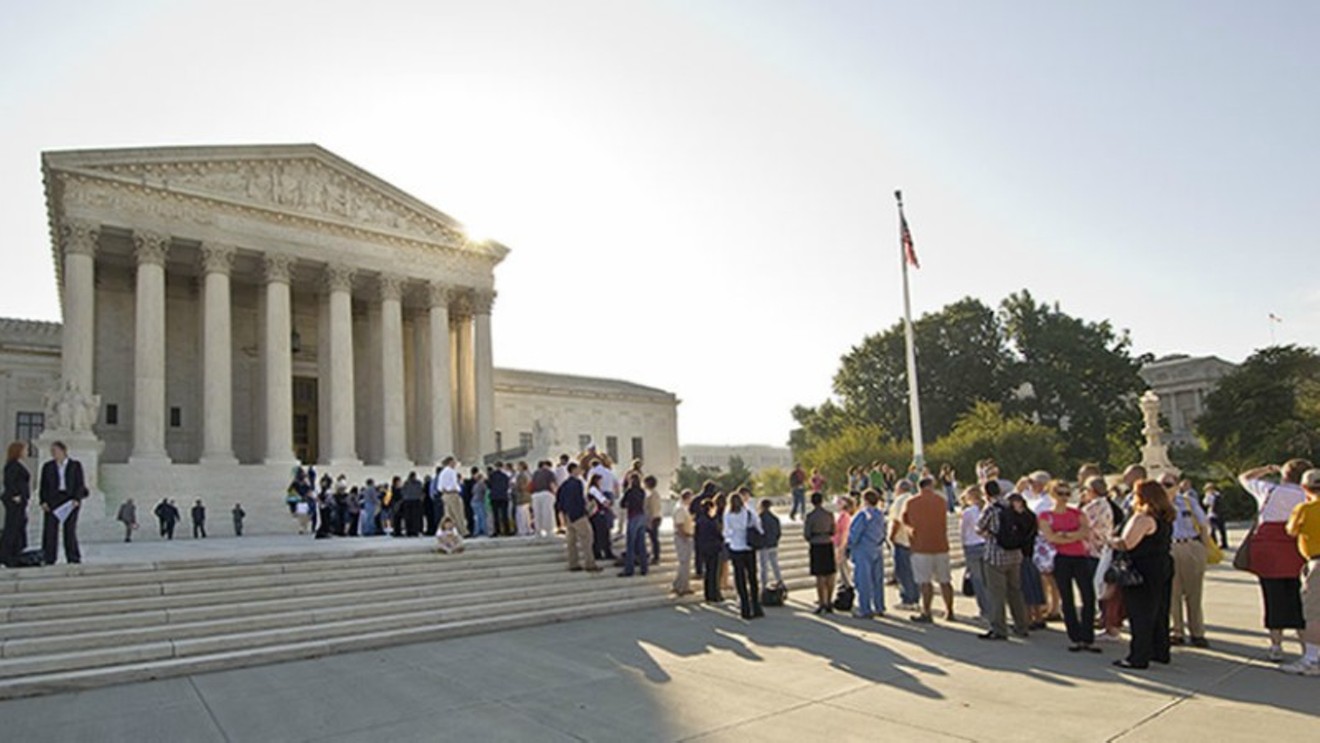 In the next few weeks, Dennis Obduskey will be the focus of a major new case before the U.S. Supreme Court. supremecourt.gov
One of the biggest U.S. Supreme Court cases of 2018, involving Masterpiece Cakeshop owner Jack Phillips's refusal to make a wedding cake for a gay couple, came from Colorado. So, too, does a dispute involving Dennis Obduskey that the Supremes are scheduled to hear early next year. But it's gotten little attention, even though its impact could be enormous.

How enormous? The outcome of this David versus Goliath battle that's been raging for more than ten years could change the way foreclosures are handled in dozens of states across the country, including Colorado — and its importance can be gauged by the powerful interests weighing in on one side or the other.

"In support of me are some Democratic members of Congress in the financial sectors — Maxine Waters and Elizabeth Warren and a couple of others — along with the NAACP and the National Consumer Law Center," Obduskey notes. "And against me are a number of different banking interests, who really don't like it, and the solicitor general from the Trump administration, who filed an amicus brief about it."

The original writ of certiorari in what's formally known as Dennis Obduskey v. McCarthy & Holthus LLP is accessible below, as is a link to the case's SCOTUS blog page, which connects to a slew of additional documents that outline how a very personal hassle has ballooned into a matter of national importance.

Obduskey is unaccustomed to the spotlight, but he's spent a lot of time near it as a result of his longtime participation in Colorado politics. He's currently the chair for the Colorado Democratic Party's platform committee, and he represented Vermont Senator Bernie Sanders on the Dems' national platform committee in 2016, when the group's embrace of his proposal for a federal pathway to marijuana legalization made national headlines. And earlier this year, he ran for the state Senate in District 2 in Park County, where he's lived for most of the past two decades. But, he admits, "I didn't run very hard. I was very clear with people. I said, 'You know, folks, there's a chance given all the stuff I'm going through that I could get thrown out of my house — and out of the district."

The reasons for this last scenario and those that preceded it are, in Obduskey's words, "entertaining and frustrating at the same time." 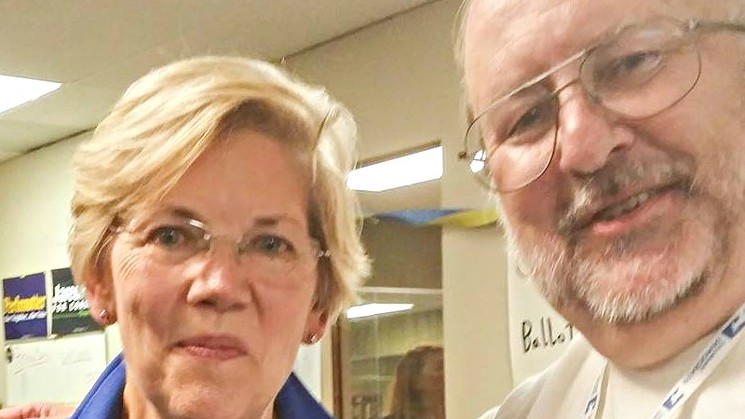 Dennis Obduskey with Senator Elizabeth Warren, who's filed a brief in support of his Supreme Court case.
Courtesy of Dennis Obduskey
According to Obduskey, "I moved to Bailey in 1998, and I refinanced my mortgage in 2007" with the help of two firms headed for doom: First Magnus, which filed for bankruptcy later that year, and Superior Mortgage, a local company that would get in trouble by decade's end. In 2009, a Denver grand jury returned a nine-count indictment against the firm's Kedrick McDuffie for allegedly engaging in a scam that cost borrowers, investors and financial institutions thousands of dollars.

The next year, Obduskey goes on, "I missed three mortgage payments, and Wells Fargo, which was the servicer, offered to help by modifying my mortgage. And this was during my naive stage: When they said they wanted to help, I thought they really did. So I filled out a lot of paperwork and set it up so that new payment amounts would be taken out of my Wells Fargo checking account."

What seemed to be simple turned out to be anything but. Even as Wells Fargo was supposedly helping him get his financial situation in order, the company had also launched foreclosure proceedings — a now-illegal practice known as dual tracking.

Filing for foreclosure in Colorado doesn't require a lawsuit. The state uses a process called non-judicial foreclosure, and in trying to navigate the system, Obduskey ran into obstacle after obstacle. "I could never get answers about who owned the rights to my mortgage," he recalls. "There are things you can submit to mortgage servicers called 'qualified written requests,' where they're supposed to let you know who owns what and how they got it. But Wells Fargo stonewalled on the details for ten years."

Between 2009 and 2012, Obduskey says, three different foreclosure actions were started against him, only to be withdrawn later — and a lawyer he hired to sort through the contradictions didn't have any better luck than he had. 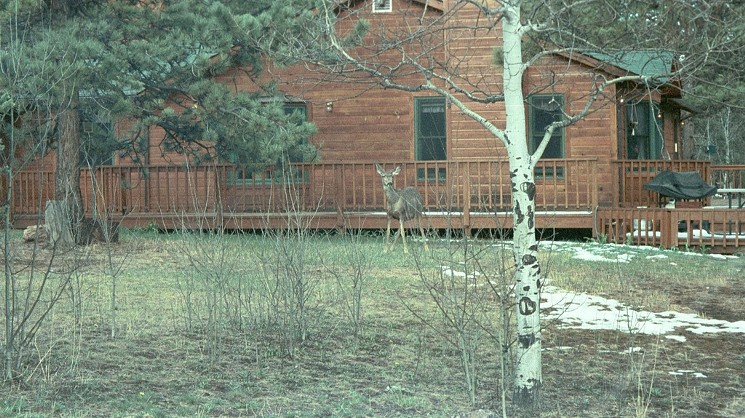 The house in Bailey that's at the center of the lawsuit.
zillow.com
But Obduskey lost that case and a subsequent appeal for reasons that left him slack-jawed. "The Tenth Circuit, which is the appellate court that ruled against me, basically said, 'The FDCPA doesn't apply because foreclosures don't have anything to do with money.' When I heard that, I went, 'Huh?' But that's what they said — that foreclosures have to do with property rights, not money."

After this loss, Obduskey thought he was done. After all, he'd spent the lion's share of his retirement funds on the suit and had nothing to show for it. But within days of the defeat, he reveals, he was contacted by "two major law firms and three universities with high-end law schools — Stanford, Georgetown and the University of Virginia — all wanting to take my case to the Supreme Court at their expense."

In the end, Obduskey settled on attorney Daniel Geyser of Dallas-based Geyser P.C. In March, Geyser filed the aforementioned writ, which summarizes the issues like so:


Congress passed the Fair Debt Collection Practices Act (FDCPA) to "eliminate abusive debt collection practices by debt collectors." Under the FDCPA, the term "debt collector" is defined as "any person...who regularly collects or attempts to collect, directly or indirectly, debts owed or due...another." This case presents a clear and entrenched conflict regarding whether the FDCPA applies in the foreclosure context. In the decision below, the Tenth Circuit, siding with the Ninth Circuit, held that non-judicial foreclosures are not covered by the FDCPA; in doing so, the panel acknowledged the issue has "divided the circuits," and it expressly rejected the "contrary position" of multiple courts of appeals and state high courts. This holding was the sole basis of the decision below, and it arises on the precise fact-pattern that has generated extensive "confusion" and hundreds of conflicting decisions. This case is the perfect vehicle for resolving the widespread disagreement over this important issue.

The question presented is: Whether the FDCPA applies to non-judicial foreclosure proceedings.

The stakes involved in the U.S. Supreme Court's answer are considerable. "It's a pretty high-risk game," Obduskey concedes. "If I lose, the banks and mortgages services end up being off the hook. But if I win, half of the country will end up with laws that will say the FDCPA applies in non-judicial foreclosures."

Dennis Obduskey with Democratic activist Donna Brazile, who mentioned him in her latest book, Hacks: The Inside Story of the Break-ins and Breakdowns That Put Donald Trump in the White House.
Courtesy of Dennis Obduskey
More than half, actually: The legal site Nolo.com lists 29 states, including Colorado, as falling under the non-judicial-foreclosure umbrella.

Oral arguments before the U.S. Supreme Court are slated for January 7, with Obduskey's argument to be countered by the one from McCarthy & Holdus. Wells Fargo is no longer a named defendant in the case, but it remains involved — and its presence previously caused a conflict for Neil Gorsuch, the Coloradan on the court.

"When Gorsuch was a member of the Tenth Circuit Court of Appeals, before he was named to the Supreme Court, he recused himself," Obduskey says. "There was something about 'friends or colleagues' who were part of the case, and I know they weren't me."

Reaching this point hasn't been easy on Obduskey. He's filed for bankruptcy, and while he still owns the house in Bailey that started everything, he's since relocated to Pueblo, his home town, and is trying to figure out how to move his furniture from one place to the other. "My health has taken a beating along the way, too," he discloses.

Still, he says, "I try to keep a good sense of humor about everything. My name is going to be showing up all around the country in things that relate to foreclosures and the Fair Debt Collection Practices Act. It's crazy."

Click to access the petition for a writ of certiorari in Dennis Obduskey v. McCarthy & Holthus LLP and other court documents from the case accessible on the SCOTUS blog.
KEEP WESTWORD FREE... Since we started Westword, it has been defined as the free, independent voice of Denver, and we'd like to keep it that way. With local media under siege, it's more important than ever for us to rally support behind funding our local journalism. You can help by participating in our "I Support" program, allowing us to keep offering readers access to our incisive coverage of local news, food and culture with no paywalls.
Make a one-time donation today for as little as $1.