"I think there’s a lot that the president does on the inside that may not make it to the public," says Torres, who has served as council president pro tem since July 2020. "I think the most important piece is really strong communication with members so that things are not a surprise or blowing up while we’re in a meeting — that there's been some process and conversation as we arrive at decisions."

Torres, who has been a member of Denver City Council since 2019, represents District 3, which encompasses parts of west Denver. Currently unopposed for the president spot, Torres would be taking over for Councilwoman Stacie Gilmore, who has served in the role since July 2020. Councilwoman Amanda Sandoval plans to run for the pro tem slot. Both positions require majority support from Denver City Council.

The council president leads council meetings and acts as team captain, rallying other members to work on shared issues like budgeting. And Torres wants council to take a more active role in a city that has a strong-mayor form of government. "I’m looking forward to that, to be honest with you," she says. "I think we’ve missed out with the pandemic to lead as a body on issues."

But leading more on issues will require expanded resources and funding for council offices. "I think we’re under-resourced, and that’s limited a lot of our district offices from really diving into policy development," Torres says. "All three of my aides handle constituent calls, and we’re the legislative branch; we’re going to be there to advocate for our communities on things. But they shouldn’t be calling us because they can’t get a call back from city departments."

Torres cites Councilwoman Robin Kniech, who serves in an at-large capacity and is term-limited, for having done the "best job" she's seen in "creating a real body of legislative work." But Kniech has been able to do so because she's an at-large member and "not handling constituent requests," Torres notes.

Council presidents typically serve two years in the role, so if Torres wins reelection in the April 2023 municipal election, she'll likely be in the top leadership position as new public officials are sworn in next July. Not only will Denver have a new mayor, but the next council could look significantly different from the current one. In addition to Kniech, Debbie Ortega and Chris Herndon are also term-limited. And although they could run again for a final term, both Kendra Black and Jolon Clark have decided not to seek re-election.

Torres would like to improve the process of orienting new councilmembers. "When I was onboarded, it was not very smooth," she recalls. "I don’t think new offices were set up with budget requirements, how you manage your budget, how you purchase things, what are some of the fiscal rules....and then our central office didn’t have the capacity that it has now."

Denver City Council's central office now has a handful of new employees, including a human resources professional, a fiscal manager and a communications director.

Gilmore, who's again running for her District 11 seat covering Green Valley Ranch, part of Montbello and Denver International Airport, says she'd considered a run for mayor, but decided against it. She's also stepping down as council president after having served during a tumultuous period for the city. 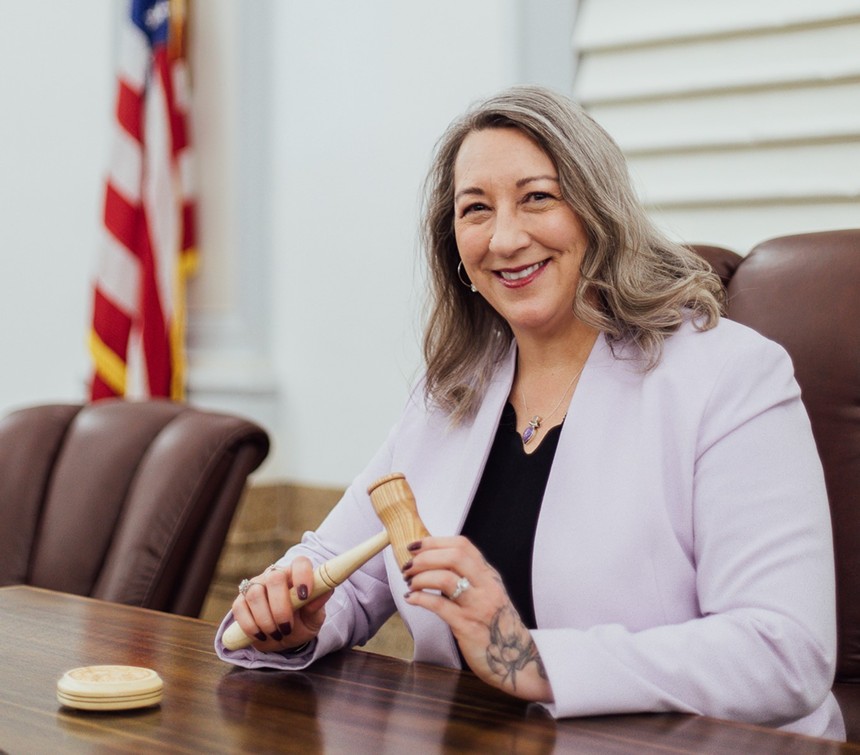 Stacie Gilmore has served as Denver City Council president since July 2020.
Courtesy of Stacie Gilmore
"We were in the throes of the pandemic, but also the civil rights movement," Gilmore says. When Gilmore took over as president, Denver City Council had just gone to an all-virtual setting after racial-justice protesters essentially took over a council meeting for hours and refused to relinquish the podium.

"I became council president on Zoom in my basement in Montbello, which I think is pretty fucking cool," Gilmore says.

Councilwoman Black praises Gilmore's leadership, commending her for bringing councilmembers together to work on shared interests.

"Council wasn’t unified or organized, and she just did a great job bringing us together, setting up systems, getting processes down on paper," Black says. "I think she’s a collaborator, and she takes people’s perspectives and she makes the decision in a really practical way. I think she’s a practical leader, but she listens to other people. She’s very thoughtful about it. She’s not a dictator, she’s collaborative."

As highlights of her tenure, Gilmore points to a better-organized process for negotiating budget priorities with the mayoral administration, which helped expand the much-lauded alternative emergency response STAR program, and growing central office staff. "We also implemented Spanish translation during council meetings," she notes. And she'd still like to see council have a real discussion with the Department of Public Safety about transforming public safety in a way that sends officers to low- or no-danger situations less often.

"I wish that we had been able to get to a place with the administration and the Department of Safety to truly allocate the funds necessary to support people in crisis," Gilmore adds. "I think of the families that are struggling, and they don't have anybody else to call, and so they call 911, and our police officers do the best job that they can possibly do, but they are maybe not the right folks to take that call.

"Whoever is the next mayor of our city, I want to hear that conversation. I want to hear how, as mayor of our Queen City, you're going to instruct or bring partners to the table to deploy those resources to people's front doors, and do it in a respectful way that keeps people safe. That there's no fear of going to jail, there's no fear of a police interaction. We're just here to help."

This story was updated at 2 p.m. June 24 to make it clear that Stacie Gilmore decided against a run for mayor.
KEEP WESTWORD FREE... Since we started Westword, it has been defined as the free, independent voice of Denver, and we'd like to keep it that way. With local media under siege, it's more important than ever for us to rally support behind funding our local journalism. You can help by participating in our "I Support" program, allowing us to keep offering readers access to our incisive coverage of local news, food and culture with no paywalls.
Make a one-time donation today for as little as $1.