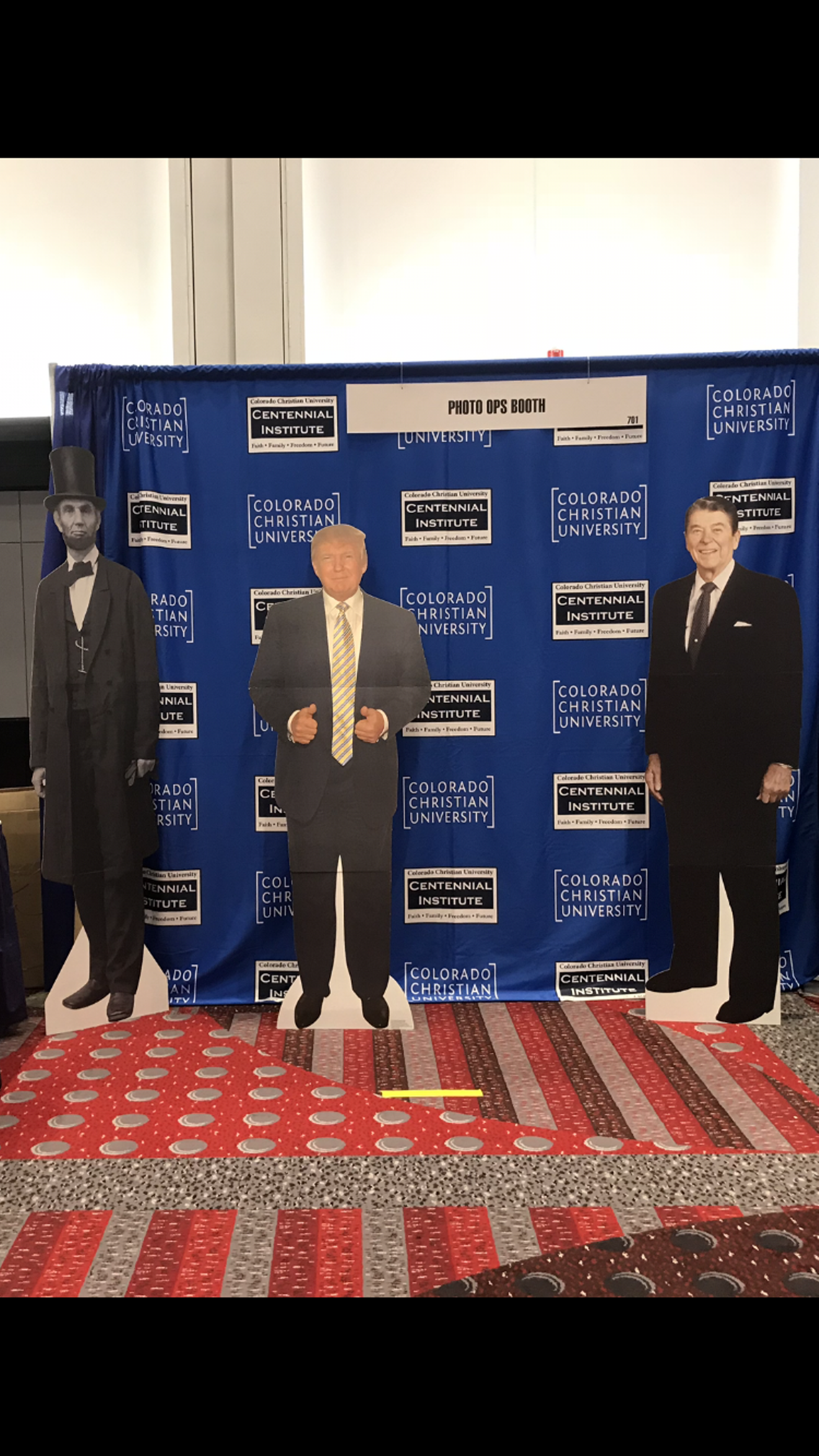 The greatest thinkers of their generations. Westword
The Western Conservative Summit, the "largest gathering of conservatives outside of Washington, D.C.," as it likes to boast, descended on the Colorado Convention Center today, June 8, for two days of workshops and speeches given by luminaries of the right.

In one large hall, Senator Cory Gardner, attorney general candidate George Brauchler and others spoke to convention-goers about the ills of socialism (Gardner) and wanting to take the politics out of Washington (Brauchler). Across the way in another one of the convention center's cavernous enclaves, various conservative groups and candidates hawked merch and pamphlets in advance of today's main event: a speech by Attorney General Jeff Sessions. (Michael Roberts will be there and plans to tell you all about it...if he makes it out of the center alive.)

In the meantime, here are some of the things we saw and heard at the Summit. The exhibit hall.
Westword
Exhibit Hall
Though the main hall hosted the big-name speakers, the exhibit hall was just as informative. Some of our favorite booths belonged to Planned Childhood (like Planned Parenthood, but different), Mission Messiah Television (?), an anti-abortion group with a plastic fetus on display, representatives of the Israeli tourism board, and the Raymond Garcia campaign, which was selling the candidate for House District 21 and snacks, including Snickers bars and bananas. The very hospitable-looking media hospitality suite.
Westword
Media hospitality suite
Admittedly, this was one of our last stops, so we couldn't say for sure whether earlier in the day this room had hosted a cornucopia of refreshments and masseuses waiting to ease our tense shoulders.

Westword
Games
Say what you will about conservatives, they're certainly creative. This booth belonged to Fix Our Damn Roads, a proposed ballot initiative that, if it gathers enough signatures, will ask Colorado voters in November to consider backing $3.5 billion in transportation bonds to fix roads and bridges. Players of this game were asked to drive a toy around the track without hitting a pothole. We lasted about two seconds before bottoming out...just like on Colfax. "GetaRoofGetaGun.com"
Westword
Umm...
Cabela's is covering all of life's essentials.

"Is that Cory Gardner? That's what I need to hear." — convention-goer arriving at the Western Conservative Summit

"I want more Colorado and less Washington, D.C." — George Brauchler, district attorney for Arapahoe, Douglas, Elbert and Lincoln counties and candidate for Colorado attorney general, during his speech in the main hall

"Strong marriage is an antidote to poverty." — Jennifer Marshall, vice president of the Heritage Foundation, during her speech in the main hall

"I'm all about women in leadership!" — convention-goer in exhibit hall

"It's popular to hate Trump." — exhibitor

"You're not as ancient as those of us who listen to Sean Hannity." — convention-goer to me

"You're taking a lot of notes." — exhibitor to reporter

"Have you ever held a fetus?" — convention-goer in exhibit hall

"That's the difference between us and them: They have to wear everything on their sleeve." — convention-goer in exhibit hall

"Faith is really important in our lives. It gives us centeredness." — Republican gubernatorial candidate Walker Stapleton during his speech in the main hall

"Millennials, c'mon, are there any millennials out there?! There've gotta be a few of you!" — speaker in main hall whose question was met with mostly silence

"How about this: Hire someone based on their diploma." — exhibitor

"Nobody worries about the freedoms of cockroaches and rabbits and mushrooms. Vegans might, but I'm talking about rational people." — speaker in main hall

"It was a good crowd."
"And they kept wanting to clap for you!" — speaker to his (presumed) aide, and her response
KEEP WESTWORD FREE... Since we started Westword, it has been defined as the free, independent voice of Denver, and we'd like to keep it that way. With local media under siege, it's more important than ever for us to rally support behind funding our local journalism. You can help by participating in our "I Support" program, allowing us to keep offering readers access to our incisive coverage of local news, food and culture with no paywalls.
Make a one-time donation today for as little as $1.