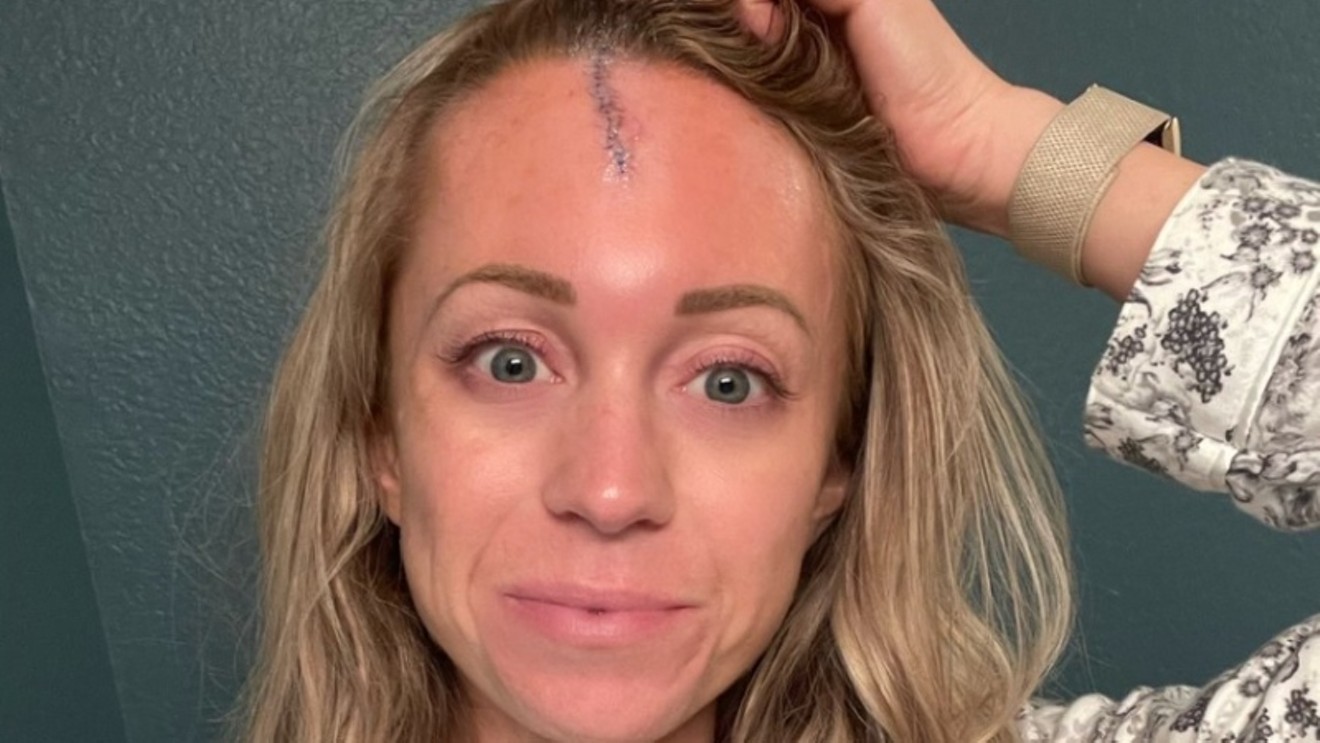 Colorado Rockies reporter Kelsey Wingert showing off her stitches in a photo she shared via Twitter. @KelsWingert
For many fans, watching the Colorado Rockies this season (and most seasons) has been a painful experience. The squad got off to a decent start, but is now under .500, with a 17-18 record, and has lost eight of its last ten games — including a 7-6 contest against the San Francisco Giants on May 16.

But for Kelsey Wingert, a Rockies reporter for AT&T SportsNet Rocky Mountain, that loss was more painful than most, given that she really took one for the team — or, as she tweeted, "Monday, I took a 95 MPH line drive to my head."

Wingert appears to be handling the incident well. But then, she's had experience.

Originally from Sugar Land, Texas, Wingert studied film and television at Louisiana State University, graduating in 2014. Her first TV gig was with KALB-TV in Alexandria, but she quickly made the jump to Fox Sports South — and it was while covering the Atlanta Braves for the network in 2018 that she first earned national attention for getting beaned. She suffered a broken eye socket after being hit by a foul ball smashed by the Philadelphia Phillies' Odubel Herrera.

She describes the incident in this video:
Wingert left Fox Sports in 2019, and this season, she joined the Rockies broadcasting crew — where history quickly repeated itself.

Here's a video of what went down, from the May 16 broadcast.


We all love you, @KelsWingert the entire Farm to Fam is sending you our well wishes and is happy to hear you're doing okay! pic.twitter.com/B7mXbdDxxg

The next day, AT&T SportsNet tweeted confirmation that Wingert "was hit by a foul ball during Monday’s Rockies game. Kelsey immediately received medical attention and we're happy to share that she's doing well under the circumstances. We’re wishing Kelsey a speedy recovery and we'll see her soon on the
@Rockies broadcast."

On May 18, Wingert used her own Twitter account to add details. "I had CT scan to check for internal bleeding/fractures & it came back clear, Thank God. I received internal & external stitches. I’ve been staying at my GM’s house. I can’t say enough about AT&TSN & the Rox. I’ve never experienced support like this. Thank you for the prayers."

That same day, Wingert tweeted the photo at the top of this post along with another compliment for her employers: "The @Rockies & @ATTSportsNetRM have treated me like family. Getting me treatment & to the best hospital ASAP. I was at hospital for 5 hours w/David Woodman (GM of AT&T SN), his wife, Paula & my producer Alison Vigil."

There's been no announcement regarding when Wingert will next cover the Rockies, whose scheduled game at 6:40 p.m. today, May 20, has been postponed because of inclement weather. But when she's back on the job, she might want to ask if there's an extra batting helmet she can use.
KEEP WESTWORD FREE... Since we started Westword, it has been defined as the free, independent voice of Denver, and we'd like to keep it that way. With local media under siege, it's more important than ever for us to rally support behind funding our local journalism. You can help by participating in our "I Support" program, allowing us to keep offering readers access to our incisive coverage of local news, food and culture with no paywalls.
Make a one-time donation today for as little as $1.