Before Kit Carson Rides Off, a Few Words From His Great-Grandson 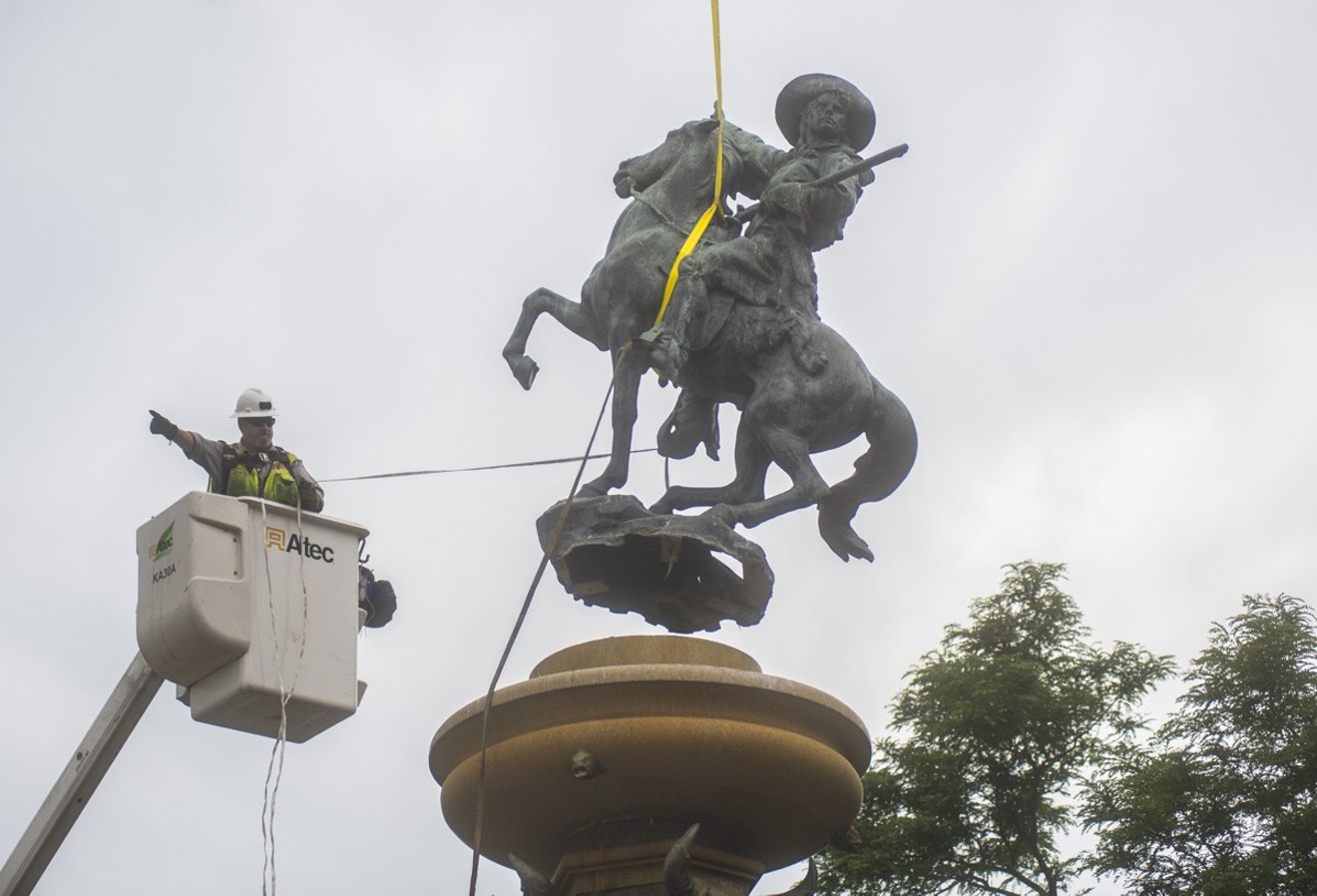 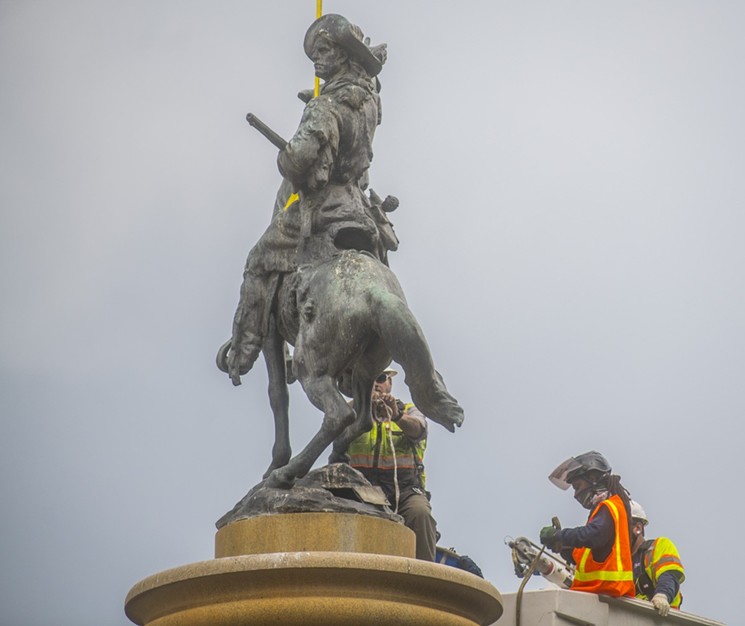 Going, going...
Evan Semón
John Carson is not having a peaceful retirement.

And it just started this week. For the past fourteen years, after leaving a job teaching high school history, he'd been working as an interpreter and ranger for the National Park Service at Bent's Old Fort National Historic Site. His skills earned him an award from the Colorado Tourism Office last year, as an outstanding ambassador for Colorado Hospitality in the Canyons & Plains region, one of eight in the state.

But Carson brought more than enthusiasm and knowledge to his role. He brought a pedigree, not that he made big deal of the connection wile he was on the job: He's the great-grandson of Kit Carson, who worked at Bent's Old Fort himself when it was actually a going commercial concern, not a reenactment.

And now he's seeing his ancestor under attack. A bronze statue depicting Kit Carson donated to the town of Trinidad, along with the park in which it was placed back in 1913, was vandalized last week, when someone wrote the word "murderer" across the front and back in black spray paint.

Days before, a Denver crew had removed for safekeeping the statue of Kit Carson from the Pioneer Monument, installed more than a century ago at the corner of Broadway and Colfax Avenue, the end of the Smoky Hill Trail. The figures on the fountain were designed to depict pioneering characters: the Hunter, the Prospector, the Pioneer Mother and Child. At the top, sculptor Frederick MacMonnies had initially planned to put a Native American chief, but Denver residents objected. Kit Carson was the compromise.

No more. On June 25, the city received a letter from the American Indian Movement of Colorado, demanding the removal of “two racist, anti-Indian icons: the plaque honoring Christopher Columbus in Civic Center Park and the Pioneer Fountain monument. ...The historical moment has arrived for Denver to find the moral courage to begin the process of removal of these vicious and divisive monuments to invasion and colonialism. The removal of these statues will only begin the discussion of the remediation of the history of anti-blackness and anti-indigeneity in Denver, which is epitomized by the ongoing tribute to the African slave-trading, Indian-murdering Christopher Columbus."

The city didn't have a chance to take down the sculpture dedicated to Columbus (though not depicting him): That came down the same night the letter arrived. The next day, the city removed Kit Carson, who will become exhibit A in the city's new community process to review public asset naming...and which already installed assets should remain. 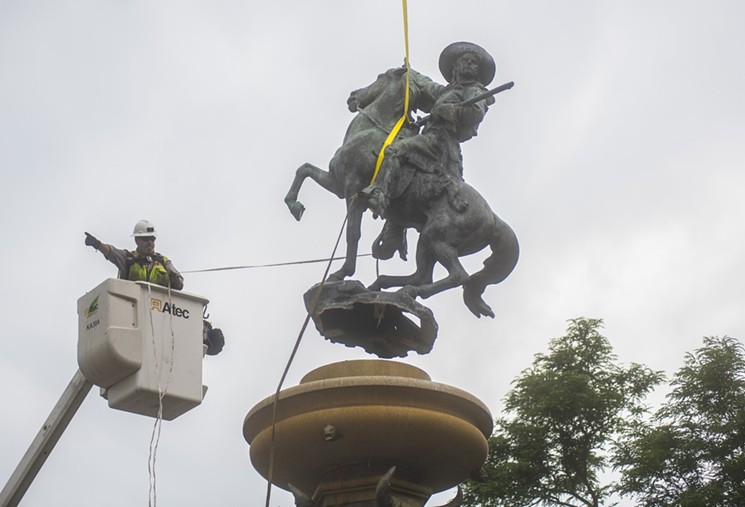 Gone.
Evan Semón
And how does John Carson feel about his ancestor coming down?

Until I called, no one had asked him.

"You can't put it in a newspaper," he says. "It's been going on with Kit since the 1960s, off and on and off and on. Just another battle in the fight to get the real story about the guy."

While controversy over Kit Carson in Denver — a July 5 Denver Post editorial called for the entire Pioneer Monument to be removed — "didn't surprise me," Carson says, he's never heard any proposals for Kit Carson's name to be erased from the small town in Cheyenne County named after the legendary scout, or from the county in northeastern Colorado named for his ancestor. "Them old farmers would have a heyday with that," he says.

And no recent objections to Kit Carson's name have reached the federal level, but back in 2010, the U.S. Board of Geographic Names was asked to switch Kit Carson Mountain to Mount Crestone, and also to give the name Tranquility Peak to the highest point atop the former Kit Carson Mountain. The requests were made because "the individual for whom the summit and nine other features in the State were named is not popular in the community of Crestone. ... They feel that Kit Carson was a war criminal, not a war hero," according to BGN files. The requests were denied, "citing a reluctance to change a name in longstanding published use," among other things.

"This guy lived and did his thing 160, 170 years ago," John Carson explains. "When people ask me about this, I'm more concerned with what people who actually knew him thought of him...at least people who've actually studied the man. It doesn't matter whether they're white, brown, red or purple — you're not going to find too many people who actually didn't have something good to say about him."

But these days, it's not hard to find someone who'll say very bad things about Kit Carson, either. Most focus on how he betrayed the Native Americans he'd spent so much time with early in his life — when, as a lieutenant colonel during the Civil War, he led efforts to force the Navajo to relocate to Bosque Redond, destroying crops and killing their livestock, before they took the Long Walk, for 300 brutal miles, to the reservation in 1864.

As Hampton Sides wrote in 2006's Blood and Thunder: The Epic Story of Kit Carson and the Conquest of the American West: "His contradictions mirror the ambiguities in the whole Western expansion. Because it was a glorious adventure in many ways and an unbelievable shameful act as well."

"I had a prof who said that the United States has become ahistorical," Carson says. "We're losing our history. This is just another example of that, whether it's Robert E. Lee or Kit or Columbus...you aren't going to change anything that happened 160 or 200 or 400 years ago. It's part of what made us who we are."

Literally, in his case. "We know who we are, and we're dang proud of it, and it's family business," he says.

Carson might not be averse to some kind of explanatory plaque going up near the Pioneer Monument, outlining his ancestor's complicated history. That was the solution historians suggested for the Civil War Monument at the Colorado Capitol, which lists Native American massacres as "battles"; the plaque makes it very clear that what happened at Sand Creek, where 200 Cheyenne and Arapaho were killed in 1864, was a "massacre." But that plaque didn't keep protesters from toppling the Civil War Monument last month, either.

“It is so inspiring to hear about the ways people like John are creating extraordinary experiences for those who visit our state,” Colorado Tourism Office director Cathy Ritter said last year in announcing the Colorado Hospitality awards. “Each of these honorees in their everyday work is creating the kinds of memories that vacationers savor and retell long after their trip is done. I thank each and every one of our honorees — and so many others we didn’t hear about this year — for all they do to make our state an unforgettable destination.”

And a very complicated one.

"You do the best you can," says John Carson. "You give people the best true, accurate story you can, then the ball's in their court."
KEEP WESTWORD FREE... Since we started Westword, it has been defined as the free, independent voice of Denver, and we'd like to keep it that way. With local media under siege, it's more important than ever for us to rally support behind funding our local journalism. You can help by participating in our "I Support" program, allowing us to keep offering readers access to our incisive coverage of local news, food and culture with no paywalls.
Make a one-time donation today for as little as $1.