Kroenke Sports & Entertainment plans to redevelop the 55 acres around Ball Arena. Evan Semón
On September 29, representatives from Kroenke Sports & Entertainment, the City of Denver and several architecture firms presented details of KSE's plan to redevelop the 55 acres of parking lots near Ball Arena into a mixed-use neighborhood.

KSE is the company through which the Kroenke family, which owns the Denver Nuggets, Colorado Avalanche and Colorado Mammoth, conducts most of its business in Colorado; the Kroenkes also own the land around Ball Arena where all three teams play. The public presentation was required by the city as part of the Large Development Review Process, and expounded on details of the plan that KSE submitted to Denver in March.

That plan was developed within the framework of the Downtown Area Plan Amendment, adopted by Denver in 2018, which governs development in the Central Platte Valley-Auraria District. It calls for five new bridges, four of which will connect the Ball Arena area to the River Mile, another KSE-connected project being done in partnership with Revesco Properties that will take over the land where Elitch’s currently sits. The fifth bridge will be a pedestrian crossing over Speer Boulevard, connecting the Ball Arena development with the rest of downtown Denver.

The project would extend Wynkoop Street through the Ball Arena area; the developers are calling the proposed new path along Wynkoop from Coors Field to Empower Field at Mile High the “Sports Mile,” though it is longer than a mile in actual distance.

Although it is primarily designed for pedestrians and cyclists, the Sports Mile would allow cars, with designated areas on each side of the street. A row of trees would separate the bike lane from automobiles.

“We've created a 122-foot right-of-way, but that is only two lanes of traffic,” noted Greg Dorolek, a landscape architect with Wenk Associates, during the presentation. “Why would we make something so big? Because we want this to be a really special, tree-lined boulevard and, when you want to create these great urban-canopy streetscapes, you have to provide the room for soil, air and health of the trees.”

Only one of the four bridges to the River Mile would allow cars: the one at Seventh Street, which was previously designated for vehicle traffic during the River Mile development review process.

The bridge over Speer Boulevard will have both a stairway and a circular ramp with a 5 percent grade; it would accommodate bikes and those who use wheelchairs or other mobility devices, and would begin near Wewatta Street and Speer Boulevard, where there is currently a playground. The plan suggests that the playground could be modernized as part of the project, though that would need city approval, as it is on city-owned land. From there, the bridge would lead over Speer.

“We have to get roughly 20 to 22 feet in the air over Speer Boulevard to have the structure of the bridge where we don't disturb traffic and trucks,” Dorolek explained. Because of that, after it clears Speer, the bridge would slowly descend between two buildings onto the Ball Arena property. According to Matt Mahoney of KSE, a key goal of the development is making it safer to travel to and from events at Ball Arena on foot.

The arena, which was originally known as the Pepsi Center, and which KSE acquired when it bought the Nuggets and Avs, could get an upgrade, too. “We're looking to also elevate the arena experience,” Mahoney noted. “The arena itself is twenty-plus years old, and now that we're planning the arena to stay where it is for the foreseeable future, we're examining improvements to the building and potential expansion opportunities.”

Although the development is focused on the arena’s current parking lots, Sadie Cline of ZGF Architects, another firm working on the project, said there would still be enough parking for arena events.

“We are doing a study of the parking right now,” she added. “We understand how important parking is to the function of the arena, and so what we're doing is we're looking at all of the mobility components that we're bringing to the project. We're looking at the utilization rates of the existing lots, and we are building a model around that. We're also looking at precedent projects around the country of arenas and urban areas and how they are dealing with parking.” 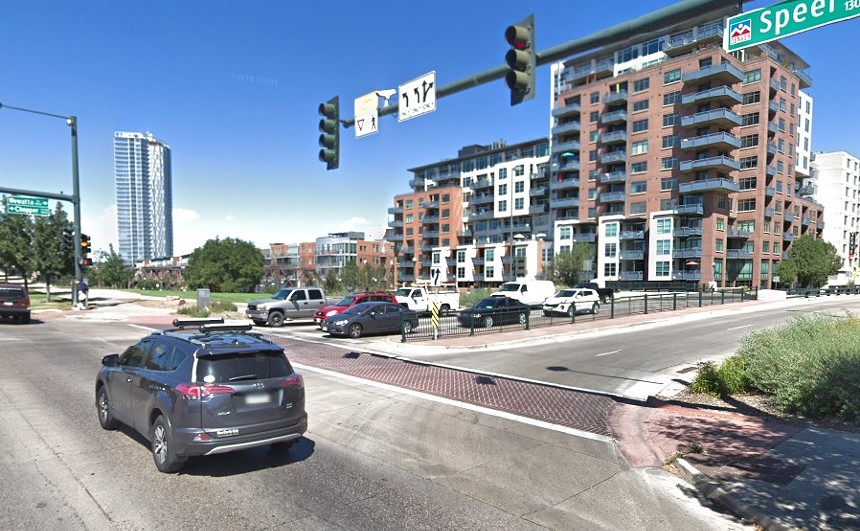 Speer Boulevard at Wewatta Street could soon be the site of a pedestrian bridge.
Google Maps
The project would center around a new community park adjacent to the arena, replacing the current acres of asphalt. Chris Shears of Shears Adkins Rockmore +, an architecture firm that worked on the proposal, said it was modeled after Millennium Park in Chicago, following Denver’s Game Plan for a Healthy City and the Outdoor Downtown master plan.

“One of the major goals of those plans is that every resident in Denver lives within three minutes of a quality open space and a five-minute walk to a neighborhood park,” Dorolek elaborated, showing a graphic of both the Ball Arena and River Mile plans. “We're very proud to boast that if you live, visit or work in the Ball Arena site, you will have access to forty acres of open space within a five-minute walk.”

The proposed park would be about half the size of Civic Center Park, large enough for 10,000-person events or festivals. The design of the buildings that would surround the arena and park have yet to be determined, but would include a mix of retail, business and residential space, including affordable housing.

Before approving large-scale development plans, the City of Denver now conducts an equity analysis to identify gaps that should be addressed by that development. Tony Lechuga, a senior city planner, noted that because most of the development site is currently filled with parking lots, the sample size for the analysis was small and could be slightly skewed.

The area received a 3.44 out of possible 4.00 score on access to opportunity, a 0 for vulnerability to invulnerable displacement (which is the goal), and a 1 out of 5 on housing and job diversity.

“That's driven by the fact that there isn't much housing within this area,” Lechuga acknowledged. “So for us, we're going to consider a few things that we want to see out of new housing, and that includes creating a number of income-restricted units for the area, including a diversity of different housing costs, a mix of rented and owned homes, a diversity of bedroom counts to accommodate different family sizes and situations.”

Missing middle-income housing, and housing in general, would be focuses for the city as it reviews the development plan, Lechuga added. KSE agreed, listing affordable housing as one of its core values for the project.

“With the combined projects of the River Mile and the Ball Arena property, we're looking to create a serious dent in the affordable-housing need in downtown Denver,” Mahoney said. “We'll look to develop affordable units at various income levels, in a range of bedroom counts and dispersed throughout the project.”

In order for the project to be realized, the area will need to be rezoned. Stephen Wilson, a planner with Denver Community Planning and Development, said that the current zoning includes limitations on uses, height and minimum parking that are incompatible with the plan. During the rezoning process, the city will also evaluate whether the developers should be able to alter the Old City Hall view plane, which currently preserves views of the Rocky Mountains from near Larimer Square.

“The views from the origin point currently are largely blocked by existing development that wasn't required, or wasn't subject to, the view-plane requirements,” Wilson noted. “Per the Downtown Area Plan Amendment, there was support for removing or adjusting the view plane once there are design requirements on specific areas within the plan. But again, staff is analyzing these, and they don't have a conclusion so far.”

Public outreach on the plan will continue; Mahoney noted that KSE has met with 21 community and neighborhood organizations so far, and has also held meetings like the one on September 29. Organizations that haven’t yet met with the developer can request to do so through the development website.

Given the breadth of the project, it will take anywhere from ten to twenty years to complete, Mahoney said, adding that the developer plans to reach the infrastructure master plan step by next year. After that, the first phase of development, which might be centered on the two light-rail stations on the property, could start quickly.