5 Reasons Why Lori Saine Is Colorado's Nastiest, Most Clueless Politician 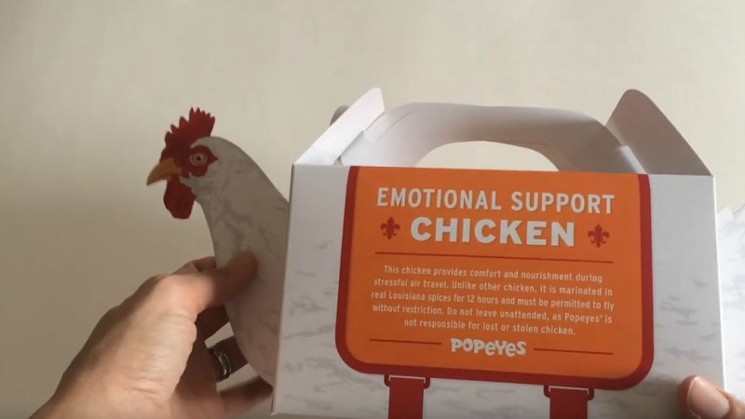 In August 2013, Senator Vicki Marble, a Republican from Fort Collins, tried to address "a number of statistics highlighting racial disparities in the poverty rate" before a meeting of the Economic Opportunity Poverty Reduction Task Force. But her attempt to balance negative data with a positive remark found her invoking a particularly noxious racial stereotype.

"When you look at life expectancy, there are problems in the black race," she said. "Sickle-cell anemia is something that comes up, diabetes is something that's prevalent in the genetic makeup, and you just can't help it. Although I've got to say, I've never had better barbecue and better chicken and ate better in my life than when you go down South and you — I love it...."

Rather than castigating her colleague for her moronic gaffe, Saine brought a box of Popeye's chicken onto the Statehouse floor in what one witness reportedly heard her describing as a "silent protest" against the way Marble had been treated. When questioned about this comment, Saine insisted that she was just having lunch.

Atop her menu: deep-fried racism.

In March 2016, Colorado legislators were debating the Right to Rest Act, characterized by its supporters as a "homeless bill of rights." Among its backers was Representative Jovan Melton, who talked with Westword's Chris Walker about co-sponsoring Representative Joseph Salazar's assertion that "some in the House of Representatives...have made fun of this bill."

According to Melton, "We even saw [that attitude] during the committee hearing with Representative [Lori] Saine’s amendment. [Her amendment], which was defeated, would have added the legislative offices to the list of places where a person could rest. Of course, my office was already covered in the bill, because the Capitol building is owned by the public. But [for Saine] to try and spell it out that way was another assault on the bill."

Melton confirmed that allowing the homeless to sleep outside his office was "the only thing her amendment did. Again, she was, I think, trying to make light of the issue. Even though she said it was a serious amendment, experiencing some of the jokes by their side [like bringing pillows and blankets to my office] before the bill was introduced, it’s my opinion that she was trying to make light of a very serious issue."

The caption on this 2012 Facebook photo of Representative Lori Saine squeezing off a round reads: "See that brown amorphous shape in the center of the photo? I had to post this because Phil Saner actually caught the casing flying towards the camera."
Facebook
Number 3: Gun Crazy

When Saine went to Denver International Airport on December 5, 2017, DIA security found a gun in her luggage.

Her fondness for weapons is hardly a secret. Back in 2013, she spoke to Westword reporter Sam Levin about her sponsorship of a bill "that would give school boards the authority to allow employees of the district to carry a concealed handgun in the buildings and on school grounds — if the employee has a permit to carry."

"There will always be people that seek the same attention that the Aurora shooter is receiving right now," Saine said at the time. Saine also made reference to the tragedy at Sandy Hook Elementary School in Connecticut, where twenty children and six adults had been murdered the previous month. "The timing is perfect" for putting the bill forward, she maintained, adding, "It's time to have this conversation. It's actually past the time to have this conversation. ... It's changing the conversation about what is compassionate — protecting our children in any way that we can."

In the end, prosecutors decided not to charge Saine with a crime for bringing her gat to DIA, accepting her explanation that she'd forgotten having previously put it in her bag.

An attendee at a February 24, 2018, town hall in Erie, held ten days after the deadly school shooting in Parkland, Florida, said Saine attempted to bolster her argument that teachers should be armed by claiming that Columbine killers Eric Harris and Dylan Klebold had supported gun control and lobbied the state legislature to make schools gun-free zones to prevent return fire during the lethal April 20, 1999, attack that took the lives of twelve students and a teacher.

The attendee's account was backed by Scott Ogle, a former TV journalist, who was also at the get-together. "I was highly weirded out by it," Ogle said. "It seems kind of strange that at a town meeting, we get to make up our own facts."

The communications officer for the Colorado House Minority Office, speaking on Saine's behalf, denied that she had weighed in on the Second Amendment views of the teenage murderers. But the attendee provided Westword with an email exchange with Saine, in which she maintained that she'd "found references to the gun control opinions of the Columbine killers with an internet search." Saine didn't supply links in that email, however, and neither she nor the spokesperson provided them to Westword — and our own online searches failed to turn up any information of the sort described in the email.

To mark Martin Luther King Day, Saine posted the video above on her Facebook page along with a caption that reads: "I am honoring Rev. Martin Luther King by speaking out on an injustice that happened in the People's House this last Friday."

Among her comments was this highly dubious assertion: "We have come a long way on that arc since the Reconstruction, when whites and blacks alike were in nearly equal numbers lynched for the crime of being Republican."

To put it mildly, this is not a position accepted by reputable historians of the period. But in an echo of her defense regarding the Columbine misinformation noted above, she told Colorado Public Radio that she'd based this claim on "things she'd read."

She was more fired up, however, that Senator Marble and fellow rep Perry Buck had not been allowed to be primary sponsors of a King resolution because House rules cap the number for such a document at two people from each legislative chamber. In the end, Melton and Representative Leslie Herod, both African-Americans, were the listed sponsors from the House, and Buck signed on as a co-sponsor.

That wasn't good enough for Saine, though. She subsequently shared a Complete Colorado post about the resolution kerfuffle headlined "Rep. Perry Buck and Sen. Vicki Marble Kept From Introducing Resolutions Honoring MLK Jr. Because They Are White."

Don't be surprised if she protests with a box of Popeye's chicken.