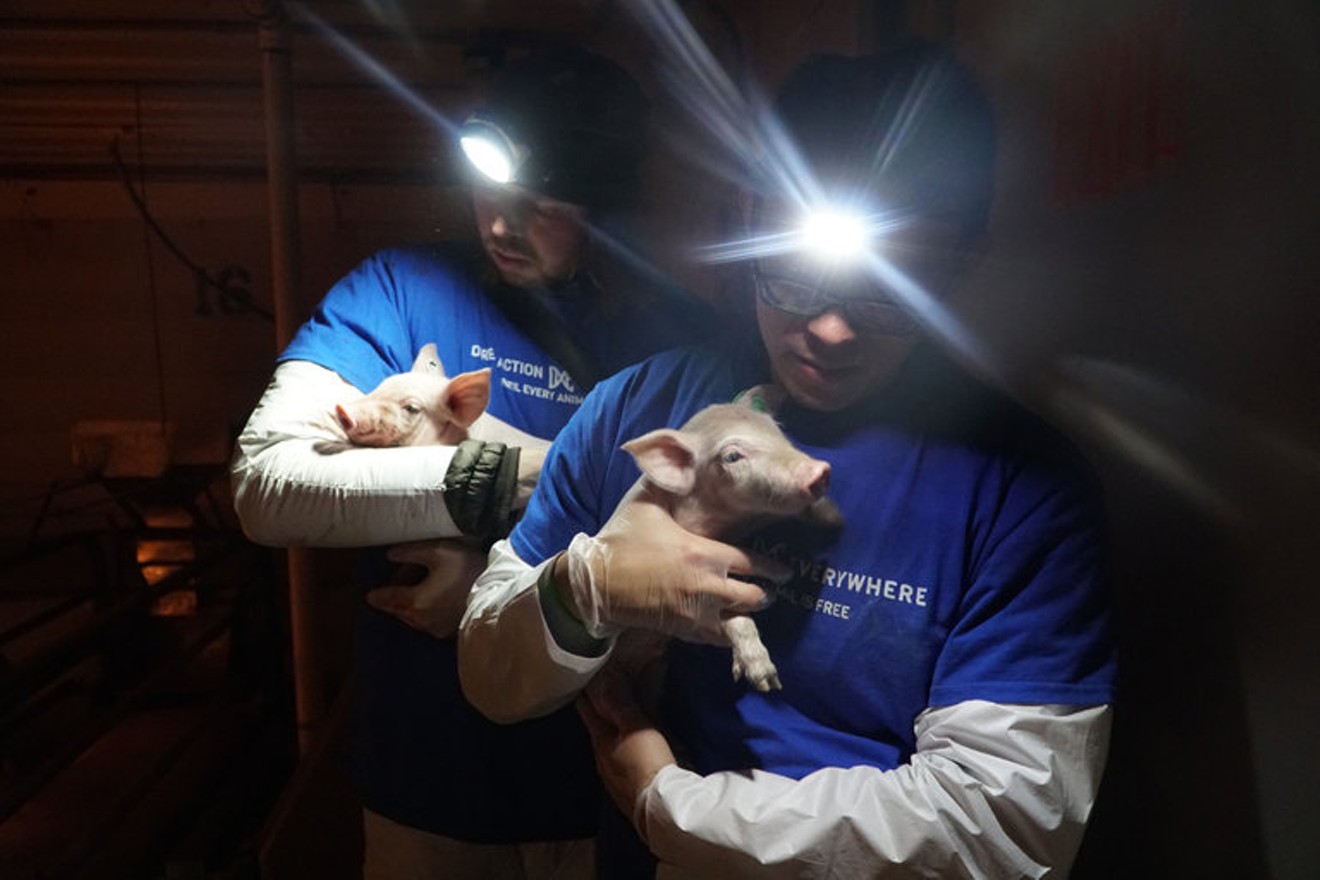 Members of the Boulder-based Direct Action Everywhere "rescued" two pigs from a Utah factory farm in July, as shown in this photo. Now, the FBI is raiding animal sanctuaries to get the pigs back. Direct Action Everywhere
An Erie animal sanctuary got a jolt on Thursday, August 31, when agents from the Federal Bureau of Investigations arrived to allegedly inquire about the status of two pigs — Lucy and Ethel — who were "rescued" by animal-rights activists from a Utah factory farm in early July.

Luvin Arms, a self-described "farm animal sanctuary," is located in Erie and shares volunteers with the Boulder contingent of Direct Action Everywhere (DxE), an all-volunteer force of animal-rights activists who "challenge the idea of speciesism throughout society through creative, nonviolent protest," according to spokesperson Aidan Cook.

One of those tactics, Cook explains, is physically "rescuing" animals from factory farms. DxE has conducted twelve animal rescues so far this year, including the July 6 operation at the massive Circle Four Farms pig farm in Milford, Utah, which was reported by the New York Times.

Luvin Arms declined to comment on the investigation at the advice of its legal representatives but says the organization is not affiliated with DxE. Moreover, Cook would not say whether either animal sanctuary was hiding the two pigs that were rescued from Circle Four Farms.

"Even if we, the humans, are open about participating in it — and, for instance, I can say that it was a Smithfield farm when we did this rescue — we don’t disclose the location that the animals go to protect them from something like this," says Cook.

"Obviously, they think that they have found them," he adds, referring to the FBI.

At Luvin Arms, animals that are spirited away from abandonment or abuse situations are given a loving home, according to its website. Along with several pigs, the sanctuary holds dozens of animals, including chickens, ducks, sheep and cows, who are rehabilitated with veterinary treatment, "love and affection," according to their website.

DxE holds "activist retreats" at Luvin Arms, where the goal is persuading vegans or vegetarians to take more decisive action in protecting the dignity of animals, says Cook, like rescuing animals from harmful situations.

Cook admits that he was personally involved in the July 6 rescue at Circle Four Farms — called "Operation Deathstar" — where the goal was to observe and document the conditions of the farm, which raises 1.2 million animals annually. The operation was not without its risks: in Utah, state "ag gag" laws prohibit private citizens from taking photos or videos at factory farms.

Regardless, DxE activists were equipped with 3-D cameras in order to provide a virtual-reality experience for viewers at home. The video was quickly uploaded to YouTube.

The video appears to show thousands of caged pigs screeching and rattling their pens, and pigs that are sucking blood from their mothers' teats.

During the operation, Cook says that DxE noticed two pigs that were close to death. Activists took the pigs off of the property and have rehabilitated them at an animal sanctuary.

The activists could be prosecuted under Utah's ag gag law for trespassing and theft, and potentially more serious federal charges under the Animal Enterprise Terrorism Act, a 2006 law signed by George W. Bush that gives the Department of Justice — which oversees the FBI — greater authority to prosecute animal-rights activists.

Cook says that federal charges are a possibility, but he's unsure even about the basics of the investigation. "I think that there’s a broad range of possibilities," he says. "Whoever is pushing this investigation has not contacted us at all. We’re doing our best to piece together who even is doing this, and the best thing we have is the search warrant — which seems to be coming from the federal prosecutors in Utah — but we don’t know that for sure because they haven’t contacted us."