Did Republican Leader's Selfie Mock the Death of Girl Killed by Police? Colorado Republican Committee vice chair Priscilla Rahn's July 18 selfie has stirred controversy. Thyris Tattoos Instagram
August 2 marked the official end of the second annual Black Love Mural Festival, an event co-sponsored by the City of Denver and organized by Rob the Art Museum that showcases works by Black artists. This year's collection will remain on display in Civic Center Park through the rest of this week; a highlight is the mural by artist and tattooist Thyris celebrating the life and mourning the death of Ma'Khia Bryant, a sixteen-year-old who was killed by police in Columbus, Ohio, on April 21.

But the piece has seized attention in some quarters for reasons other than its subject matter. On July 18, Priscilla Rahn, a former candidate for University of Colorado regent and current vice-chair of the Colorado Republican Committee, tweeted a selfie showing her in front of the Bryant mural holding a small Thin Blue Line/Blue Lives Matter flag, with six Denver police officers standing near the artwork behind her — and several days later, on this Instagram post, Thyris put Rahn on blast for belittling the memory of a dead teenager.

"I was sent this picture yesterday," Thyris wrote on July 23. "A picture of @rahnforeducation and 6 cops posing in front of my mural of Ma’Khia Bryant. In what I can only perceive as mocking the death of a 16 yr old girl shot to death by the police."

He added: "Regardless of if you feel her death was justified or not, I don’t understand how you can justify mocking a 16 yr old girl’s death, especially as a teacher of children. This is disgusting. I want to know why you disrespected Ma’Khia and her family. Why would you bring hate to a mural festival literally named 'The Black Love Mural Festival'? I want an explanation and accountability from the cops in the picture and @rahnforeducation. Why did you do this?"

The text Rahn, who is Black, had penned to accompany her selfie on Twitter took a pro-police angle: "Backing the blue today at Civic Center Park for the annual Law Enforcement Appreciation Day. Thank you to the Denver police. The Republican Party is committed to supporting you and keeping our neighborhoods safe. God Bless You ALL! #denver #leadright #colorado." Thus far, however, she hasn't elaborated to Westword about her motivation. Although she left a message on July 26 saying she'd be happy to discuss the situation, she hasn't responded to a slew of follow-up messages since then. 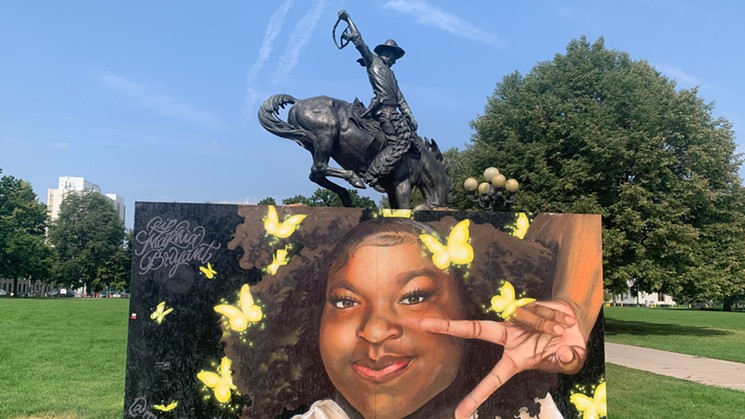 A wide-angle look at Thyris's mural of Ma'Khia Bryant in Civic Center Park.
Photo by Thomas Mitchell
But Thyris says Rahn reached out to him following his post, which generated scads of angry replies. "When she spoke to me, she was really nice and said she didn't do it on purpose," he recalls. "In general, she said it wasn't her thing. She just happened to be there, because she's pro-police."

Likewise, the Denver Police Department maintains that the officers in the photo didn't mean to deride Bryant. Yet the DPD implicitly acknowledges that the presence of the Thin Blue Line flag, seen as a racist symbol by many Black Lives Matter supporters (but not by law enforcement backers), may strike some as derogatory. "Every day, Denver Police officers are encouraged to positively engage with those we serve, which includes posing for photos," a spokesperson states. "This photo was captured when officers were assigned to be in the park for an event and were on a break in the shade to escape the sun during the 90-plus degree day. We recognize the optics of officers standing in front of this particular mural, but believe our officers had no ill intent in posing for the photo."

Rob Gray, who launched the festival amid last year's social justice protests, believes this assertion. "It looks like she set that photo up and those cops were just walking in the park," he says. "And they have a job to do. The officers who worked at the festival were respectful and very kind. They kept things moving, but they weren't aggressive, and they went out of their way for us. So I don't want to frame the officers that way. I think it's all on her."

After hearing from Rahn, Thyris feels conflicted. "It felt like mockery, and when I went to her Twitter page, it all fit the narrative," he notes. "She's a Republican, and there were MAGA hats and her saying things about children and the police. So I can see Priscilla being honest, but it seems like a hell of a coincidence to me. I don't know if the word is racist, because she's Black, but when I see a Blue Lives Matter flag, which came after Black Lives Matter, it's hard for me not to see that as 'Fuck Black people.'"

Whatever Rahn's intent, Thyris hopes the focus can return to Bryant. "We're living in an age of controversy, but this is the Black Love Mural Festival, and I just wanted to represent her life as a beautiful sixteen-year-old girl," he says. "And I think that got lost in all of this."

Click for to access Thyris on Instagram and Facebook.
KEEP WESTWORD FREE... Since we started Westword, it has been defined as the free, independent voice of Denver, and we'd like to keep it that way. With local media under siege, it's more important than ever for us to rally support behind funding our local journalism. You can help by participating in our "I Support" program, allowing us to keep offering readers access to our incisive coverage of local news, food and culture with no paywalls.
Make a one-time donation today for as little as $1.