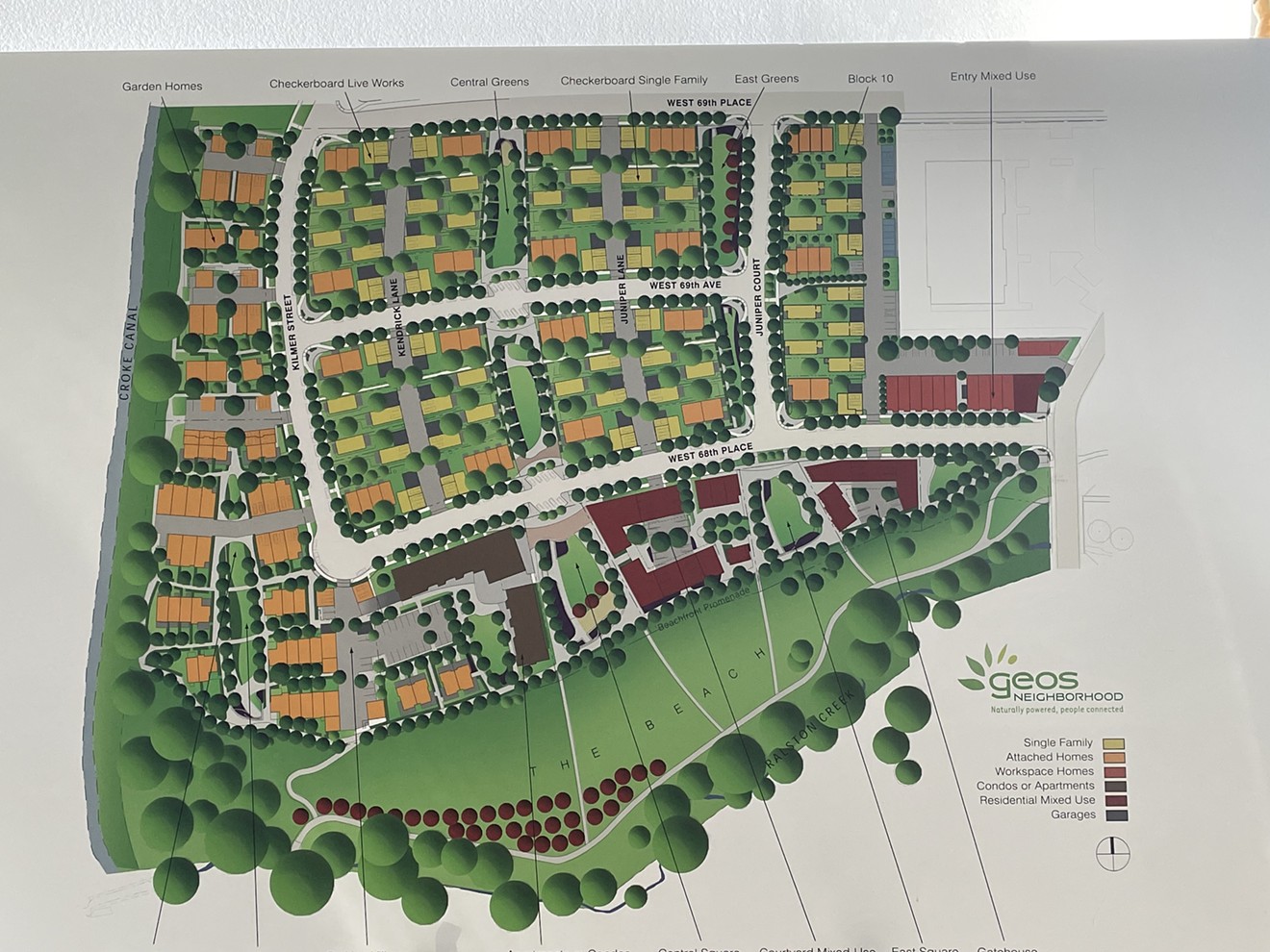 Norbert Klebl's original plan for the Geos neighborhood. Catie Cheshire
Before the Marshall fire destroyed 554 homes in Louisville at the end of December, the city had adopted the 2021 International Energy Conservation Code, which requires new construction to have net-zero greenhouse gas emissions. Now the city is looking at exempting fire victims from the code it adopted in October, because residents say that the added costs to meet the code's requirements could force them to leave the city rather than rebuild there.

But the developer of one nearby community thinks that the price of going green doesn't have to be that high. Construction of the net-zero-energy, 28-home Geos Neighborhood in Arvada involved relatively few extra costs, according to Norbert Klebl, the engineer behind the project.

Klebl’s original vision called for a community that would eventually reach 300 homes, all net-zero energy and free of gas lines, but a divorce settlement in 2020 prompted him to sell much of the land. Still, Klebl says, the revised, smaller version has been a success: All 28 homes have been sold and are occupied. The estimated $20,000 to $35,000 extra in construction costs per green home resulted in a 70 percent improvement in energy efficiency, he adds; that's far lower than the $70,000 extra cost estimates that he's heard in meetings about rebuilding in Louisville and Boulder. And since the new Louisville code only called for a 9 percent improvement over the previous code, the added costs could be much lower, he suggests.

Klebl achieved his energy-efficient goals by following three principles for home-building. The first is orientation: A third of the heating for the homes comes from large, south-facing windows, because that’s where the sun is in the winter, he notes; west-facing windows were limited, to avoid high air-conditioning costs on late summer days.

The Geos homes are arranged in an alternating pattern so that they don’t shade each other. If Louisville residents coordinated with each other, that could help lower costs, Klebl says. “What would be most efficient is to have thirty homeowners, we get together, we throw it into a land bank, and then together we develop a community,” he explains. “I don't think we would be able to achieve that, but I haven't given up yet, because if we get into costs, then people might rethink as a whole.” Grouping home rebuilding projects together could save each about 10 percent on costs, he suggests.

Klebl’s second principle involves tightening the shell of the house: the outside walls and ceiling. The average American home exchanges 100 percent of the inside air every four to five hours just from leakage, he notes; as a result, climate-controlled air on the inside must be constantly replenished.

To reduce leakage, all of the windows in Geos are from Alpen High Performance Products, a Louisville company that produces triple-paned windows with fiberglass frames that don’t shrink and expand as temperatures change, the way more commonly used vinyl windows do. The extra-tight windows are the most costly fixes, adding about $7,000 to $10,000 more per 2,000-square-foot home, Klebl says, adding that those costs can be minimized by having fewer sizes. “When I got the architectural drawings for my house, we had seventeen different sizes of windows,”  he recalls. “I went to the architect — ‘You have to cut this in half’ — and we cut our costs down.” 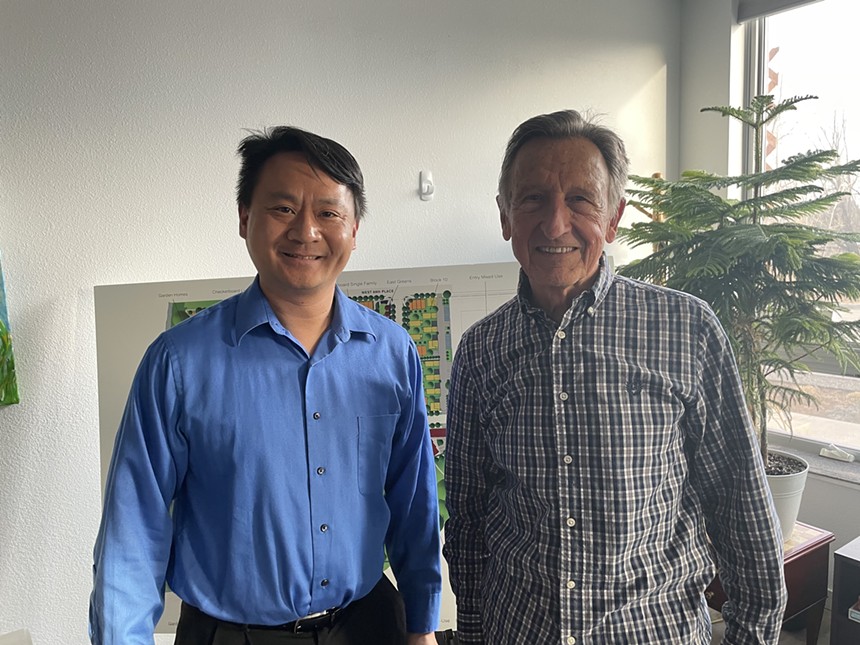 Dar-Lon Chang and Norbert Klebl live in the Geos neighborhood.
Catie Cheshire
Those windows have other benefits: They cut out noise. When Dar-Lon Chang moved into a Geos home after leaving Texas, he says he never heard construction sounds outside. Now a research advisor for a startup, he'd quit his fifteen-year career with ExxonMobil because he realized that oil and gas wasn't a sustainable industry, he explains, and since his family experienced hurricanes Ike and Harvey, he wanted the extra energy security that net-zero homes can provide.


“We went four days without electricity with a newborn, and we don't ever want to go through that again,” Chang recalls. “Even though there won't be hurricanes here, there will be disasters, like wildfires, where we did get a power outage that lasted for about an hour and a half here. If the fire was closer, we might have had more impact.”


The final principle that Klebl relied on to cut costs was using recirculating air and heat pumps to heat and cool homes rather than relying on traditional air-conditioning and gas furnace systems. With adjustments, these homes need less energy to regulate temperature, allowing them to use energy recovery ventilation. Rather than venting heat energy generated in kitchens and bathrooms, ERV brings it into a heat exchanger, heating incoming air on its way out using a heat pump and the already-warm air from inside.

Though Klebl acknowledges that some people view the heat pump as a "mystery" because the technology hasn’t been consistently deployed in American home-temperature regulation, he points out that heat pumps are found in almost every American home in the form of a refrigerator. A heat pump transfers energy from one space to another rather than creating new energy. In the case of refrigerators, it transfers energy out to keep the inside cold. In the case of a home, it can transfer energy in or out based on need.

An ERV system also allows homeowners to monitor air quality, both in terms of carbon dioxide and volatile organic compounds. People can set the maximum amount they want of each in parts per million, and the system automatically kicks in if that level is exceeded. New systems can add UV sanitizers for further cleansing, but Chang and Klebl both say they’re rarely sick even with the older models — and Chang has young children, notorious for transferring germs.

The Louisville green codes require people to install solar panels on their homes or buy into a solar farm. All 28 of the Geos homes have solar arrays on their roofs, which adds an extra cost. But because of the solar panels, homeowners don’t have to pay utility bills — a big benefit, given rising Xcel bills across the state. If residents do have utility bills, it’s likely because they charge electric cars.

Building costs can also increase depending on the size of the home and whether it shares walls with other residences. Small Geos homes or townhouses, such as Klebl’s, use non-geothermal heat pumps. Single-family homes over 2,000 square feet use geothermal heat pumps, which adds an extra cost. Geothermal heat pumps function the same way as other pumps but require a 300-foot-deep hole drilled into the ground so that they can become more energy efficient by using the stable ground temperature, 55 degrees in Colorado, as a baseline rather than ambient air. If everyone in a neighborhood got together and paid for the drilling needed for those pumps, it would allow them to split the $15,000 cost of drilling, Klebl says.

In all, building green in Geos added $20,000 for homes under 2,000 square feet, and $35,000 for homes over 2,000 square feet — plus the cost of solar panels. But Klebl notes that Xcel offers rebates for solar energy, and the company is offering additional rebates of $10,000 or more for people rebuilding from the fire who build new homes that are more energy-efficient. Chang's home cost $600,000; according to Zillow, the average Arvada home value is around $642,000.

Klebl thinks that one reason the reconstruction estimates have been higher in Louisville is that builders are resistant to change. They’re familiar with contractors who can install traditional air-conditioning systems, windows, furnaces and insulation reliably, and don’t want to have to switch to other contractors or re-educate their current ones.

“It's actually a process of change, and they don't want that at the moment,” he says. “They are also busy because there's a shortage of homes, and so they say, ‘Why the heck should I get the headache of having to do something else?’”

Chang has an answer, one derived from his own experiences with disaster: The impacts of climate change, including the Marshall fire, will continue to increase in frequency unless a significant effort is made to make homes greener, he says.
KEEP WESTWORD FREE... Since we started Westword, it has been defined as the free, independent voice of Denver, and we'd like to keep it that way. With local media under siege, it's more important than ever for us to rally support behind funding our local journalism. You can help by participating in our "I Support" program, allowing us to keep offering readers access to our incisive coverage of local news, food and culture with no paywalls.
Make a one-time donation today for as little as $1.