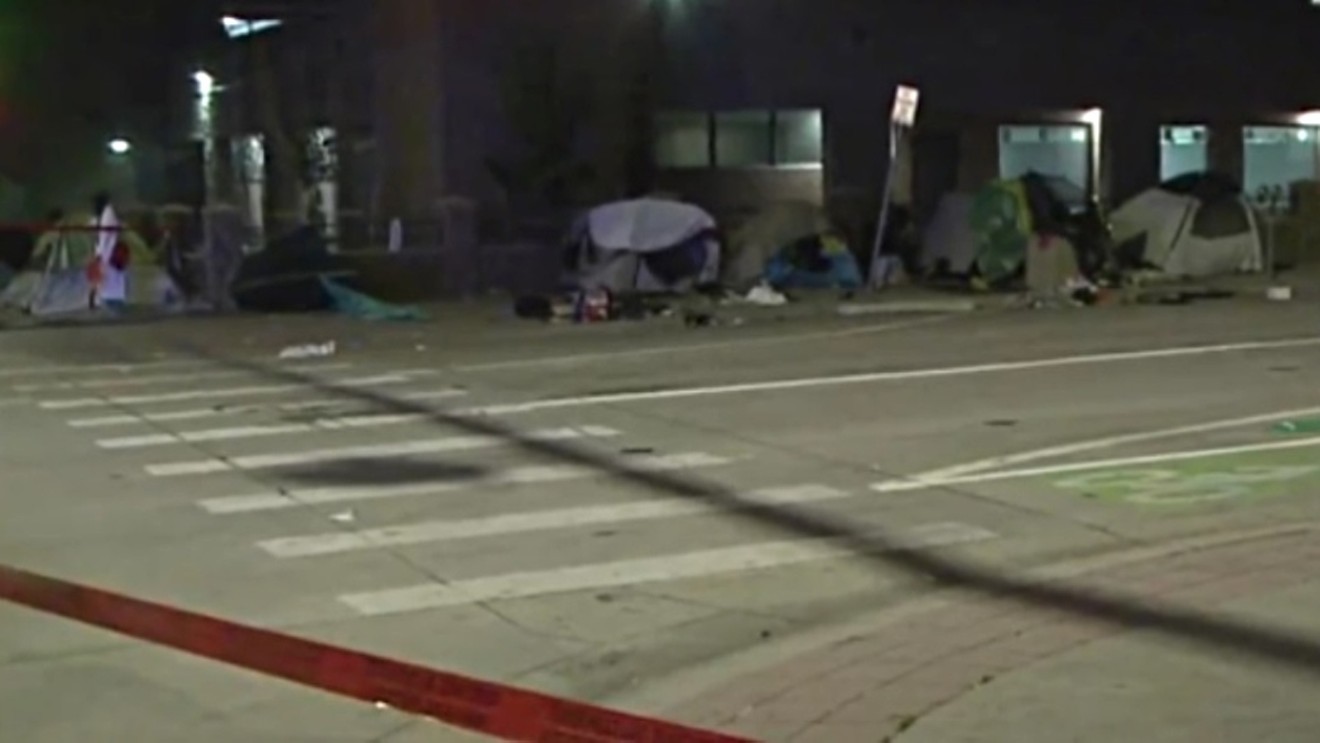 A look at the crime scene. Courtesy of Fox31
Shortly after 4 a.m. today, May 23, the Denver Police Department announced two shootings within seven minutes, including gunplay near Triangle Park that injured three people.

The incidents capped another violent weekend in the metro area, which saw at least six shootings, two of them fatal.

The first of the shootings was announced on the DPD's Twitter account at 1:49 a.m. on May 20; it was in the 1400 block of Yates Street, in the West Colfax neighborhood. In a 9:40 a.m. update, the department confirmed that a male victim had been pronounced dead. "This is now being investigated as a homicide," the tweet noted.

On the morning of May 21, an Aurora Police Department release reported that a shooting had taken place at a party in the area of 2993 South Peoria Street at 3:24 a.m. Two people were hit: an adult male who died at the scene and a juvenile male who was transported to an area hospital with injuries not considered life-threatening.

Hours later, at 8:51 a.m., the DPD noted a shooting that had taken place earlier on the 1700 block of South Bannock Street, in the Overland neighborhood. The victim had been been transported to a hospital in a private vehicle.

The next shooting, revealed at 7:07 a.m., happened in the Civic Center neighborhood, on the 1000 block of Acoma Street. Two adult male victims were located; no specifics about injuries were released.

Cut to 4:07 a.m. today, when Denver Police confirmed that two men and one woman had been shot in the vicinity of 2300 Lawrence Street. That's the address of Triangle Park — an area with a considerable history.

Back in 2006, the city had done a $300,000 renovation job on this slice of land, installing low-maintenance plants in garden beds, as well as easily cleaned benches, and then dedicated "Edward J. 'Eddie' Maestas Park at the corner of Broadway, Lawrence and Larimer streets, renaming Triangle Park after a longtime businessman and neighborhood Good Samaritan who'd always helped the homeless. But the park soon devolved into such a mess that the family asked that the Maestas name come off," Patricia Calhoun reported in an April 8, 2014, Westword post.

The park's politically incorrect nickname at the time? The Bumuda Triangle. In recent years, the park had been completely locked off from the public — but not enough to keep trouble out.

The DPD tweeted about another shooting at 4:14 a.m. One victim was located at the scene — the 500 block of King Street, in the Barnum neighborhood. The individuals' injuries were characterized as "extensive."

Those with information about any of these offenses can contact Metro Denver Crime Stoppers at 720-913-STOP (7867).
KEEP WESTWORD FREE... Since we started Westword, it has been defined as the free, independent voice of Denver, and we'd like to keep it that way. With local media under siege, it's more important than ever for us to rally support behind funding our local journalism. You can help by participating in our "I Support" program, allowing us to keep offering readers access to our incisive coverage of local news, food and culture with no paywalls.
Make a one-time donation today for as little as $1.