Rapper's Sister After His Killer's Sentencing: "Our Family Is No More" 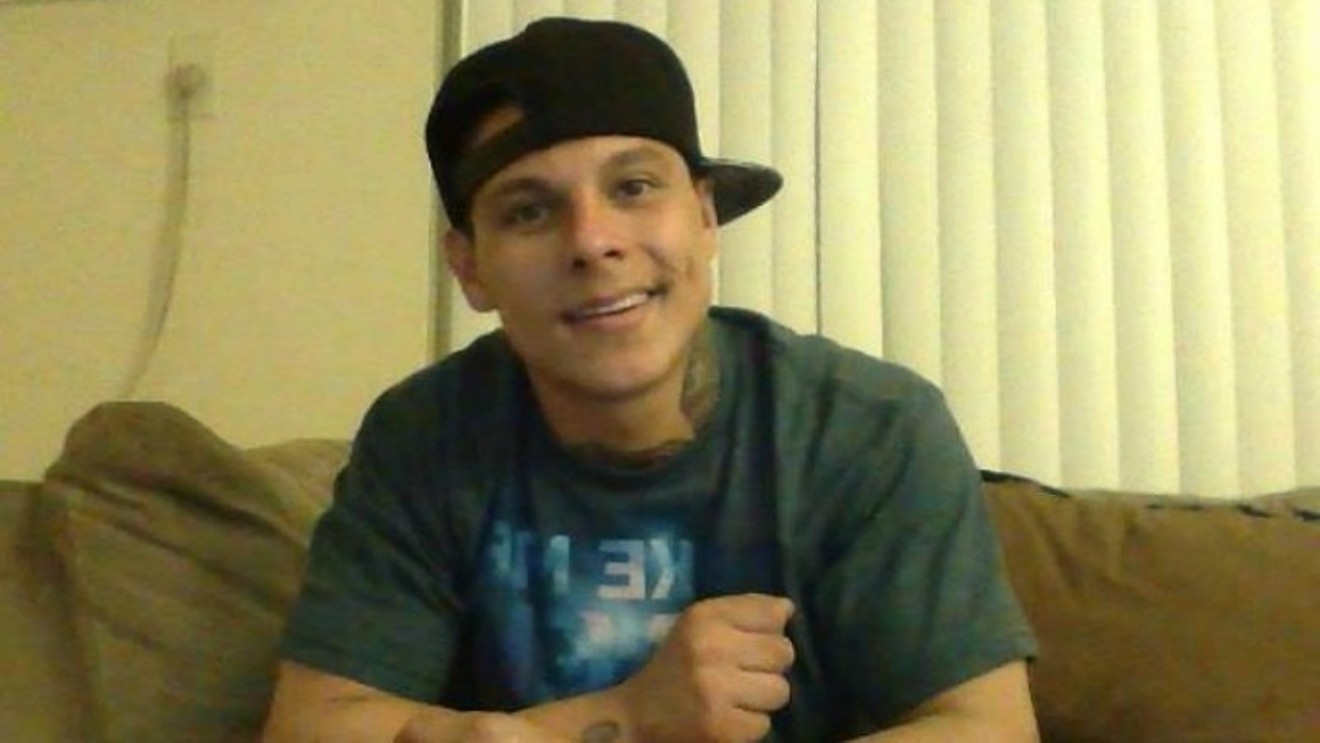 "Now that Michael has gone," she notes, "our family is no longer."

As described in our previous coverage, on view below, Michael and his girlfriend, Amanda Lafferty, were drinking and smoking methamphetamine at the Super 8 Motel in the 5800 block of Broadway in May of last year when he got into an argument with Ocampo. The dispute began with fisticuffs before Ocampo pulled a gun and held it to Michael's head. Michael and Amanda left at that point, but in the motel parking lot, Ocampo, accompanied by Kenneth Bastidos, pulled up in a Jeep Cherokee. Ocampo, in the passenger seat, then opened fire on Michael, killing him as he protected Lafferty.

Bastidos subsequently pleaded guilty to second-degree murder for his role in the homicide. He was originally slated for sentencing on November 9, but the date has been pushed back to December 22.

Afterward, Danielle shared her feelings on Facebook. Here's the entire message, from which the line above was excerpted:


So yesterday we had sentencing for Ocampo, the one who shot and killed our lil bigger brother House. He ended up getting life in prison plus 36 consecutive years on that for attempted murder on Amanda, the girl that was with our brother when it happened. Even though he will spend his life in prison, it will never change the fact that we will never get to see or talk to our brother again and our pain will never go away. Now that Michael is gone our family is no longer and it broke it even more. 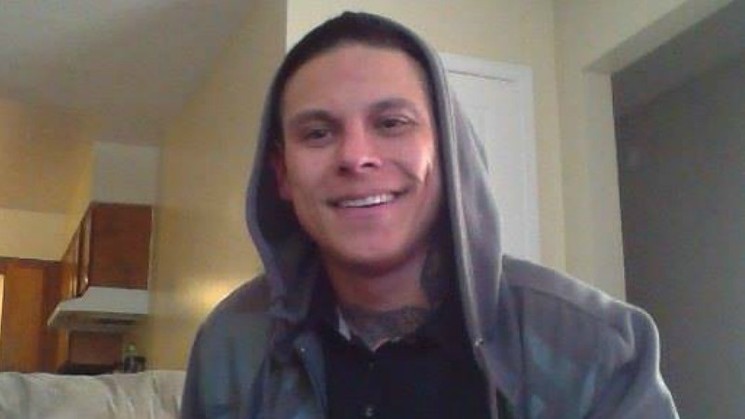 A Facebook portrait of the late Michael House.
Facebook
Original post, 5:54 a.m. October 17: Last year, aspiring rapper Michael House was gunned down in a Lakewood parking lot while defending his girlfriend. Now, Jose Ocampo has been found guilty of first-degree murder in the tragic incident, to which his alleged co-conspirator, Kenneth Bastidos, previously admitted his guilt. The verdict came as a blessed relief to Danielle House, Michael's sister.

"He was found GUILTY on ALL 3 charges!!" Danielle exulted on Facebook yesterday, October 16, after the jury's decision was announced. "Our Brother House got the Justice that he deserves!!"

In a previous interview with Westword, Danielle noted that her brother, whom everyone knew simply as "House," had three children, ages one, two and eight at the time of his death.

Although House and his wife had separated, Danielle added, "he always made sure his family was taken care of. His kids were his world. That's what he wanted in life. He wanted to take care of his babies, and he told everyone he'd always protect them no matter what, even if it cost him his life." She conceded that "he did struggle at times. He was in and out of prison. But he was working on his life, and he had a great sense of humor. He was always the center of attention, and he rapped; he made CDs that he left behind. Now they're the only way I can listen to his voice." The ReverbNation page devoted to the music House made under his musical moniker, Syklone Co3, remains online at this writing. The highlighted song is "Better Place (in the works)." Danielle said "he made it...for our uncle, who passed away, and for our little cousin Joey, who committed suicide. Now this is his song," and it was played at his funeral. Here's the track:

The location: 5888 Broadway, just north of East 58th Avenue near I-25, where witnesses said they heard multiple shots.

Police didn't share any details about what went down in the immediate aftermath of the crime, but at trial, prosecutors with the 17th Judicial District DA's office argued that House and his aforementioned girlfriend, Amanda Lafferty, had gone to the motel to drink and smoke methamphetamine.

Shortly thereafter, the DA's office maintains, House got into an argument with Ocampo that degenerated into a fistfight — one that led to Ocampo pulling out a handgun and holding it to House's head.

At that point, House and Lafferty left the room and headed to the parking lot. Ocampo and Bastidos wound up there, too, inside a Jeep Cherokee. After the vehicle motored up to the couple, Ocampo, who was in the passenger seat, is said to have opened fire on House, fatally wounding him in the process. 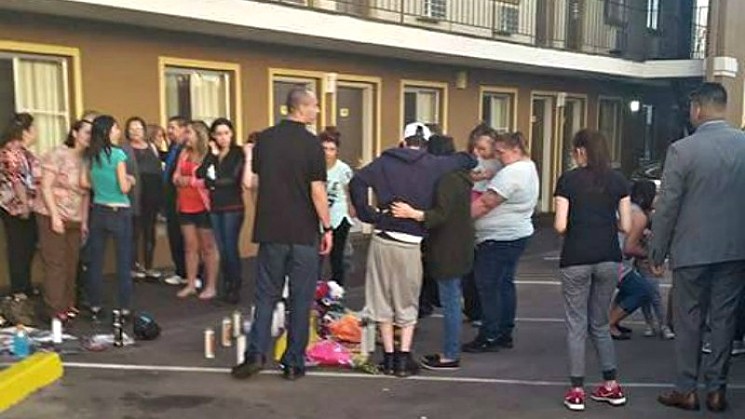 Friends and family at a vigil for Michael House held at the spot where he died.
Courtesy of Danielle House
Danielle revealed to us that House had died protecting Lafferty, who confirmed the sequence of events in a Facebook message posted in the days after the attack.

"RIP My Primary," she wrote. "I love you so much House. I owe my life to you. I will never forget you, Michael."

Authorities quickly rounded up Ocampo, taking him into custody at a Motel 6 in Lakewood.

Bastidos, however, proved more elusive, with law enforcement agencies releasing an alert in which they asked members of the public to stay on the lookout for him, as well as the Jeep that had been used in the slaying.

He was subsequently captured later that month a long way from home — in Flagstaff, Arizona. Danielle noted at the time that Bastidos had "some of my brother's stuff that was left at an apartment where he was staying." 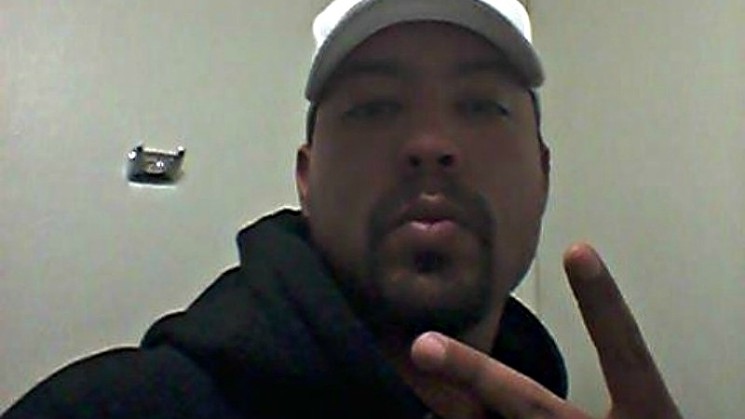 Ocampo will learn his fate just under after a week after Bastidos does likewise; his sentencing hearing will take place on November 15.

The process has been an emotional one for Danielle, who kept friends, family and loved ones up to date on the trial via Facebook posts. In one, she revealed that Lafferty held House's ashes while she testified.

"When we went on break," Danielle added, "she handed the DA a necklace so that I could put some of his ashes in it for her, and when I opened it, I cried."

No doubt more tears will be shed for the man they called House — but not for the men found guilty of killing him.